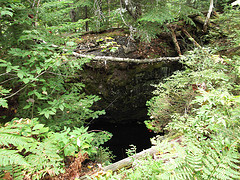 GREAT ATLANTIC RESOURCES CORP. (TSXV.GR) is pleased to announce that it has negotiated a non-brokered private placement of up to 5,000,000 units at a price of $0.05 per unit in the capital stock for total gross proceeds of up to $250,000.  Proceeds from this placement will be for exploration, in particular, to advance the new gold discovery on the former producing Keymet mine property and for general working capital.  The private placement units will consist of one common share and one share purchase warrant.  Each share purchase warrant will entitle the holder thereof to purchase one additional common share of the Company at a price of $0.10 per share for one year from the date of approval.

Closing of this placement is conditional upon approval of the TSX Venture Exchange.

The former Keymet Mine Property consists of 6,480 acres situated in the historic Bathurst Region of New Brunswick and hosts a former producing mine that was located on the property and numerous showings of gold, silver and base metal mineralization.  Keymet has had a brief period as a producer on two of the  lead zinc silver veins.  Great Atlantic’s original concept was to address the bulk tonnage potential that exists with the four parallel known Lead Zinc and Silver veins that have been drill tested over a kilometer long.  The last attempt to mine one of the veins in the 1950’s ended abruptly when the Mine burnt down shortly after production began.

See Mine and 3d model of un-mined zones. 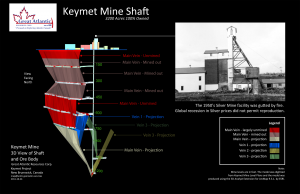 The Keymet property is host to a steeply dipping, high grade Pb-Zn Ag vein averaging 2.5 meters in width, 110 meters in length that was explored intermittently from its discovery in 1909 until being put into production in 1954. A shaft was put down to the 366 m level with production occurring from surface to the 137 meter level. Production ceased in 1956 when a fire destroyed the mine/mill buildings. Up to that time about 80,000 tons of ore were mined.

Exploration activities between the mid 1960’s and 1990 give evidence for the existence of three additional mineralized zones that run parallel to the Keymet vein. These zones have individual strike lengths of 800 to 1200 meters, while the Keymet Vein structure can be traced for almost 1500 meters. These zones  are identified by their IP/soil geochem signatures and wide spaced drill intersections.

In 2011, Great Atlantic Resources personnel discovered a previously unknown gold – arsenopyrite bearing float train, over 450 meters in length and 100 meters in breadth that assayed between 1.7 and 51.0 gpt (grams per tonne) Au.  Till studies indicate that glaciations is west to east.  Trenching at the east end of the boulder train uncovered an 11 meter wide zone that assayed 1.09 gpt Au in an early NNW trending fault structure that is cut by the later “Keymet” style base metal/silver veins. Based on the distribution of the Au – As bearing boulders, it is felt that several of these NW trending mineralized zones exist in close proximity to the trenched discovery.

Compilation work on the historic data shows that the western end of the float train is marked by a strong, coincident, NNW trending, Input/ TEM/air mag anomaly that will be targeted by trenching and diamond drilling in the 2013 exploration program.  As well, drilling and trenching will be conducted to expand upon the “11 meter” zone found in the 2012 trenching and on the four “Keymet” style vein systems evident on the property.