GR Silver Mining Ltd. (TSX-V: GRSL) (OTCQB: GRSLF) (FRANKFURT: GPE)  is pleased to report assay results from the final drill holes to be incorporated into the resource estimation at the Plomosas Mine Area at the Plomosas Silver Project in Sinaloa, Mexico. These results represent wide intersections of predominantly gold and silver-rich epithermal veining.

A listing of significant drill results from the Plomosas Mine Area are presented in Table 1.

GR Silver Mining President and CEO, Marcio Fonseca commented “This final batch of drilling results from drill holes PLI21-10 and 14, represent a step out of approximately 150 m to the north from the closest underground information in the Plomosas Mine Area. As a result, they confirm the presence of attractive gold and silver epithermal mineralization in unmined zones of the historic Plomosas Mine Area. These results represent the delineation of new prospective host rocks defining additional targets for future drilling beyond the area of the maiden resource estimation, which is currently in progress.”

The gold mineralization, as evidenced in drill holes PLI21-10 and 14, is hosted by hydrothermal breccias which commonly include irregular colloform banded quartz veins related to a NW-oriented structural trend. This mineralization style is illustrated by the core samples displayed in the following link: (see Link to Core Photos).

The following figure (Figure 1) illustrates the location of all surface holes released to date on the Plomosas Mine Area and a select group of results representing the Ag-Au rich mineralized intervals that are currently being incorporated into the maiden resource estimation for this area.

The discovery of precious metal only mineralized epithermal veins has encouraged the Company to pursue an extensive surface core drilling program, outside of  areas under resource estimation, such as at Plomosas South (see News Release dated June 21, 2021), with the objective of identifying new discoveries in H2|2021.

GR Silver Mining’s 6,574 ha Plomosas Silver Project is located near the historic mining village of La Rastra and within 5 km of the Company’s San Marcial Silver Project, in the Rosario Mining District. The Project is a past-producing asset where only one mine, the Plomosas lead-zinc(-silver-gold) underground mine, operated a 600 tpd crush-mill-flotation circuit from 1986 to 2001, producing approximately 8 M ounces of silver, 73 M pounds of lead and 28 M pounds of zinc2.

The Company recently completed a drilling program with surface holes focused on expanding known mineralization along strike in two areas, the Plomosas Mine Area and the San Juan Area. Underground drilling included in the program targeted the extension of recent Au-rich discoveries at the lowest level (775 m RL, or ~250 m below surface) of the Plomosas Mine Area and six low sulphidation epithermal veins at the San Juan Area. Both areas are currently the subject of NI 43-101 resource estimations.

San Marcial is a near-surface, high-grade silver-lead-zinc open pit-amenable project. The Company filed a National Instrument 43-101 (“NI 43-101”) report entitled “San Marcial Project Resource Estimation and Technical Report, Sinaloa, Mexico” having an effective date of March 18, 2019 and an amended date of June 10, 2020 (the “Report”), which contains a 36 Moz AgEq (Indicated) and 11 Moz AgEq (Inferred) resource estimate. The Report was prepared by Todd McCracken and Marcelo Filipov of WSP Canada Inc. and is available on SEDAR. The company recently completed over 320 m of underground development in the San Marcial Resource Area, from which underground drilling is planned to expand the high-grade portions of the resource down-dip. The Company recently discovered additional mineralization in the footwall, outside of the existing resource, and will also be drilling this area. GR Silver Mining is the first company to conduct exploration at San Marcial in over 10 years.

The La Trinidad Project was acquired in March 2021. While La Trinidad has been the focus of artisanal mining activity over many decades, commercial operations began late in the 20th century. Anaconda Minerals Corp. was first to drill the project in the mid-late 1980s. After initially taking up an option on the Project in 1993, Eldorado Gold Corp. then commenced an open pit gold mine at La Trinidad in 1995, known as the Taunus Pit, with ore being processed via a heap leach operation. The mine operated until 1998, producing approximately 52,000 oz of gold3.

Exploration undertaken by Oro Gold from 2006 identified additional resources below the Taunus Pit and operations recommenced late in 2014. Gold output from the heap leach pads continued until late 2019 for a total cumulative production by Oro Gold of 112,000 oz gold4,5. In addition to La Trinidad, the portfolio acquired by GR Silver Mining includes an extensive regional database of geological, geochemical and geophysical information resulting from historical exploration expenditure by Oro Gold of more than CDN$18.6 M since 2006.

Cimarron is another advanced stage project that was acquired along with the La Trinidad Project in March 2021 and is located 40 km to the NW of La Trinidad. A number of targets have been identified at Cimarron including Calerita, El Prado, Huanacaxtle, Betty and Veteranos, however Calerita is the only target to have been drilled to date. The near surface historical Inferred Resource at the Calerita prospect contains 3.7 Mt at 0.65 g/t Au for approximately 77,000 oz of gold6, which is considered to be open along strike and down dip. 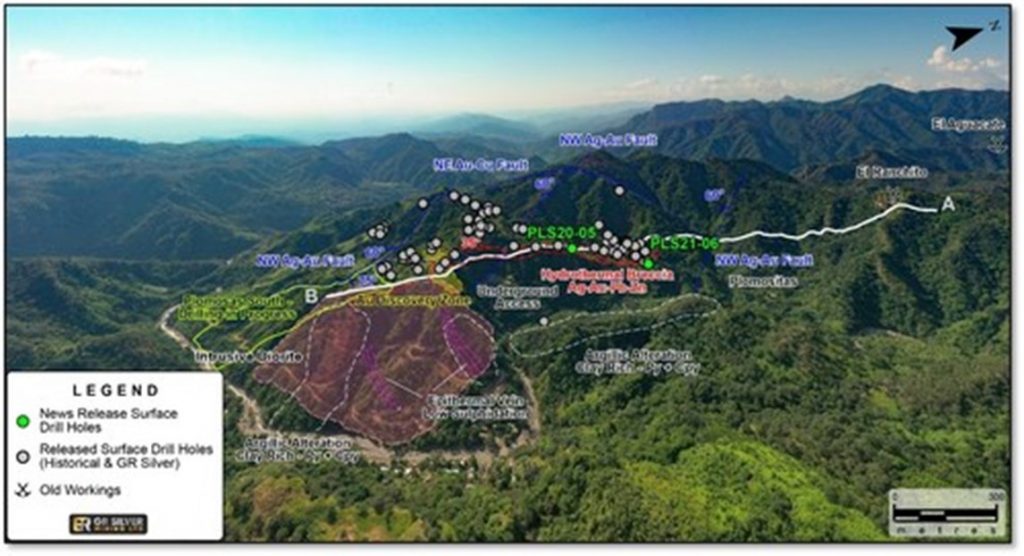 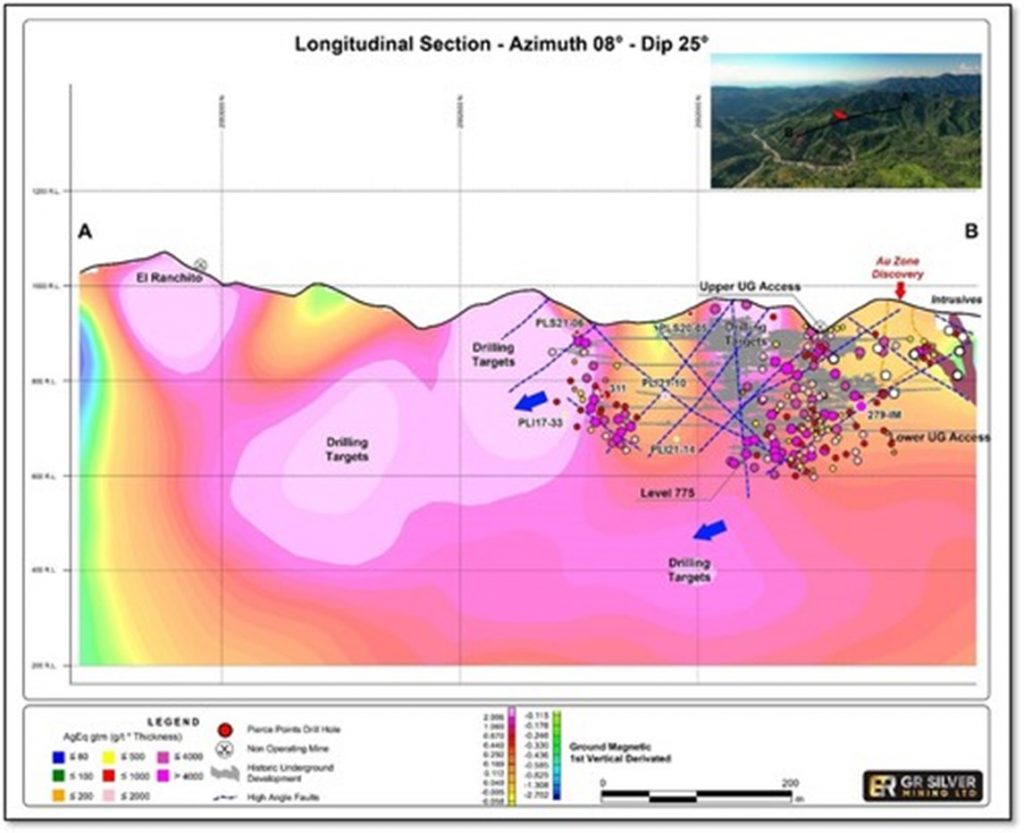