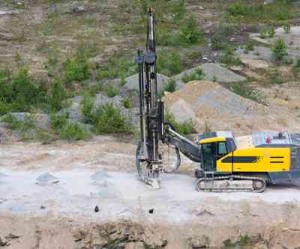 Goldsource Mines Inc. (TSX-V: GXS) (OTCBB: GXSFF) (FWB: G5M) announces revised 2016 production guidance range of 600 to 800 ounces of gold, down from previous guidance of 1,400 to 2,100 ounces of gold. The drop in Phase I Proof of Concept production guidance for 2016 primarily reflects lower than expected throughput and recovery as well as unexpected downtime related to equipment and water availability for the Eagle Mountain Saprolite Gold Mine.

The Company previously announced starting a night shift in Q4 2016 to increase throughput to 1,500 tpd by December 2016. Given the recovery issues and water related throughput constraints, the Company has deferred the night shift until the process plant has been optimized for designed throughput and recovery.

In early September, the Company began processing higher grade material from Pit #4, with the average grade increasing to 1.21 g/t gold, up from the average grade of <0.35 g/t gold in June and July 2016. While the head-grade improved substantially, the gold recovery from the Falcon concentrators (“Falcon”) dropped to average of approximately 15% in September and an estimated 17% in October, short of the targeted minimum recovery rate of an estimated 30% for economic viability. In early October, Goldsource hired a qualified process engineer to optimize the plant at Eagle Mountain to improve throughput and recovery for the gravity only operation. The most recent production results for the first week in November suggests that recovery has improved to an estimated 24% with further optimization work ongoing.

The Company produced 137 ounces of gold in September and 78 ounces of gold in October. Production during these months was materially impacted by equipment related downtime and water shortages due to the dry season. Critical equipment is currently being upgraded to reduce downtime and a new reservoir is expected to be online in mid-November which should address water availability. Onsite management is also testing the potential to improve throughput by liberating more gold from the oversize material using a small crusher. The Company is working closely with Sepro Mineral Systems Corp., designers of the Eagle Mountain plant, to understand and test the current plant recoveries of 20 to 25% versus lab test work showing optimized gravity recoveries of 50 to 60% that was completed for the Eagle Mountain PEA Technical Report.

The sub-optimal performance of the gravity recovery plant requires further test work which will result in a delay in the phased expansion of the Eagle Mountain Mine. The Company has deferred Phase II capital purchases in order to focus funds on plant and recovery optimization rather than expansion. Management is targeting the completion of further test work on plant optimization with potential improvement to gold recovery rates by mid-December.

As of November 14, 2016, Goldsource has C$686,000 in cash (including C$261,000 in restricted cash). The Company is exploring financing alternatives to address working capital requirements and fund

Goldsource Mines Inc is a Canadian resource company that is currently in the Proof of Concept Phase at it 100%-owned Eagle Mountain Gold Project, located in Guyana. Goldsource is led by an experienced management team, proven in making exploration discoveries and in project construction.