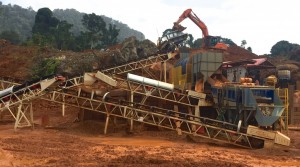 Ioannis Tsitos, President, commented, “We continue to make improvements at Eagle Mountain by increasing throughput and gold recovery through our optimization program with the goal of achieving free cash flow from operations. In Q4, throughput increased 13% and plant recoveries increased by 8% which, when combined with improved mine grades, led to a gold production increase of 45% compared to previous quarter. The process plant (“Main Plant”) was shut down on December 23rd for equipment installation including replacement of pipelines, pumps and a Krebs cyclone which should further increase throughput and recovery in early 2017. Beginning early February we plan to operate a low cost “Secondary” gravity operation and reduce corporate and in-country costs to supplement cash flow. Overall, 2016 was a challenging year with a variety of factors affecting throughput and lower than expected recovery. Management remains optimistic that the initiatives scheduled in early 2017 will further address the throughput and recovery issues. In association with ongoing work, we will consider permitting a substantially larger operation supported by a planned expansion of saprolite resources.”

(1)  Based on 25 operating days per month
(2) All numbers are rounded.
(3) Daily production sampling at site is analyzed offsite at Actlabs in Georgetown, Guyana, which is an independent certified lab. Standard practice mined volumes are used and drill hole assays, also from Actlabs, are used for mine reconciliation.

During Q4, 2016, Eagle Mountain processed 39,513 tonnes of material (Q3, 2016: 35,043 tonnes), with an average of 527 tpd (Q3, 2016: 467 tpd) grading 0.98 gpt gold. As previously announced in the Company’s revised production guidance (see news release dated November 14, 2016), operations in the second half of the year were interrupted by equipment delivery delays, faulty pumps, and drought conditions. In November, the process was altered to bypass the recirculation of plus 2mm oversize material and to stockpile it in inventory. This significantly decreased plant maintenance requirements with less downtime and improved throughput. By mid-December, operations were running continuously at near capacity. In December (to the 23rd), the mine operated for 18 days, processing 12,497 tonnes of material at an average throughput rate of 694 tonnes per day. Estimated gravity recovery to concentrate averaged 27% for Q4, 2016 (Q3, 2016: 25%).

While onsite management was able to incrementally improve gravity gold recovery to concentrate in Q4 to 27% (up from 25% in Q3), the recovery rate remains well below design of 35-40% for a gravity only operation. As a result, the Main Plant at Eagle Mountain was shut down on December 23, 2016 and one half of the workforce at Eagle Mountain was released to reduce in country costs while the Company completes further plant modifications intended to improve throughput and recovery.