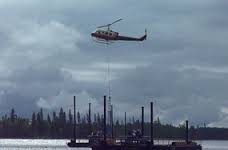 Gold Canyon Resources Inc. (TSX-V:GCU) (PINKSHEETS:GDCRF) is pleased to announce it has completed three years of environmental surveys required to quantify aquatic habitat at its 100% controlled Springpole Gold Project located approximately 110 km northeast of Red Lake, Ontario. These surveys have uncovered no prohibitive issues. Initial discussions have been held with the Department of Fisheries and Oceans Canada (DFO) to review the findings of these surveys and discuss next steps towards a fisheries offset agreement, a key item necessary to move the Springpole Project forward. Using guidance from the DFO, the Company is currently working to identify opportunities in the region around Springpole to create and/or improve aquatic habitat to offset habitat displaced by any potential future mine plan. Once all opportunities have been identified, they will be reviewed and assessed during further discussions with the DFO. Some potential offset initiatives may be suitable for working with local First Nations communities, an opportunity Gold Canyon would welcome. The Company plans to continue to collect additional data on fish habitat to augment its already robust dataset.

“We are very pleased to receive very positive feedback from our aquatic habitat studies and find there are no prohibitive issues at Springpole,” commented Akiko Levinson, President, CEO and Director of Gold Canyon.

In a news release dated March 25, 2013, Gold Canyon announced a Preliminary Economic Assessment prepared by SRK Consulting (Canada) Inc. of Vancouver, British Columbia for the project. This PEA provides preliminary support for a potential conventional open-pit mining and milling operation. At a 5% discount rate and a US$1,300/oz gold price, the project, has an estimated pre-tax net present value of US$579 million, a pre-tax internal rate of return of 25.4%, and a non-discounted payback of just 1.7 years. Other highlights of the project include:

During the current depressed state of the junior mining sector, Gold Canyon has reduced costs across the board. Although cost reductions have kept the Company from aggressively pursuing plans for taking Springpole to bankable feasibility and the associated environmental assessment process, the Company recognizes that undertaking certain initiatives such as the environmental studies discussed in this news release, as well as securing long term leases for the project area, are critical to keeping the project moving forward. Upon receiving recommendations made by expert consultants, the Company plans to continue to implement the vital work needed to advance the project and minimize associated risks.


Gold Canyon is engaged in the acquisition and exploration of mineral and precious metals properties. The Company controls a 100% interest in the Springpole Gold – Horseshoe Island Gold, Platinum, Palladium Project and a minority interest in the Favourable Lake Poly-metallic property currently under option to Guyana Frontier Mining Corp. pursuant to an option and joint venture agreement entered into in December 2005 – all in the Red Lake Mining District of Ontario, Canada.

Springpole is an alkaline intrusion hosting a gold system that represents a potentially new style of Canadian Archean Shield gold deposit. Over the last five years, the Company has completed over 85,000 meters of drilling at the project. The Portage Zone is hosted by a trachytic porphyry intrusion displaying polyphase autolithic breccias that host gold mineralization. Other zones, including the East Extension and Main, consist of high-grade veins and pods hosted in diatreme breccias composed of intrusive and country rock fragments. These breccias surround the northwest and northern margins of the Portage Zone. The known mineralized zones underlie a total known area of about 4 square kilometers representing only about 15 percent of the greater alkaline intrusive complex which remains yet to be explored.