“Our continued drilling program at El Favor East shows additional positive results.  Our program is also focussing on Gran Cabrera in the northerly section of Los Ricos North, and we expect to provide an update on that shortly,” said Brad Langille, President and CEO. “In addition to our drilling, we continue to work on consolidation of additional ground in Los Ricos South and expect to have an update on this in the coming weeks.” 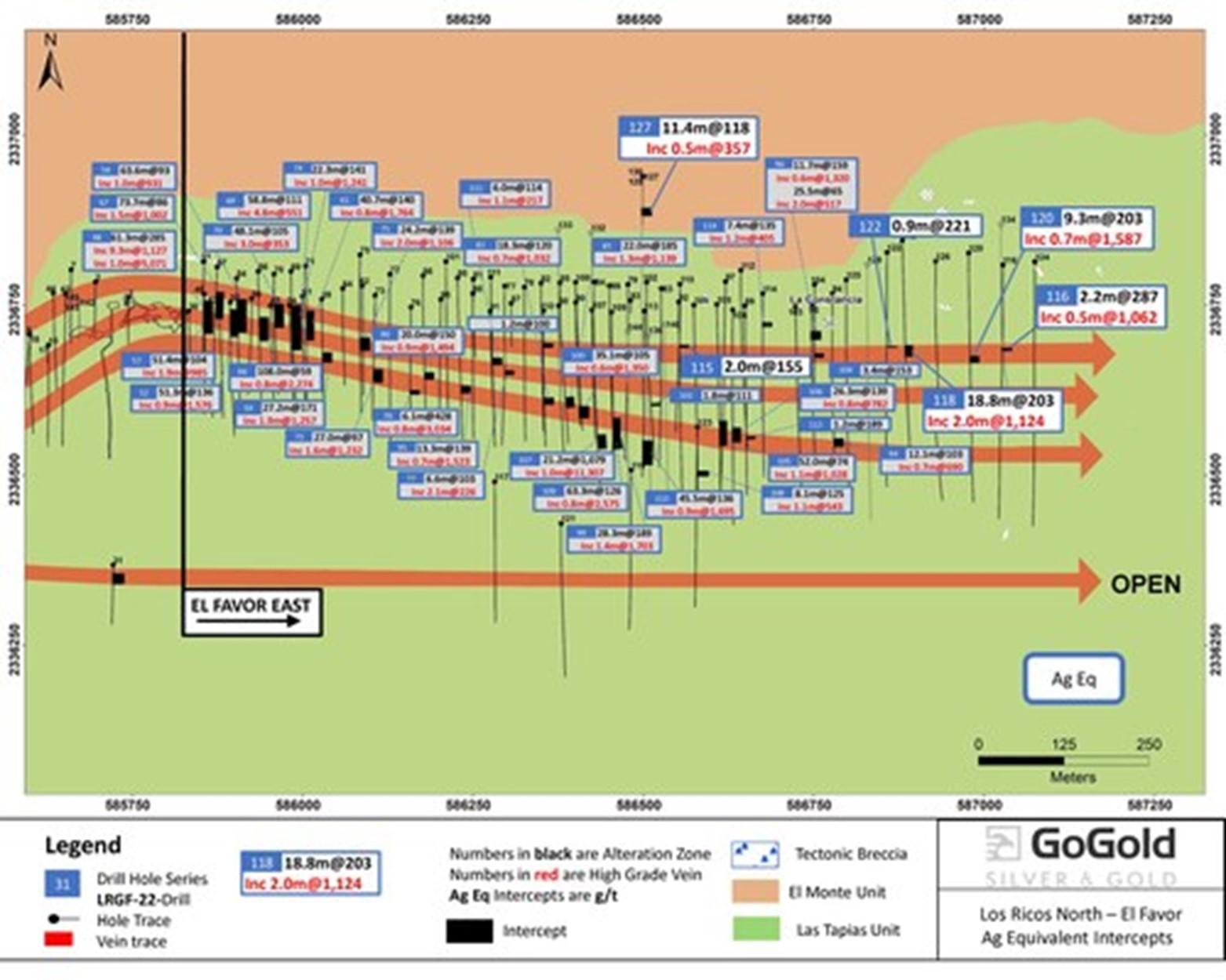 In early 2022, the exploration team began a systematic stepout drilling program to test the eastern strike extension of the El Favor deposit in the area between Discovery Hole 48 and the underground workings at the Constancia Mine. This area is known as the El Favor East zone, and the mapping and drilling program has extended the presence of mineralization 900m to the east of hole 48 (El Favor East zone discovery hole), as shown in Figure 1.  To date, approximately 800m of El Favor East has been drilled showing the strong mineralization.  The drill holes in this release were not included in the initial Mineral Resource Estimate for Los Ricos North released on December 7, 2021, hole LRGF-21-094 was the final drill hole included in that resource.

In September, the company commissioned TMC Exploracion to complete an IP survey using the Pole:Dipole array on the El Favor property. The grid consists of a network of 28 N/S profiles spaced every 100 m from L-2W to L-25E ranging in length from 0.85 to 2.0 km.  The survey outlined several high chargeability anomalies representative of the sulphide mineralization along the El Favor – El Favor East zone.  A geophysical map showing anomalies and drilling targets is included as Figure 2 below. 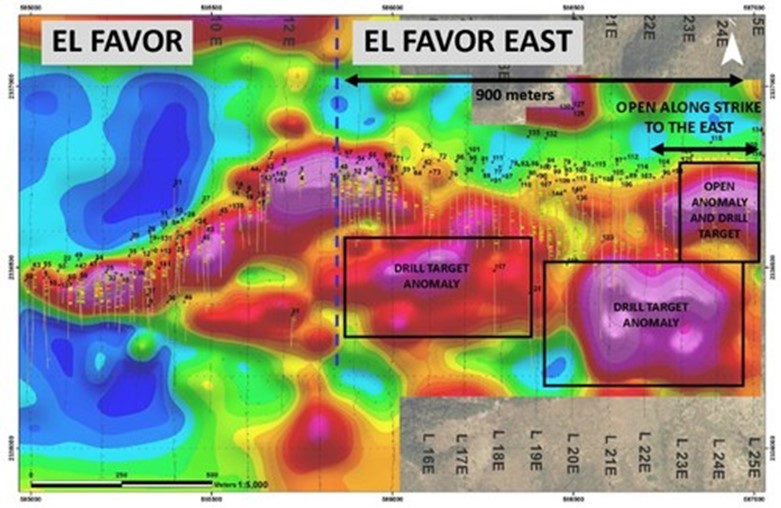 El Favor is located approximately 800 meters along strike to the east of the El Orito deposit.  The combined systems cover approximately 2.9km in mineralized strike length over a 3.7km distance. At El Orito, wide zones of precious and base metal mineralization were cut by drill holes at El Orito at elevations between 600 to 900m.  The drill holes at El Favor have cut primarily silver-gold mineralization with trace to minor amounts of base metals at a higher elevation in the system, between 1,050m to 1,400m, compared to the semi-massive to massive base metal sulphide mineralization seen deeper in the El Orito deposit. 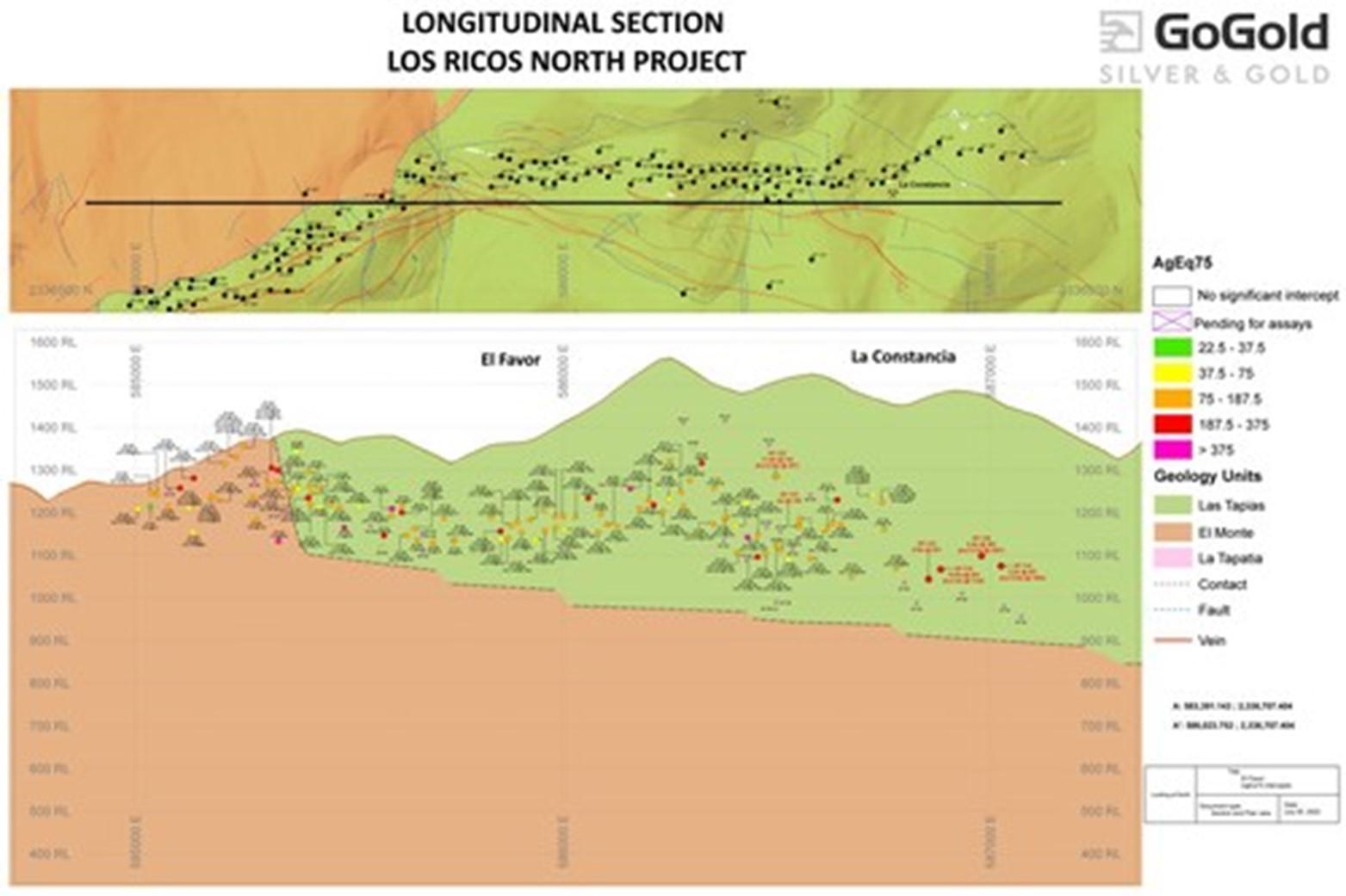