The securities offered will not be registered under the U.S. Securities Act of 1933, as amended, or any state securities laws, and may not be offered or sold in the United States absent registration or an exemption from the registration requirements. This press release shall not constitute an offer to sell or the solicitation of an offer to buy nor shall there be any sale of the securities in any jurisdiction in which such offer, solicitation or sale would be unlawful.

Fremont may pay a finder’s fee of up to 7% of the gross proceeds raised in connection with the Private Placement. Closing of the Private Placement and the payment of any finder’s fees will be subject to the approval of the TSX Venture Exchange. All securities issued pursuant to the private placement will be subject to a four month hold period under Canadian securities laws and the policies of the TSX Venture Exchange, as applicable.

The Gold Bar mine produced 286,354 ounces of gold from 1986 to 19943 and is five kilometres southwest of McEwen’s project. It contains a historic resource of 147,000 ounces @ 2.57 g/t Au called the Millsite deposit1 thought to be a faulted off-set of the former Gold Bar ore body (see Fremont press release dated September 12, 2017) located on the northwest side of the old pit. A qualified person has not done sufficient work to classify the historical estimate as current mineral resources or mineral reserves and Fremont is not treating the resource as current mineral resources or mineral reserves. 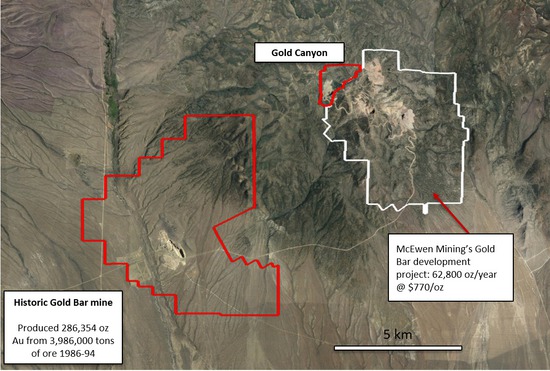 Mineralization at Gold Canyon is controlled by a northeast trending high angle feeder structure. Recent rock chip sampling of this structure from the north east end of the pit returned values of up to 9.15 g/t Au (see Fremont press release dated January 16, 2018). This mineralized zone clearly trends to the north east out of the pit and is most likely the mineralized structure intersected in historical Atlas drill hole #100-45 which returned 60 feet grading 0.112 oz/ton Au (18.3m @ 3.48 g/t Au) within the North Gold Ridge target zone2. Fremont intends to expand this mineralized zone by drilling the initial holes in this area and has identified a number of prospective structural and near-pit mineralized zones at the original Gold Bar mine which will be drilled as well.

1Resources were calculated using a 100 x 100 x 15 ft. blocks using a 0.25 oz/ton (0.775g/t) cutoff grade, and a 100 ft search radius2. The resource categories used by Atlas at the time are not the same as those used by the Canadian Institute of Mining and Metallurgy, but were those used by the company to classify mineability of ore in the mid 1990’s. Atlas Corporation, Gold Bar Review, January 1997
2Ely Gold Royalties fact sheet based on Telesto 2010
3Internal report, Atlas Precious Metals, Mines, Dec 13, 1995, prepared by Pincock, Allen & Holt
4Atlas-Granges Joint Venture, 1996, Year End Report, 17p