Formation Metals to Sell Refinery for US$12 Million

Formation Metals to Sell Refinery for US$12 Million 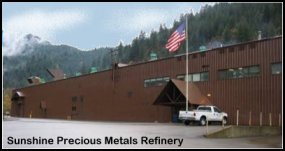 Formation Metals Inc. (TSX:FCO) announced today that it has entered into a share purchase agreement, to sell all of the shares of its indirect wholly-owned subsidiary Formation Metals, U.S.  whose primary asset is the Sunshine Precious Metals Refinery to Silver Opportunity Partners LLC, a wholly owned subsidiary of Sunshine Silver Mines for US$12 million.

The Sale is expected to conclude on or before October 10, 2013. A US$500,000 deposit has been placed in escrow by SSM and is non-refundable in the event that SSM breaches the contract and causes the Sale not to conclude.

Cormark Securities Inc., financial advisor to the board of directors of Formation has provided an opinion to the Board that the consideration to be received under the Sale is fair, from a financial point of view, to Formation’s shareholders.

“We are pleased that we were able to reach an agreement for the sale of the refining operations. The sale of this non-core asset is not expected to have a negative impact on Formation’s flagship cobalt project and will add significant non-dilutive funds to the Company’s treasury,” stated Mari-Ann Green, C.E.O. of Formation Metals Inc. She continued, “The Company can then eliminate all debt and review opportunities to enhance shareholder value.”

The Company’s flagship project, the Idaho Cobalt Project is a fully permitted primary cobalt deposit unique to the Americas that is fundamentally prepared for the commencement of underground development. The decision to process ICP concentrate utilizing a stand-alone autoclave in a separate facility from the existing Refinery was made over a year ago as a part of the ongoing engineering optimization studies for the ICP (see news releases dated May 2, 2012, July 12, 2012, and December 12, 2012). That decision afforded the Company the opportunity to monetize the Refinery at a sale price that represents a significant premium over the previous offer of US$9 million from a prior bidder.

Cobalt prices have outperformed the vast majority of other commodities, rising over 40% since bottoming in December 2012. This type of continued activity in the cobalt markets is expected to warrant renewed attention from prospective financiers for the ICP.

Formation is a well-established mineral exploration and development company that owns 100% of a fully permitted primary cobalt deposit located in Idaho which has been prepared for the commencement of underground development, pending additional mine financing. Formation has additional interests in base, precious metal and uranium projects in Canada, the United States and Mexico. Formation is dedicated to the principles of environmentally sound mining and refining practices, and believes that environmental stewardship and mining can co-exist. The Company trades on the Toronto Stock Exchange under the symbol FCO.