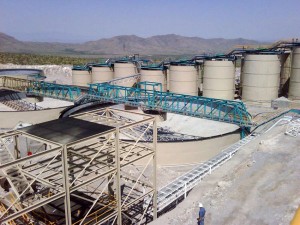 FIRST MAJESTIC SILVER CORP. (TSX:FR)(NYSE:AG)(FRANKFURT:FMV) is pleased to announce that the expansion that commenced at the La Guitarra Silver Mine in November 2012 is now complete. The processing plant’s capacity increased by 40% to 500 tpd from 350 tpd and commercial production is expected to reach 500 tpd during the month of May.

The construction of the new circuit was completed on budget and has been operating since April 24, 2013, without disrupting operations in the old 350 tpd circuit. This new circuit, resulting from the installation of a new ball mill and new flotation cells, is anticipated to produce approximately 1.2 million ounces of silver equivalent annually, representing over one million ounces of pure silver plus a modest amount of gold.

The next planned plant improvements include an enclosed reactor for leaching of the silver-gold concentrates which are currently being produced on site, of which a portion are being transported to the La Parrilla Silver Mine for production into silver dore bars. This new leaching circuit will allow for the concentrates to be transformed into precipitates and then into silver dore bars on site at the La Guitarra Silver Mine, significantly reducing smelting/refining charges as well as reducing transportation costs. Planning is underway for this additional mill upgrade to 1,000 tpd and the permitting is expected to conclude in the coming months. The installation of this reactor is planned to be completed in early 2014 which will further improve the economics of the La Guitarra mine.

Keith Neumeyer, President and CEO of First Majestic, states: “Since the purchase of the La Guitarra mine in July 2012, we’ve been confident of the mine’s upside and have known it would take time for it to reach its full potential. As I’ve said many times; great mines take time, expertise and money to reach their potential. We are adding these elements one step at a time, and will continue to do so, which will result in a continuation of growth at the La Guitarra mine for many years to come.”

First Majestic is a producing silver company focused on silver production in Mexico and is aggressively pursuing its business plan of becoming a senior silver producer through the development of its existing mineral property assets and the pursuit through acquisition of additional mineral assets which contribute to the Company achieving its aggressive corporate growth objectives.