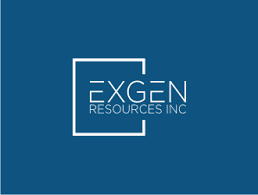 ExGen is pleased to announce encouraging results from the Company’s 2018 drilling programme at the Empire Copper Mine in Idaho, USA (the “Empire Mine”).

Dennis Thomas, Chief Executive Officer, commented, “We are pleased to present the assay results received to date from the 2018 Empire drill programme. The step out drilling portion of the programme is only partially complete, and the results are encouraging. Notable intervals of 12.2 metres of 0.95% copper, 13.7 metres of 0.64% copper and 6.1 metres of 1.09% copper have been reported in previously untested areas. This is of major significance as all the mineralised intercepts are outside of the November 2017 Resource Model reported by Hardrock Consulting. This previously untested ground is still open to the east and at depth, and we are currently targeting follow-up drilling to be completed in the next two months. In addition to these holes, we are drilling possible mineralised extensions on both the north and the south ends of the project and we await the assay results from these holes with interest.

“Our infill drilling programme, which is designed to upgrade the inferred resources to the measured and indicated category, shows robust results and this programme will also be completed in the next two months. All new results will be used to update the resource model in which average grade of the ‘measured and indicated’ resource is 0.52% copper. Our hope is that continued drilling results similar to those reported herein will have a positive effect on the overall grade and tonnage, which will materially enhance the economics of the project.

“The elevated tungsten, gold and silver values associated with the copper intersections, shown in the table below, are worth noting. Along with the historic gold, silver and tungsten assays, the recovery of these potential by-products will be evaluated in more detail.

“We will continue to report new assay results over the next few months as the drilling progresses and the results are received from the ALS Global laboratory in Nevada.

“The current drilling programme remains focused on the open pit oxide resources and does not cover the deeper, higher grade, sulphide potential which the Company is keen to explore.

“We have also acquired the Granite Block of claims, which should provide sufficient space to accommodate any expansion of the existing resource at the southern end of the Empire Mine pit. The current understanding of the historical production from the Granite patented claim provides the possibility of a southern extension to the known Empire resource. The potential for resource expansion in the Granite Block, and in the previously reported Horseshoe Block at the north end of the Empire property, is high and will be drill tested later in the summer as part of the ongoing drilling program.”

Mr. Jason Riley, CEO of ExGen, commented, “We are very pleased with this round of assays. We have intercepted multiple significant intervals of copper at grades that are higher than our current resource. The step out drilling to the East and West has intercepted previously unknown mineralization of significant grade and intervals that could have a positive impact on the resource in terms of both grade and tonnage. We eagerly await the results of follow up drilling on additional possible mineralised extensions on both the north and the south ends of the Empire project.”

Of the planned 12,200 metre drill programme scheduled for completion in 2018, Phoenix has completed a total of 7,116 metres of drilling at Empire. To date this consists of 4,840 metres of reverse circulation (RC) drilling, 1,573 metres of HQ core drilling, and 703 metres of PQ core drilling. Drill samples are being delivered to the ALS Global laboratory in Nevada for assay with a turnaround time of approximately six weeks. The drill hole results received to date from core holes KXD18-1 through KXD18-6 and RC holes KX18-1 through KX18-34 are shown below.

Copper, zinc and silver were determined by the ICP method. Copper and zinc >1%ICP are assayed using four-acid digestion and silver >100ppm by four acid digestion, whereas gold was determined by a 30gm fire assay followed by atomic absorption. The QP for this news release notes that Phoenix inserted industry standards, blanks and duplicates into their sample stream, as standard QA/QC protocol.

ExGen, formerly Boxxer Gold Corp, is a project accelerator that seeks to fund exploration and development of our projects through joint ventures and partnership agreements. This approach significantly reduces the technical and financial risks for ExGen, while maintaining the upside exposure to new discoveries and potential cash flow. The company intends to build a diverse portfolio of projects across exploration stages and various commodity groups. ExGen currently has 6 projects in Canada and the US.