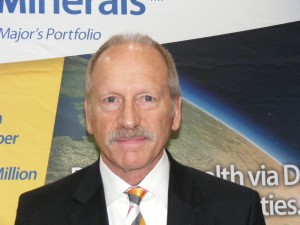 Overview of Commercial Terms. The Trab-23 agreement provides for an upfront transfer of two EMX Licenses to Tumad, conditioned upon the approval by the General Directorate of Mining Affairs of the Ministry of Energy and Natural Resources (MIGEM), on or before February 1, 2014, to combine the two Licenses into a single exploitation license (the “Combined License”). Tumad has the option to retain ownership of the Combined License upon making certain staged payments and performing certain work obligations as summarized below (all dollar amounts in USD):

—  Payment of $15,000 upon approval by MIGEM of the license combination and

transfer of the Combined License to Tumad;

—  Drilling of 1,500 meters by the first anniversary of the date of

transfer of the Combined License (the “Transfer Date”) to Tumad;

—  Drilling of an additional 2,000 meters by the second anniversary of the

—  Drilling of an additional 2,500 meters by third anniversary of the

Upon payment and performance of the Option Consideration, Tumad may elect to retain the Combined License, and after such election, Tumad shall pay annual minimum royalties of $100,000 commencing upon the first anniversary of exercising the option. Upon production from the Licenses, Tumad will pay EMX Turkey a 3% net smelter return royalty from production (the “NSR Royalty”). The annual minimum royalties will be credited to 80% of the NSR Royalty then payable.

Trab-23 Property Background. EMX’s Trab-23 project is located in Turkey’s eastern Pontides metallogenic belt, and hosts both porphyry gold (copper-molybdenum) mineralization and epithermal quartz-barite-gold veins. Rocks at higher elevations are dominated by epithermal styles of alteration and mineralization, while porphyry-style alteration and mineralization is exposed at lower elevations as observed in stream bottoms and from drilling. Elevated gold-in-soil anomalies are coincident with a magnetic high in the center of property.

Other EMX News. The Company also announces that Mr. Paul Zink has left EMX to pursue other interests. Mr. Zink was instrumental in EMX’s 2012 merger with Bullion Monarch Mining Inc. (“Bullion”), which included paying 1% gross smelter return (GSR) royalties on the Carlin Trend in Nevada from the Leeville, Four Corners, and other nearby North Area mines operated by Newmont Mining Corporation (see Company news release dated August 20, 2012). The Company extends a sincere gratitude to Mr. Zink for helping develop its growing royalty property portfolio, and wishes him all the best in his future endeavors.

Comments on Sampling, Assaying, and QA/QC. EMX’s geochemical samples were collected in accordance with accepted industry standards. The samples were submitted to ALS Chemex laboratories in Izmir, Turkey (ISO 9001:2000) and Vancouver, Canada (ISO 9001:2000 and 17025:2005 accredited) for sample preparation and analysis. Gold was analyzed by fire assay with an AAS finish, and copper underwent aqua regia digestion and analysis with ICP/AES techniques. As standard procedure, the Company conducts routine QA/QC analysis on all assay results, including the systematic utilization of certified reference materials, blanks, and field duplicates. Copper equivalent calculated as Cu % + (Au g/t x 0.65) with metallurgical recoveries and net smelter returns assumed to be equal.

Mr. Michael P. Sheehan, CPG, a Qualified Person as defined by National Instrument 43-101 and employee of the Company, has reviewed, verified and approved the disclosure of the technical information contained in this news release.