Drilling at Las Conchitas Extends Near Surface, High-Grade Gold Mineralization, Highlighted by Intercepts of 32.73 G/t Gold Over 3.1 Meters and 30.61 G/t Gold Over 3.4 Meters at the Bayacun Zone

Drilling at Las Conchitas Extends Near Surface, High-Grade Gold Mineralization, Highlighted by Intercepts of 32.73 G/t Gold Over 3.1 Meters and 30.61 G/t Gold Over 3.4 Meters at the Bayacun Zone

The goal of the 2020 drill program at Las Conchitas is to focus on the most promising zones of near surface, shallow dipping, high-grade gold mineralization in order to delineate a maiden resource. Since 2019, the Company has completed 134 shallow drill holes totaling 10,644.20 meters within the Las Conchitas area (see the attached map).

The highest grade intervals reported in this press release come from drill holes LC20-165 and LC20-162.  Both holes are located in the Bayacun Zone, which was discovered by Mako in 2019 (see press release dated September 10, 2019), and is located towards the southern end of the Las Conchitas area, approximately 4 kilometers south of the processing plant currently under construction at San Albino.

Akiba Leisman, Chief Executive Officer of Mako states, “these results at the Bayacun Zone of Las Conchitas further support our thesis that the San Albino deposit is part of a larger high-grade, near surface gold system on the Company’s 150 square kilometer land package. Additionally, we have only begun to understand the geological controls at Las Conchitas. As we continue drilling, and as we gain invaluable information from mining the San Albino deposit to the north, we expect to advance Las Conchitas to the point where it can become our second area of mining over the next couple of years.”

Bayacun is an historic underground mine, which was last operated in the late 1800’s. While no production data is available, the Company had previously sampled what appeared to be a historic stockpile near a tunnel in 2012 that returned 34.90 g/t Au and 42.4 g/t Ag (see press release dated March 21, 2012).  Direct shipping ore was sent to the nearby, historic El Golfo mill for processing. The mill, along with the historic El Golfo mine, are located within Mako’s El Jicaro concession, an area which the Company plans to drill after the San Albino gold project is commissioned.

The Bayacun Zone appears to be analogous to San Albino in terms of continuity, geochemistry and predictability. It is open for at least 50 m to the southwest until Candelaria creek, which is interpreted to be a fault with unknown offset. The zone is also open down-dip and to the northeast.  Importantly, recent down-dip drilling at the Bayacun Zone has returned holes containing visible gold. Assays on these holes are expected back later this month.

Furthermore, drill hole LC20-148 returned a mineralized interval of 20.94 g/t Au and 6.13 g/t Ag over 2.3 m, 73 m from surface within the El Limon Zone. This hole was designed to test the down-dip extension of El Limon and results have demonstrated that the high-grade gold mineralization is still open to the southwest.

Las Conchitas is an underexplored area along a gold-rich corridor with multiple historic underground workings. All of the underground workings are caved-in and not accessible. Outcrops in the area are sparse to nonexistent, making it challenging to resolve the structural complexities of the area and to determine the local controls on gold mineralization. The Company is eager to expose the gold bearing veins at San Albino to gain a better understanding of the gold emplacement and to apply this knowledge at Las Conchitas.

Drill core was continuously sampled from inception to termination of the drill hole. Sample intervals were typically one meter. Drill core diameter was HQ (6.35 centimeters). Geologic and geotechnical data was captured into a digital database, core was photographed, then one-half split of the core was collected for analysis and one-half was retained in the core library. Samples were kept in a secured logging and storage facility until such time that they were delivered to the Managua facilities of Bureau Veritas and pulps were sent to the Bureau Veritas laboratory in Vancouver for analysis. Gold was analyzed by standard fire assay fusion, 30 gram aliquot, AAS finish. Samples returning over 10.0 g/t gold are analyzed utilizing standard Fire Assay-Gravimetric method. Due to the presence of coarse gold, the Company has used 500-gram metallic screened gold assays for analyzing samples from mineralized veins and samples immediately above and below drilled veins. This method, which analyzes a larger sample, can be more precise in high-grade vein systems containing coarse gold. All reported drill results in this press release using the metallic screening method are indicated. The Company follows industry standards in its QA&QC procedures. Control samples consisting of duplicates, standards, and blanks were inserted into the sample stream at a ratio of 1 control sample per every 10 samples. Analytical results of control samples confirmed reliability of the assay data. No top cut has been applied to the reported assay results. 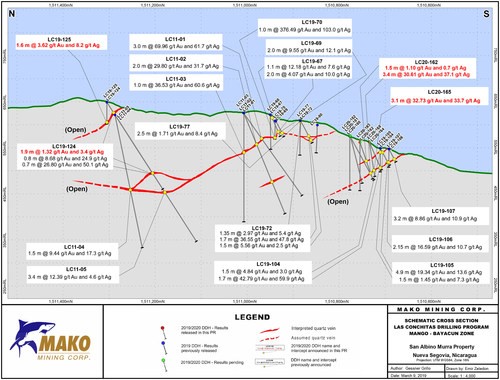 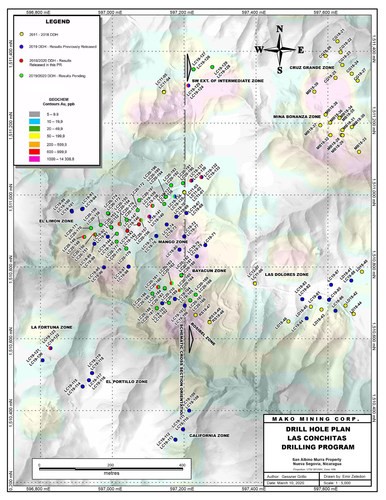