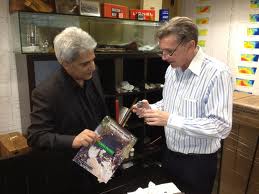 GREAT ATLANTIC RESOURCES CORP. (TSXV.GR) announces that the West Gore drill program announced November 26 is now under way.  The program  will test high grade gold and antimony targets intersected in drill hole programs from the 1980’s and may include some exploratory holes in several untested targets on the property.

Through this drilling, Great Atlantic plans to reconfirm the work that was carried out by Dominion Explorers during the period between 1984 and 1987. They had conducted  ground magnetometer, IP and VLF surveys followed by two episodes of diamond drilling in 1985 (19 holes totalling 2115 meters) and in 1987 (6 holes totalling 998 meters). Below is a cross section of the structure being re-tested with confirmation drilling.

Patrick Forseille, P. Geo., a Qualified Person as defined by NI 43-101 is responsible for the technical information contained in this release.

The Company also announces that it has arranged a non-brokered private placement consisting of up to 3,000,000 units at a price of $0.05 per unit in the capital stock of the Company.  Each unit consists of one flow through common share and one common share purchase warrant.  Each share purchase warrant will entitle the holder thereof to purchase one additional share of the Company at a price of $0.05 per share for a period of sixty months from the closing date of the private placement. Closing of this placement is conditional upon approval of the TSX Venture Exchange.

The company also announces that it has granted options to purchase 2,000,000 shares to certain officers, consultants and directors of the company. The options shall be exercisable at a price of $00.05 cents per share and shall have a term of two years.