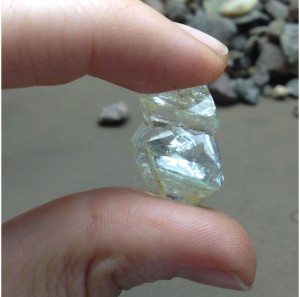 Diamcor Mining Inc. (TSX-V.DMI) (OTCQX-DMIFF) announces it has arranged a brokered private placement financing  of 2,142,858 units at a price of $1.40 per Unit for gross proceeds of $3,000,001.20.  Each Unit consists of one common share of the Company and one-half of one common share purchase warrant.  Each whole Warrant has a 3 year term and entitles the holder to purchase one Share at an exercise price of $1.80.

The Company engaged Roth Capital Partners as the lead agent and Euro Pacific Canada Inc. for the Offering.  The Agents will receive a cash fee equal to 6% of the gross proceeds raised from the Offering and that number of Agents’ warrants equal to 6% of the number of Units sold pursuant to the Offering.  Each Agents’ warrant has a 3 year term and entitles the holder to purchase one Share at an exercise price of $1.80. Securities issued pursuant to the Offering will be subject to a hold period of four months plus one day following the date of issuance.  Participants in the Offering were largely institutional investment firms, and the Offering is expected to close on or before March 7, 2014, subject to regulatory approval and/or approval of the TSX Venture Exchange along with completion of all definitive documentation and filings, as required.  Proceeds from the Offering will be used to support the advancement of the Company’s Krone-Endora at Venetia Project, and for general and administrative purposes.

Diamcor Mining Inc. is a fully reporting publically traded junior diamond mining company which is listed on the TSX Venture Exchange under the symbol V.DMI, and on the OTC QX International under the symbol DMIFF.  The Company has a well-established prior operational and production history in South Africa, extensive prior experience supplying rough diamonds to the world market, and has established a long-term strategic alliance with world famous Tiffany & Co.  Rather than exposing itself to the high risks and costs associated with traditional exploration, the Company’s focus is on the identification, acquisition, and operation of unique diamond projects with near-term production potential such as the Krone-Endora at Venetia Project.

About the Tiffany & Co. Alliance

As announced on March 29, 2011, the Company has established a long-term strategic alliance and first right of refusal with Tiffany & Co. Canada, a subsidiary of world famous New York based Tiffany & Co., to purchase up to 100% of the future production of rough diamonds from the Krone-Endora at Venetia Project at then current prices to be determined by the parties on an ongoing basis.  In conjunction with this first right of refusal, Tiffany & Co. Canada also provided the Company with substantial financing to advance the Project as quickly as possible. Tiffany & Co. is a publically traded company which is listed on the New York Stock Exchange under the symbol TIF.  Founded in 1837, the Tiffany name is now globally recognised as one of the premier luxury jewellery and specialty retailers in the world. Through Tiffany & Co. and various other subsidiaries, the company is engaged in product design, manufacturing, and retailing activities on a global basis.  As of December 31, 2013, Tiffany & Co. operated 286 stores and boutiques in the Americas, Japan, Asia-Pacific, Europe and the United Arab Emirates, and also engages in direct selling through internet, catalog and business gift operations. For additional information on Tiffany & Co., please visit their website at www.tiffany.com.

In February 2011, Diamcor acquired the Krone-Endora at Venetia Project from De Beers Consolidated Mines Limited, consisting of the prospecting rights over the farms Krone 104 and Endora 66, which represent a combined surface area of approximately 5,888 hectares directly adjacent to De Beers’ flagship Venetia Diamond Mine in South Africa. De Beers previously completed various exploration efforts on initial areas of interest comprised of approximately 307 hectares, a summary of which was reported in an initial Independent NI 43-101 Technical Report filed by the Company on July 30, 2009. The deposits which occur on the properties of Krone and Endora have been identified as a higher-grade “Alluvial” basal deposit which is covered by a lower-grade upper “Eluvial” deposit. The deposits are proposed to be the result of the direct-shift (in respect to the “Eluvial” deposit) and erosion (in respect to the “Alluvial” deposit) of material from the higher grounds of the adjacent Venetia Kimberlite areas. The deposits on Krone-Endora occur in two layers with an average total depth of less than 15.0 metres from surface to bedrock, allowing for a very low-cost mining operation to be employed with the potential for near-term diamond production from a known high-quality source.  Krone-Endora also benefits from the significant development of infrastructure and services already in place due to its location directly adjacent to the Venetia Mine.  Since acquiring Krone-Endora the Company has completed the construction and installation of extensive infrastructure at the Project, along with the installation of a purpose built modular processing plant, and extensive quarrying and in-field screening operations.  Commissioning of the processing plant is now complete, and the Company’s current efforts are designed to be a continuation of the ongoing advancement of the Project, and as part of the Company’s preparations for an ultimate decision to move from bulk sampling and trial mining exercises to full scale mining operations.