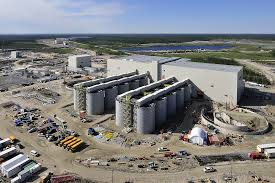 Detour Gold Corporation (TSX:DGC) today announced that it has completed its previously announced public offering of 18,653,000 common shares pursuant to its short form prospectus dated February 28, 2014, raising gross proceeds of C$172,540,250. The underwriters, led by BMO Capital Markets and RBC Capital Markets, purchased all of the 2,433,000 Common Shares available for issuance pursuant to the exercise of their over-allotment option, in addition to the 16,220,000 Common Shares that the underwriters initially agreed to purchase. As of today’s date and factoring the Common Shares issued pursuant to the closing of the Offering, Detour Gold has 156,806,791 Common Shares issued and outstanding.

The Company intends to use up to approximately half of the net proceeds of the Offering to repay debt and the remainder for sustaining capital requirements, debt servicing costs and for general corporate purposes and to improve working capital balances.

The securities offered have not been registered under the U.S. Securities Act of 1933, as amended, and may not be offered or sold in the United States absent registration or any applicable exemption from the registration requirements. This press release does not constitute an offer to sell or the solicitation of an offer to buy nor will there be any sale of the securities in any state in which such offer, solicitation or sale would be unlawful.

Detour Gold is an emerging mid-tier gold producer in Canada. The Company is ramping up its 100% owned Detour Lake mine to a long life, large scale open pit operation. The Detour Lake mine has proven and probable reserves of 15.5 million ounces of gold.