Denis Cimon Receives the 2013 Mineral Processor of the Year Award

Denis Cimon Receives the 2013 Mineral Processor of the Year Award 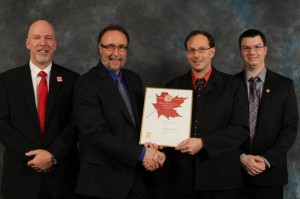 Osisko Mining Corporation (TSX:OSK)(FRANKFURT:EWX) announce that Denis Cimon, Vice-President, Technical Services, has been awarded the 2013 Mineral Processor of the Year Award, by the Canadian Mineral Processors Society (“CMP”), one of the branches of the Canadian Institute of Mining, Metallurgy and Petroleum.

Each year, the CMP emphasizes the remarkable achievements of one of its members having risen to a major challenge in the field of mineral processing. Mr. Cimon was presented this award at the end of January during a conference uniting major industry contributors, for his leading role in the design, development, commissioning and management of the largest gold processing plant in production in Canada-the Canadian Malartic mine. In addition to his technical skills, the award also highlights his leadership as General Manager of Canadian Malartic, which is located in an urban context where social acceptance is essential.

Denis Cimon holds a Bachelor of Mining Engineering, a Masters in Ore Processing from Laval University, and has over 25 years experience in the mining industry. Prior to joining Osisko-in September 2007 as Manager of Mineral Processing, and in 2009, as General Manager of the Canadian Malartic mine and since January 2013, Vice President of Technical Services-Mr. Cimon held several functions in Quebec, Canada and abroad, in areas ranging from the design to the operation of large gold mining facilities.

Luc Lessard, Osisko’s Senior Vice-President and Chief Operating Officer commented, “We are proud to see one of our own being recognized for their hard work and expertise. Awards like these truly cement the fact that we have been successful in establishing a solid operations team. We congratulate and thank Denis for his continued commitment and hard work. His contribution will be invaluable in the continued growth of Osisko.”