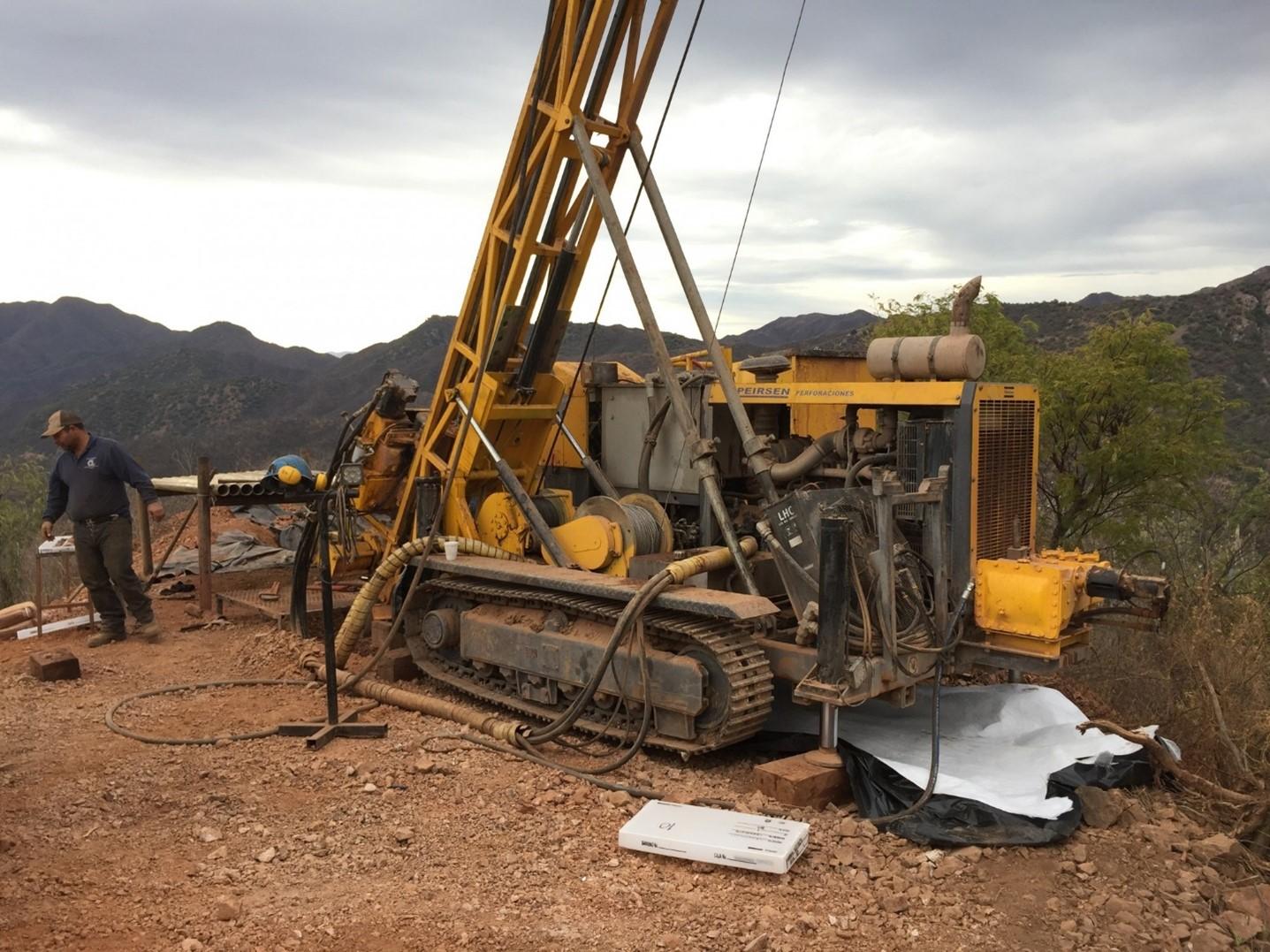 Although the stockmarkets are under increasing pressure by sky high inflation, commodity shortages, decreasing economic demand and a desperate Federal Reserve that is looking to raise interest rates at record speeds, Aztec Minerals Corp. (AZT: TSX-V, OTCQB: AZZTF) keeps drilling diligently at their majority owned and operated (65/35 JV with Kootenay Silver) Cervantes gold project in Sonora, Mexico. Earlier oxidized intercepts of 167.2m @ 1.0g/t Au, 136.8m @ 1.49g/t Au 138.3m @ 0.58g/t Au, 88.4m @ 1.1g/t Au and 152.4m @ 0.87g/t Au are already solidifying the prospect of a potential 1Moz Au heap leachable resource in my view at the California Zone, but a new 350m step-out hole to the north also hit some gold, indicating there could be a new mineralized envelope nearby.

As the 2021-2022 Phase 2 RC drill program aimed at the Cervantes Project has been completed in March for a total of 26 holes with 4,649m drilled, the company reported assays of another 4 drill holes, with 4 more to go. Most of the drilling is focused on the California Zone, but other targets are California North, Jasper and Purisima East. The latest highlights are:

I was pleased to see more mineralization near surface in substantial intercepts to the east at the California Zone in holes 015 and 016, but the step-out hole 017 seemed to indicate there is gold present 350m away from the current envelope, which is encouraging. 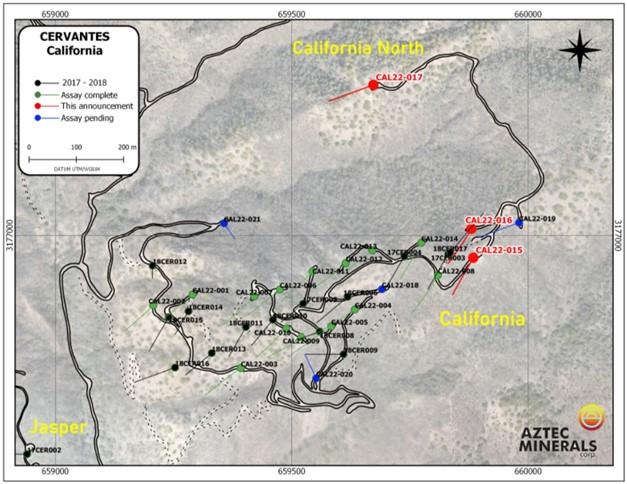 As the mineralization at the California Zone seems to be confined to the higher parts of a ridge, it might be the case that, as hole 017 is located on another, parallel ridge in a target zone called California North, there could be another mineralized envelope of some size. It could also represent a continuous mineralized area stretching from the California ridge to the California Zone ridge. In that last scenario lots of tonnage could be added in theory. CEO Simon Dyakowski had this to add when quizzed about expectations of these two scenarios, although early days of course:”The presence of gold mineralization in Hole17 at California North demonstrates the openness of the larger California zone and provides justification to continue stepping out from the main California zone Northern Fence. We are in the planning stages of a follow up program and expect to plan addition drilling in another parallel fence, as well as around the California North ridge”

It would be interesting to see what the assays will return for hole 021, as this can be viewed as an extension of the ridge hosting hole 017. If successful, this could warrant another set of infill exploration holes between 017 and 021 in a follow-up program. As a reminder, Aztec Minerals is testing the California North target, as earlier surveys indicated great potential: 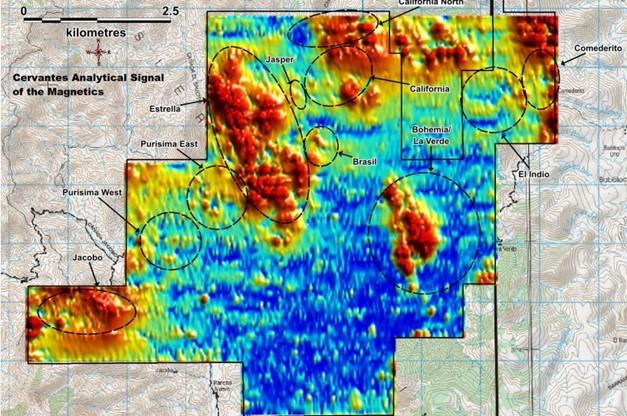 The California North target seems sizeable for magnetics, but so does Estrella. Asked if Aztec Minerals has any plans to go after Estrella or other targets soon, CEO Dyakowski answered: .”We are currently re-mapping the Estrella ridge with the goal of generating drill targets”.

The gold intercept at the hole drilled at Jasper wasn’t long at just 9.1m @ 0.33 g/t Au, but the company geologists noticed widespread visible copper oxides/sulfides over 150m, so this hole could indicate the deeper porphyry potential Aztec Minerals is chasing. Although I must say Jasper isn’t close to the IP chargeability anomalies already detected (Jasper target in blue rectangle):

The Jasper target location relative to the California targets can be seen in more detail on this map: 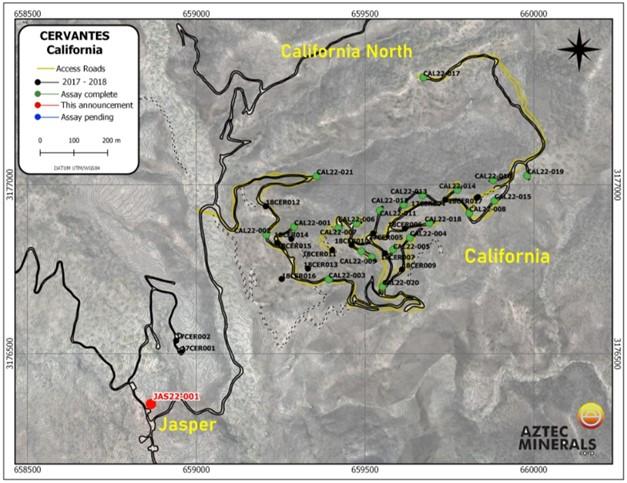 According to CEO Dyakowski, final assays for hole JAS22-001 and the remaining holes are expected soon.

As it is too early to estimate anything on Jasper or California North mineralization, but no problem to include the results of holes 015 and 016, a slightly longer mineralized hypothetical envelope of 850x275x85x2.7=53.65Mt can be estimated now, and using an estimated average grade of 0.6g/t Au we would arrive at a hypothetical 1.03koz Au, which would pass the very important 1Moz Au threshold as you probably know.

As a reminder, management is contemplating a 5,000m follow up drill program at Cervantes in the second quarter, not only will the near surface heap leachable mineralization be explored, but a stronger diamond drill rig will finally be utilized to drill at depth for large porphyry targets, indicated by a large IP chargeability anomaly. Aztec is also carrying out channel sampling and geologic mapping of the new drill roads at the moment at California, California Norte and Jasper, and is expanding surface sampling and mapping on the property in general, in order to continue the 2021 phase 1 surface program.

The exciting thing here is of course, that the Cervantes oxides aren’t the only thing Aztec is looking to explore, as it is also planning a drill program for their Tombstone gold-silver oxide project (subject to a 75/25 JV with Aztec as the operator) in Arizona for the summer, also enabling them to go after large porphyry/CRD potential at depth at both projects.  Since the share price of Aztec Minerals is holding up pretty nicely despite the devastating broad market sell-offs, I would assume the company is advancing their plans to do a raise soon, in order to properly budget their planned drill programs for California and Tombstone.

As holes 15 and 16 returned decent intercepts and extended the California Zone with another 75m or so, my estimates indicate that Aztec Minerals could very well be looking at 1Moz Au at the moment, with the vast majority of it heap leachable oxides. The step-out hole 17 could indicate a second mineralized ridge parallel to the California Zone, or an indication of a much larger, oxidized cap. More drilling is needed to shine light on the possibilities here, but the company is already making plans to approach this in the most efficient way possible. And as I keep mentioning: keep in mind Cervantes isn’t the only project, and both Cervantes and Tombstone have near surface oxides plus deep porphyry/CRD potential.

I hope you will find this article interesting and useful, and will have further interest in my upcoming articles on mining. To never miss a thing, please subscribe to my free newsletter at www.criticalinvestor.eu, in order to get an email notice of my new articles soon after they are published.

The author is not a registered investment advisor, and currently has a position in this stock. Aztec Minerals is a sponsoring company. All facts are to be checked by the reader. For more information go to www.aztecminerals.com and read the company’s profile and official documents on www.sedar.com, also for important risk disclosures. This article is provided for information purposes only, and is not intended to be investment advice of any kind, and all readers are encouraged to do their own due diligence, and talk to their own licensed investment advisors prior to making any investment decisions. 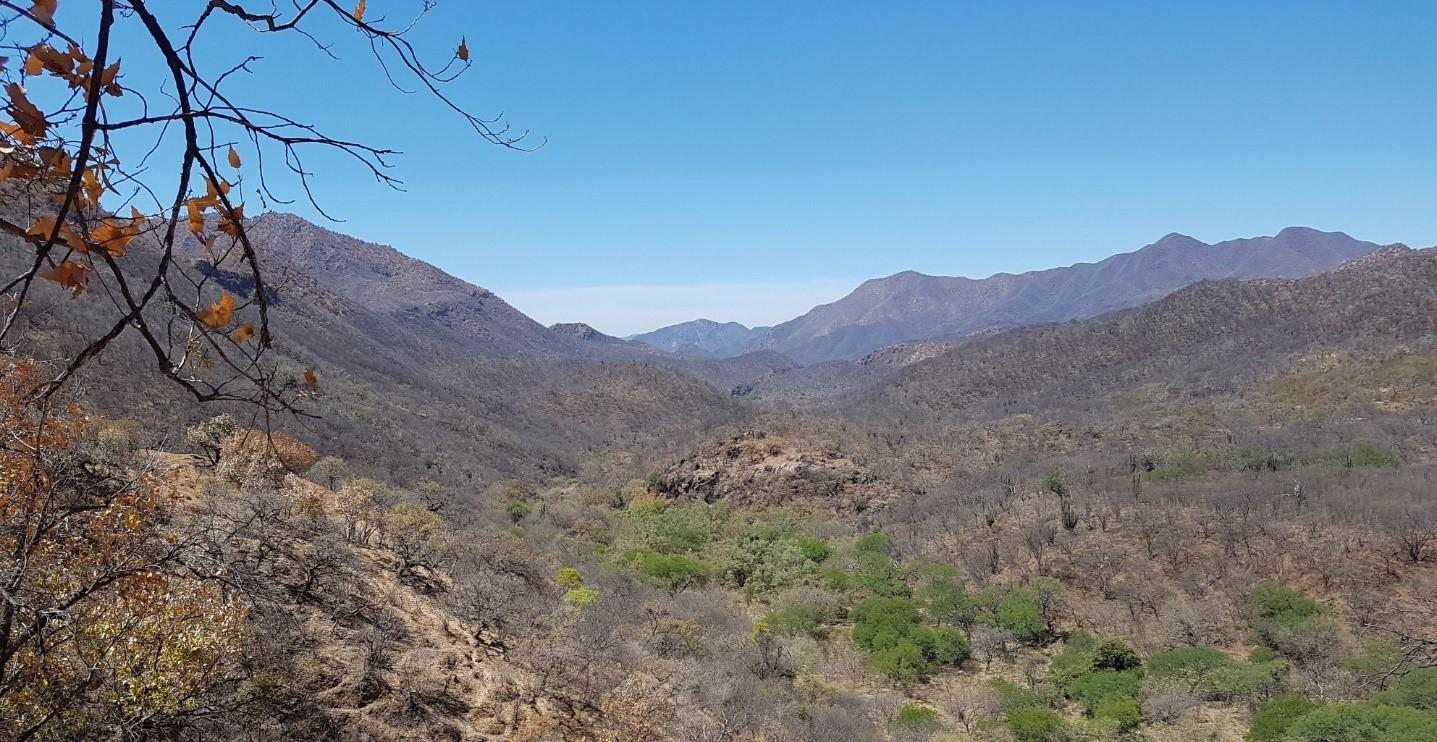