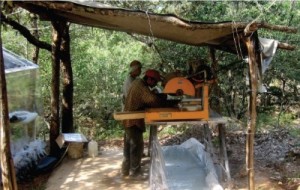 Cream Minerals Ltd. (TSX VENTURE:CMA)(OTCQB:CRMXF)(FRANKFURT:DFL) announces that Cream has agreed not to proceed with the sale of the Company’s Nuevo Milenio Silver-Gold Property as previously announced on July 22, 2013. The Company’s Board proposes a corporate reorganization consisting of the following:

The Company has called an annual general and special shareholders meeting to be held on September 27, 2013 to, among other things, restructure the Board. The record date to determine shareholders entitled to receive notice of and vote at the Shareholders’ Meeting has been set as August 29, 2013.

Frank Lang’s subscription of up to 6,000,000 Units, together with the common shares of the Company that he currently holds, would result in Mr. Lang holding more than 20% of the post-consolidated outstanding common shares of the Company. In accordance with the TSX-V’s policies, this will constitute a creation of a new “Control Person”, and will require the approval of the majority of the disinterested shareholders of the Company. Accordingly, at the Shareholders’ Meeting, the disinterested shareholders of Cream will also be asked to approve Mr. Lang’s participation of up to 6,000,000 Units in the Private Placement.

Benjamin Ainsworth brings his extensive experience in the mining industry to Cream. He is a registered professional geological engineer in British Columbia and Saskatchewan. Mr. Ainsworth earned an honours degree in geology from Oxford University in 1962. In 1965, he joined Placer Development, Vancouver, after working in base metal exploration in Ireland and completing service as a Development Geologist with the Ghana Geological Survey. After over 20 years of service with Placer in Canadian and international projects, he formed a mineral exploration consultancy in 1987 and continues to provide consulting services to participants in the mining industry. Mr. Ainsworth is the CEO and a director of Alpha Minerals Inc. (TSX VENTURE:AMW), and the President and a director of Canyon Copper Corp. (TSX VENTURE:CNC).

Darryl Drummond is a Ph.D. and professional geological engineer with over 40 years of experience in the mining industry. He has been a director of a number of publicly-listed mineral resource companies and is currently a director of Gold Port Resources Ltd. (TSX VENTURE:GPO). He graduated from the University of British Columbia with a B.A.Sc. in Geological Engineering in 1959 and with an M.A.Sc in 1961. He obtained his Doctorate degree in 1966 from the University of California at Berkeley. As an undergraduate and graduate, he worked with Kennco Explorations (Western) Ltd. during the period of 1958 to 1961. He has been associated with the Placer Development Group of Companies since 1963, first with Craigmont Mines Ltd, then Endako Mines and Gibraltar Mines. Since 1981, Dr. Drummond has been a consulting professional engineer, concentrating on all aspects of mineral deposit evaluation covering precious metal, base metal, and industrial mineral types in such countries as Argentina, Canada, Chile, China, Costa Rica, Ecuador, Guyana, Mexico, Philippines, USA and Venezuela. He is a member of the Society of Economic Geology and a member of the Geology Section of the Canadian Institute of Mining and Metallurgy.

Ronald Lang, a director and proposed new CEO and President, states, “With the proposed financing and corporate reorganization, the Company will continue to advance mining exploration and development of its silver properties in Mexico and North America with the goal of optimizing shareholder value. On behalf of the Board of Directors, we thank Michael O’Connor for his invaluable service to the Company over the years. His dedication to Cream and his tireless efforts on behalf of the Company during these turbulent economic times has positioned Cream well in the future to meet the challenges that lie ahead. On behalf of Cream, I thank Christopher Hebb, Robin Merrifield, Gerald Feldman and Dwayne Melrose for their service as directors over the years. We wish them all the very best in their future endeavours.”

By virtue of holding more than 10% of the issued and outstanding common shares of the Company, Frank Lang is a “related party” to the Company and his proposed participation in the Private Placement is considered to be a “related party transaction” within the meaning of applicable securities laws. Mr. Lang’s proposed participation in the Private Placement will be exempt from the formal valuation requirement of Multilateral Instrument 61-101 – Protection of Minority Securityholders in Special Transactions as Cream is not listed on certain specified stock exchang