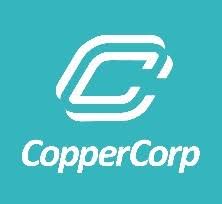 Stephen Swatton, President and CEO of CopperCorp, stated, “The Company is very encouraged by these first drill assay results received from the Stellar Zone at Alpine which is the first exploration drilling to be conducted in the area in 14 years. The results are consistent with the historical drilling and, importantly, confirm continuity of mineralization between historical holes. Mineralization at the Stellar Zone is open along strike and at depth and results from recent geophysical and surface geochemical work has confirmed potential for a large-scale Iron-Oxide-Copper-Gold (IOCG) system at Alpine which the Company plans to continue testing as recently announced with the Alpine Phase 1 drilling program being expanded to 10,000m. The results further highlight the prospectivity of the Arthur Metamorphic Complex for IOCG style mineralization over which the Company has a dominant land holding.”

At the time of reporting, the Company has completed drilling of 11 diamond core holes for a total of 3,925m at the Alpine Stellar Zone, with a 12th hole in progress. The drill program comprises confirmation and infill holes designed to confirm historical copper grades, test continuity of mineralization, and provide geological and structural context to the mineralization.

Drilling to date has intersected up to three zones of mineralization at the Stellar Zone and has confirmed a steep southeast to east dipping trend of the mineralization.

About the Alpine Prospect

The Alpine Prospect was discovered by CRA Exploration in the early 1980’s after following up an airborne magnetic survey with gridding, ground magnetics, and soil geochemistry followed by two diamond drill holes in 1985. Stellar Resources drilled a further 19 holes between 2006 and 2008. The historical, wide-spaced drilling intersected significant IOCG-style copper mineralization, with significant intercepts including (See Table 4):

Mineralization at Alpine is hosted in intensely deformed and metamorphosed amphibolites, mafic and pelitic schists, graphitic phyllites and carbonates belonging to the Bowry Formation of the Arthur Metamorphic Complex. Copper mineralization is associated with up to three sub-parallel magnetite-hematite-sulphide lenses in strongly silica-siderite altered chlorite schists (see examples in Figures 7 and 8). Mineralization consists mainly of chalcopyrite with lesser covellite and bornite. Additional chalcopyrite-pyrite breccia mineralization is hosted in silica-siderite altered and veined quartzites and schists adjacent to the ironstone lenses. Anomalous levels of cobalt is associated with the copper mineralization, typically averaging 200 to 300ppm Co and locally reaching up to 0.1% Co over short intervals.

The mineralization strikes east-northeast and dips steeply to the southeast, forming an interpreted fault-bound boudinage within the highly deformed schists of over 600m in strike length. Drilling completed to date indicates that the thickest part of the Stellar mineralized zone is over 100m in width, thinning to the west and thickening towards an interpreted faulted fold hinge in the east. The deposit remains open down dip and along strike to the west.

The drilling program at the Stellar Zone is ongoing with assays from a further 7 drill holes awaited.  As previously announced1, the Company plans to expand the diamond drilling program from 4,200m to 10,000m. The expanded drill program will be focused on vectoring towards potential zones of thicker and higher-grade mineralization in the Stellar Zone, testing the Stellar Zone at depth, and step-out drilling to test high-priority targets at Alpine West and Alpine North. Planning and permitting for the Alpine West and Alpine North exploration drill programs is underway. The Company currently has one drill at Alpine and plans to source another to expedite the planned drilling. Further infill and extension gridding and soil sampling programs are also planned.

The AMC Project covers a total of 1,066 km2 along approximately 100 km of strike length and establishes CopperCorp as the dominant owner of prospective ground in the district. The rocks are Neoproterozoic-Cambrian age and comprise a regional-scale metamorphic structural deformation zone that is host to widespread magnetite-sulphide-silicate alteration and mineralization indicative of a large Iron Oxide Copper Gold (IOCG)-style system and includes the Savage River 498 Mt @ 46% DTR magnetite mine (owned by Grange Resources Limited)3 and CopperCorp’s Alpine copper prospect.

The Alpine Prospect is located 30 km northwest of the local mining hub of Zeehan and within 5 km of two large-scale operating wind and hydro-electric renewable energy plants.

Full information on historical exploration activities and results at the Alpine Prospect and AMC Project are included in the Technical Report (NI 43-101) dated 18 April 20212.

CopperCorp’s diamond core drill holes are drilled at HQ and NQ core diameters using triple tube to maximize recovery. Core recovery is generally good in mineralized zones (95-100%) with poorer recoveries associated with brittle faulting on zone margins. Sample collection is supervised by CopperCorp geological staff. Mineralized zones are marked up for sampling by an experienced geologist. Half core is split by diamond saw on nominal 1.0m sample lengths while respecting geological contacts. Samples are bagged and ticketed prior to delivery by Company personnel to the ALS commercial laboratories in Burnie, Tasmania, for sample preparation. The half core samples are crushed to 80% passing 2mm, riffle split to 500g and then pulverized to pass 75um. Coarse duplicate sampling is conducted every 20 samples to assess variability of the coarse crush. Cu and multi-element assay is by 4-acid digest followed by ICP-MS at ALS laboratories by method ME-ICP61a). Au assay is by 30g fire assay at ALS laboratories by method Au-AA25. Certified reference materials (CRMs), blank and duplicate QAQC samples are included in sample submissions at 20 sample intervals. All QAQC samples were within acceptable limits (2 standard deviations for CRMs, duplicates 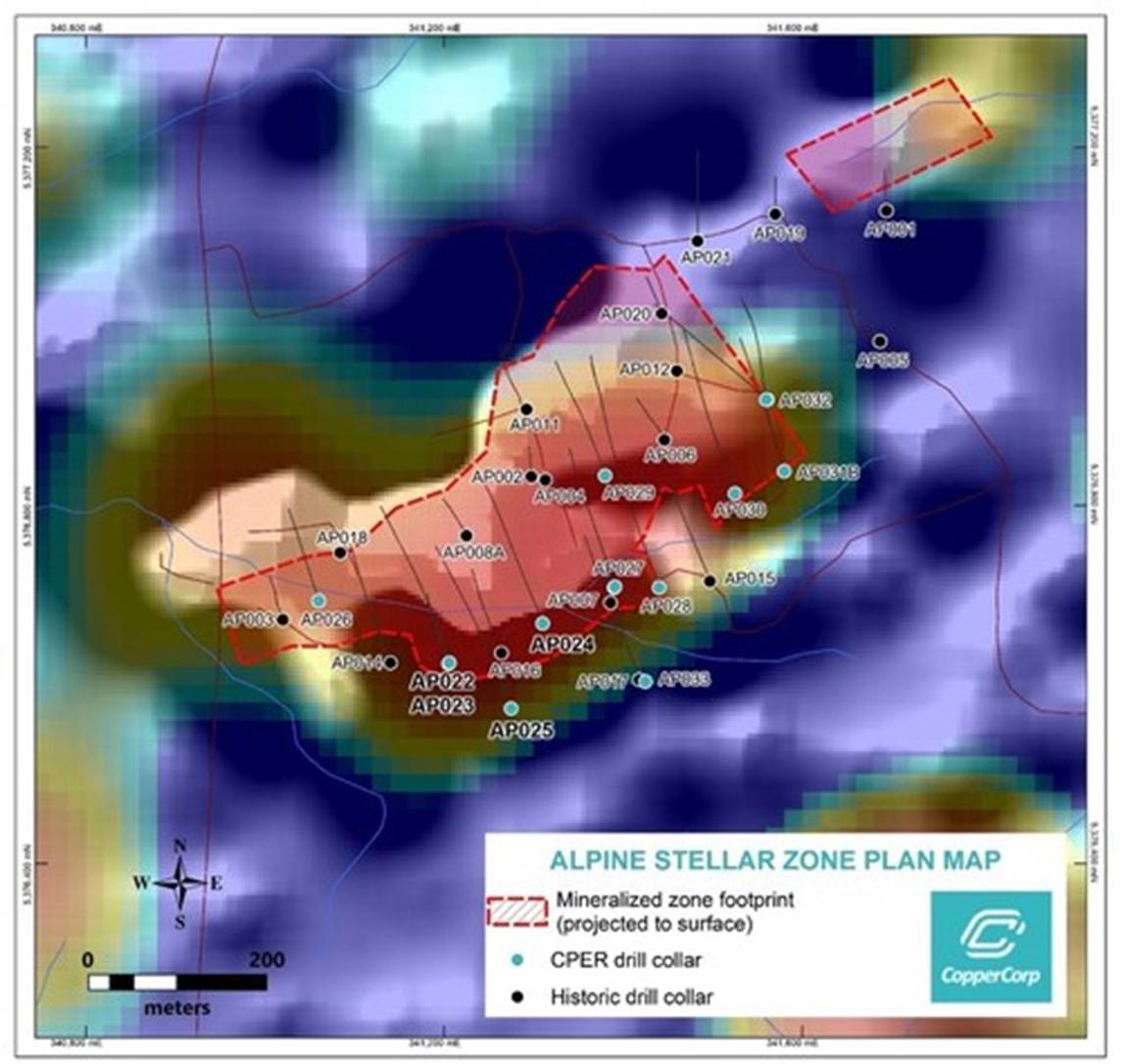 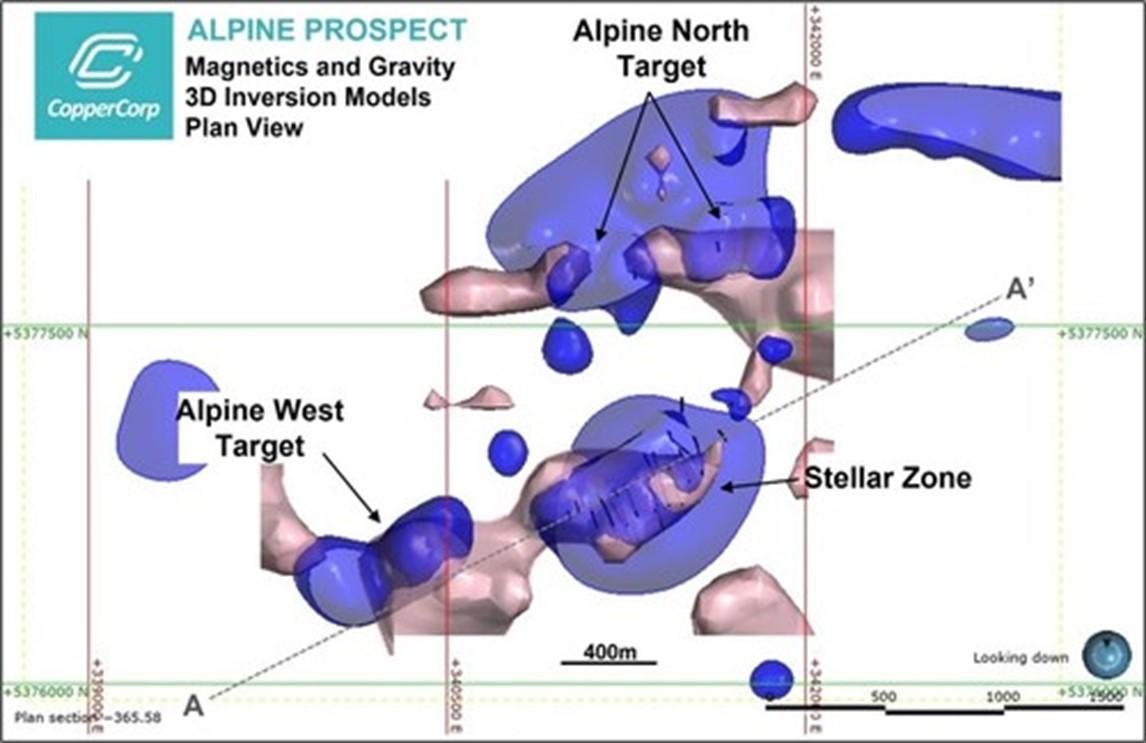 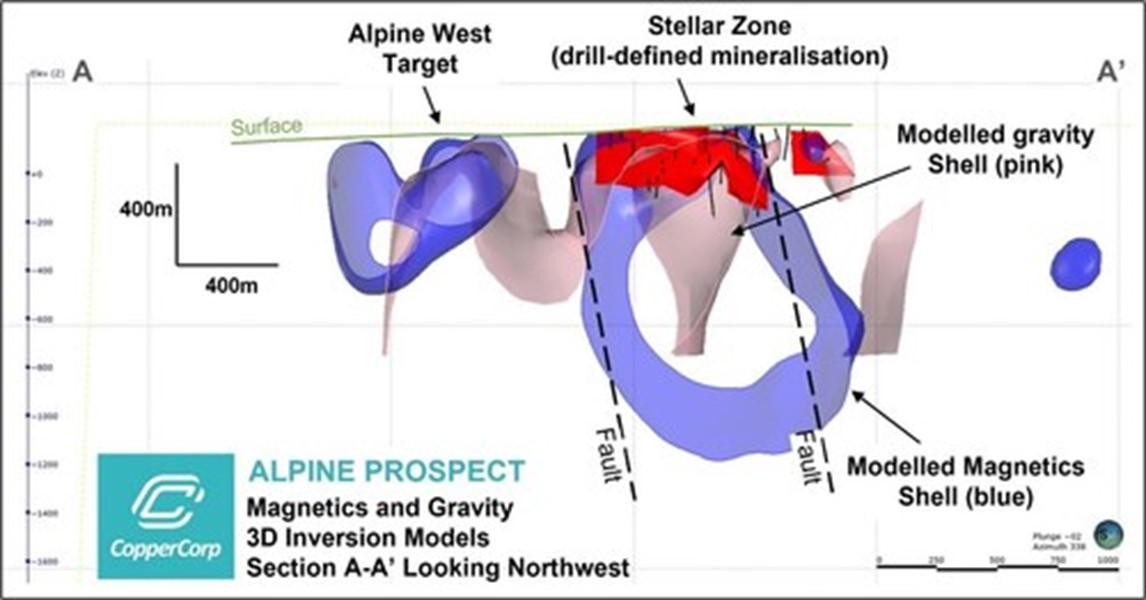 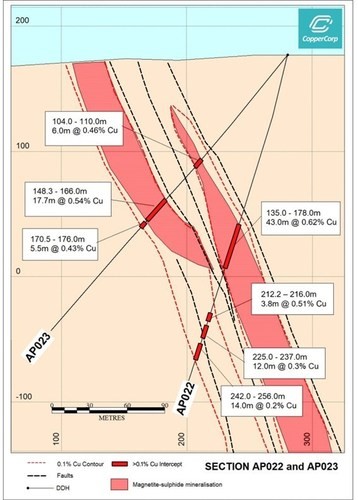 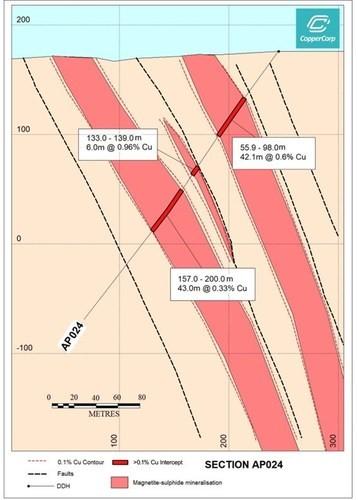 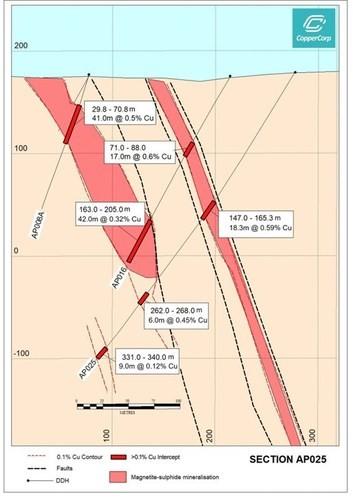 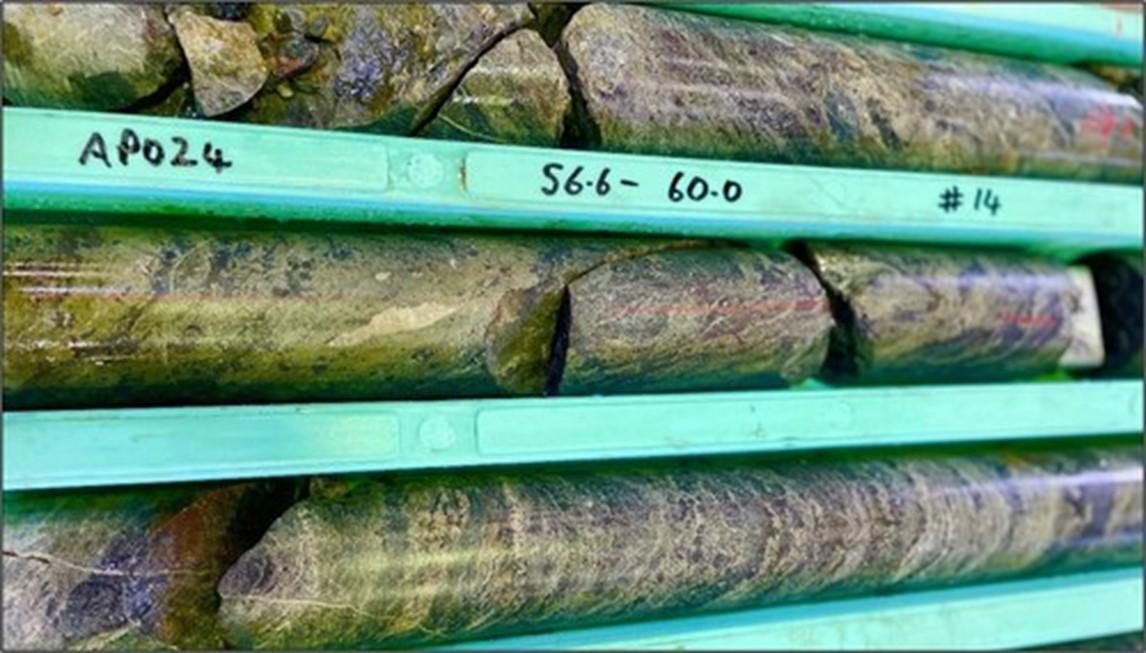 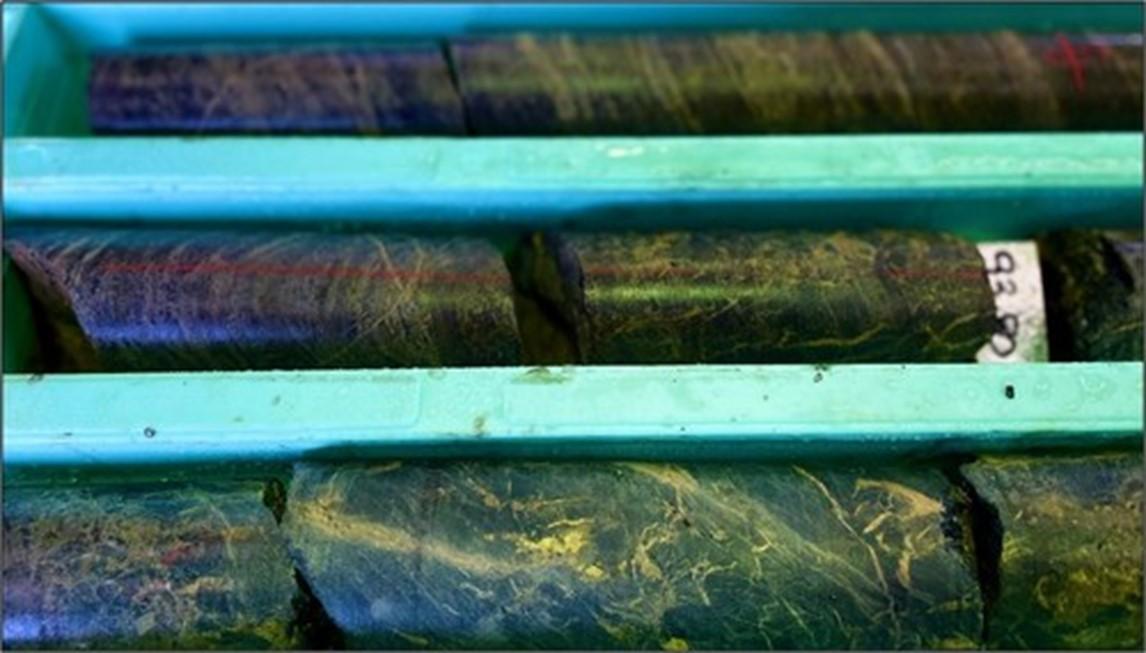 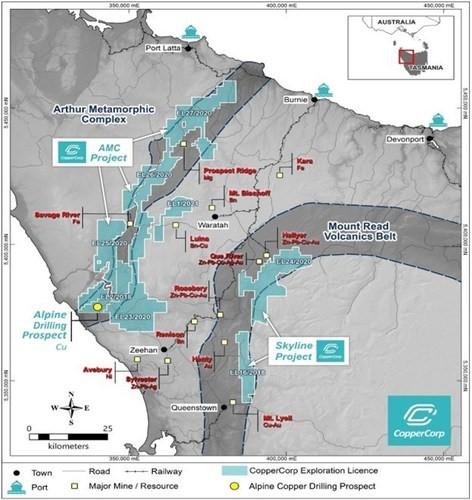