China Gold International Resources is Assisting with Comfort and Relief after the Geological Disaster. The Company Appreciates Public Support.

China Gold International Resources is Assisting with Comfort and Relief after the Geological Disaster. The Company Appreciates Public Support. 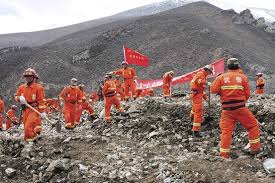 China Gold International Resources Corp. Ltd. (TSX: CGG; HKEx: 2099)  reports that according to the Government of the Tibet Autonomous Region of the People’s Republic of China, mutual and final agreements in respect of comfort and relief arrangements after the natural geological disaster  which occurred in Ze Ri Mountain, Pu Lang Valley, Si Bu Village, Zha Xi Gang Town, Mozhugongka County, Lhasa City, Tibet Autonomous Region of the People’s Republic of China have been reached between all family members of the 83 deceased or missing workers and the employers of those workers. The employers of the workers are 4 external independent contractors engaged by Tibet Huatailong Mining Development Ltd. the Company’s wholly-owned subsidiary that operates the Jiama Mine.

In addition to actively assisting the government in rescue and recovery work, Tibet Huatailong has also voluntarily provided 611 vehicles, 1,990 trained personnel and approximately RMB5 million for temporary assistance to the families of the victims from the landslide with transportation, accommodation and memorial service arrangements.

The Board of Directors, management and employees of the Company acknowledge and deeply appreciate all expressions of support that have been received from the shareholders, analysts, investment community and the general public.

China Gold International Resources Corp. Ltd. is based in Vancouver, BC, Canada and operates both profitable and growing mines, the CSH Gold Mine in Inner Mongolia, and the Jiama Copper-Polymetallic Mine in Tibet Autonomous Region of the People’s Republic of China. The Company’s objective is to continue to build shareholder value by growing production at its current mining operations, expanding its resource base, and aggressively acquiring and developing new projects internationally. The Company is listed on the Toronto Stock Exchange (TSX: CGG) and the Main Board of The Stock Exchange of Hong Kong Limited (HKEx: 2099).