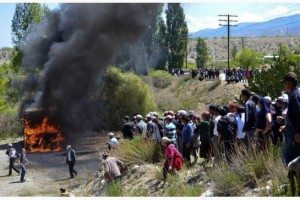 Centerra Gold Inc. (TSX:CG) today reported that the national grid power supply to the Kumtor mine has been disrupted by local protestors. The road leading to the mine also continues to be blocked by illegal protests. The mine has begun an orderly shutdown of the milling facility using back-up diesel-generated power. The camp and other facilities at site are also currently operating on back-up power. Mining operations have also been suspended other than continuing operations to manage the ice and waste in the high movement area of the open pit.

The Company continues to cooperate closely with the Government and local authorities with a view to a peaceful resolution of the situation. If grid power and road access is not restored in a timely manner the Company expects that there will be a material negative impact on the Company’s operations, including its gold production and financial results. The Company expects to provide further information, including the potential impact on production as events warrant.

Centerra is a gold mining company focused on operating, developing, exploring and acquiring gold properties primarily in Asia, the former Soviet Union and other emerging markets worldwide. Centerra is a leading North American-based gold producer and is the largest Western-based gold producer in Central Asia. Centerra’s shares trade on the Toronto Stock Exchange (TSX) under the symbol CG. The Company is headquartered in Toronto, Ontario, Canada.