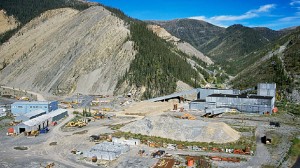 Canadian Zinc Corporation (TSX:CZN)(OTCQB:CZICF report that on March 15, 2013 the Mackenzie Valley Land and Water Board (the “Board”) issued a Draft Type “A” Water Licence and two Draft Type “A” Land Use Permits for the operation of the Prairie Creek Mine.

This Water Licence will entitle Canadian Zinc (Licensee) to conduct mining, milling and associated activities at the Prairie Creek Mine Site, dewater the underground mine for the purpose of mining, use water for processing and domestic purposes, and to dispose of waste for mining and milling, and backfill paste tailings and waste rock into the underground mine.

The Land Use Permits will authorize construction and other activities on the Prairie Creek Minesite and on the winter road Transfer Facility near the Liard highway.

“The Water Licence and Land Use Permits are the main required permits to authorize mining operations at the Prairie Creek Mine, and CZN commends the Water Board for getting the draft permits issued on time, as per its previously announced schedule,” said Alan Taylor, Chief Operating Office of Canadian Zinc.

This Class “A” Water Licence will be issued subject to the conditions contained therein with respect to the taking of water and the depositing of waste in waters or in any place where such waste may enter any waters.

The draft Licence requires Canadian Zinc (Licensee), in conducting its activities under the Licence, to take every reasonable precaution to protect the environment and to make best efforts to consider and incorporate any scientific and Traditional Knowledge that is made available.

The draft Licence also includes three separate options for the water storage pond(s), one of which will be selected in the final Licence, and notes that the proposed draft conditions for effluent quality criteria requirements will be sent under separate cover (expected within the next week). The amount and timing of the various security deposits required under the permits has not yet been determined.

The draft Land Use Permits relate to the Prairie Creek Minesite and the winter road Transfer Facility near the Liard highway and contain various conditions relating to location, equipment, construction, storage, security deposit, wildlife and restoration.

The Water Board previously issued the final operating Land Use Permit for the winter road itself on January 10th, 2013.

As anticipated, and as usual in this permitting process, the draft Water Licence requires that further information is to be provided before and after construction and mill commissioning, mostly in the form of detailed designs and management plans. Canadian Zinc has already embarked on detailed design work and is well advanced in this area. Most of the information for the management plans already exists, having been prepared during the environmental assessment and permitting process, and preparation of the required management plans will mostly require only revision and updating.

The Water Board has circulated the draft Water Licence and draft Land Use Permits to the government agencies and departments and to interested parties and requested comments by April 12, 2013. Canadian Zinc will have a further period of one week to review any comments and to respond to the Water Board with its own comments. All comments received will be used in the evaluation of the final licence and permit conditions. The revised draft Licence and draft Land Use Permits will then be submitted to a meeting of the Water Board for formal approval.

Following approval by the Water Board, the Water Licence will be sent to the federal Minister of Aboriginal Affairs and Northern Development for ratification.

Copies of the draft Licence and draft Land Use Permits and information on all regulatory correspondence and documents are posted on the MVLWB website public registry at: http://www.mvlwb.ca/mv/registry.aspx under the various CZN permit application numbers.