Benchmark Metals Inc. (TSX-V: BNCH) (OTCQB: CYRTF) (WKN: A2JM2X) is pleased to report the review and definition of a drill-defined, bulk-tonnage Exploration Target for the Cliff Creek Zone. The Cliff Creek exploration target currently measures 1.2 km in strike length, 300 metres wide and 300 metres deep while remaining open in all directions. Using current and validated historical data, the Zone hosts a target of 1,682,000 ounces gold equivalent up to 1,923,000 ounces AuEq with an average grade ranging from 1.71 grams per tonne (g/t) AuEq up to 1.73 g/t AuEq utilizing a 0.5 g/t gold cutoff (Table 1). The potential quantity and grade is conceptual in nature. There has been insufficient exploration to define a mineral resource and it is uncertain if further exploration will result in the target being delineated as a mineral resource. The Lawyers Project holds three additional Exploration Target areas, including the Amethyst Gold Breccia (AGB), Dukes Ridge and Phoenix zones. All zones lie within an extensive 10km2 alteration zone in the heart of the Lawyers Project, situated in the Stikine Terrane of northern British Columbia, Canada, and falling within the prolific, mineral endowed ‘Golden Horseshoe’.

John Williamson, CEO commented, “The Cliff Creek Exploration Target is the most advanced of the four target areas and all remain open in all directions. Drilling in 2019 indicates that the AGB and Dukes Ridge exploration targets have similar characteristics and potential as the Cliff Creek zone. Work in 2020 will be designed to develop the exploration targets toward a definitive resource with future mining potential. Additional high-grade ounces can be targeted below the near-surface mineralization. The Benchmark team has discovered new areas of parallel mineralization and anticipates more new zones from expansion drilling that will uncover the bulk tonnage aspects that were historically overlooked”.

The Exploration Target is based upon mineralization shapes that were constructed utilizing the results of the 2018, 2019 and historic drilling for the Cliff Creek target area and by conducting section by section geological and mineralization interpretation. The shapes were block modelled and estimated for gold, silver and gold equivalent using standard statistical estimation treatments. The estimation solids for Cliff Creek are intersected by a total of 41 holes completed in 2018 and 2019, which have been sampled for the most part in their entirety, 79 historic holes, of which 17 have been infill sampled during 2018 and 2019, along with 62 historic holes most of which have only been partially sampled. The mineralization solids contain a total of 4,468 sampled intervals representing 4,684 m of sampled drill hole core or chips. Capping analysis was conducted as part of the estimation process and includes a cap of 8.1 g/t for gold and 650 g/t for silver in the estimation that was conducted. 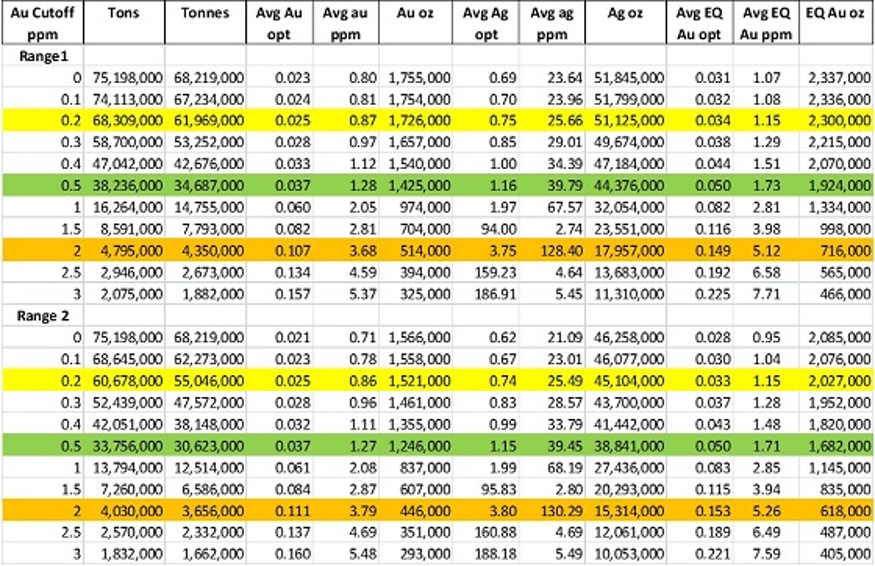 *A silver to gold ratio of 80:1 has been used in the calculation of AuEq
**Total ounces may not add due to rounding.
***The tonnes, grade and ounces presented are an Exploration Target, and are conceptual in nature, there has been insufficient exploration to define a mineral resource and it is uncertain if further exploration will result in the target being delineated as a mineral resource. The Target has not been evaluated for reasonable prospects for future economic extraction as metallurgical work and drilling are planned and ongoing.

The bulk tonnage Exploration Target ranges from 30.6 million tonnes to 34.7 million tonnes with a range in grades of 1.71 g/t AuEq to 1.73 g/t AuEq at a lower cutoff of 0.5 g/t Au, yielding an estimated range of 1,682,000 AuEq ounces to 1,924,000 AuEq ounces (Table 1). The potential quantity and grade is conceptual in nature. There has been insufficient exploration to define a mineral resource and it is uncertain if further exploration will result in the target being delineated as a mineral resource. The depth of this Target has been assessed using a variety of lower Au cutoffs. At a lower cutoff of 0.2 g/t approximately 60% of the AuEq ounces are within 200m of surface and 86% of the AuEq ounces are within 300 m of surface. This increases to 63% and 90%, respectively using a lower Au cutoff of 0.5 g/t (Table 1). The Exploration Target is reviewed at a range of lower Au cutoffs in Table 1. Range 1 treated unsampled intervals in the estimate for the historic holes as being blank i.e. no assigned assay value. Range 2 treated the unsampled intervals from the historic drilling as having an assigned grade of half the detection limit. Tonnages of mineralized material that were removed during historic mining have not been depleted from this exploration target. Based upon the historic records, the estimated tonnages historically mined at Cliff Creek were on the order of 50,000 to 100,000 tonnes.

Within the bulk tonnage Exploration Target, there is a higher grade Exploration Target of 4.03 million tonnes to 4.8 million tonnes with a range of grades of 5.12 g/t AuEq to 5.26 g/t Au Eq using a lower cutoff of 2 g/t, which yields an estimated 618,000 AuEq ounces to 716,000 AuEq ounces (Table 1). The potential quantity and grade is conceptual in nature. There has been insufficient exploration to define a mineral resource and it is uncertain if further exploration will result in the target being delineated as a mineral resource.

Cliff Creek was explored sporadically in the 1980’s and 1990’s while the Cheni Mine was producing gold and silver primarily from the Amethyst Gold Breccia Zone (AGB). Success from this exploration led to underground development at Cliff Creek, including a decline and six levels with very little production. Similar to the rest of the Lawyers Project, Cliff Creek was explored only intermittently after the closure of the Cheni Mine, until Benchmark initiated its systematic, comprehensive and multi-faceted exploration programs in 2018 and 2019. 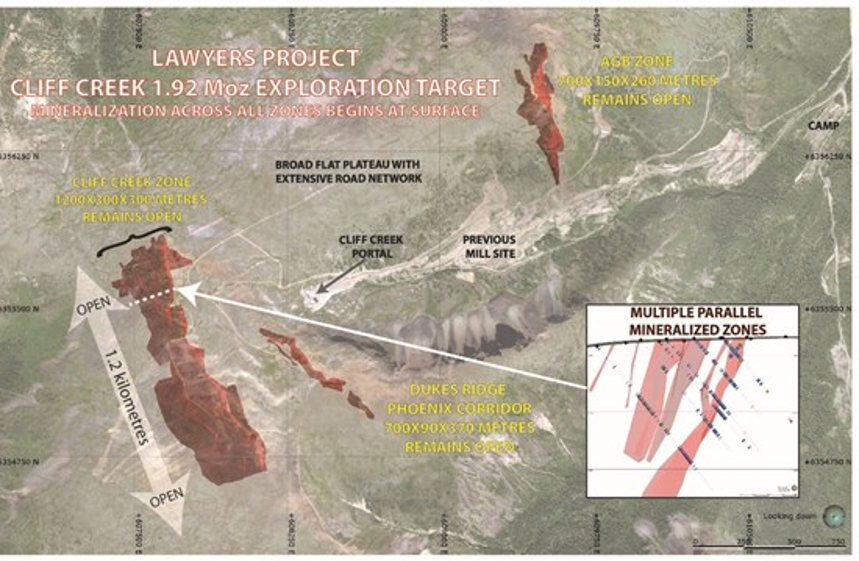 Figure 1: Plan view map of select exploration targets at the Lawyers Project outlining the size and potential of the Cliff Creek, Duke’s Ridge and AGB zones. 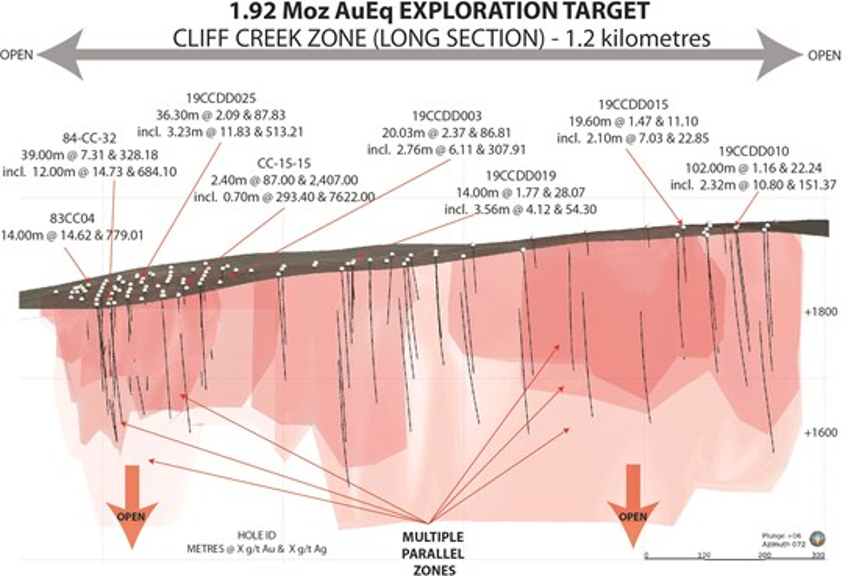 Figure 2: Long-section of the Cliff Creek and Cliff Creek South zones showing the potential to connect the two into a large resource area with selected drill highlights from historical and current exploration.

Benchmark is in the planning stages of a fully funded expanded scope of work 2020 exploration program. The Program will focus on the definition and expansion of key exploration target areas within a 10km2 radiometric anomaly, including exploration drilling at new or previously untested occurrences. Cliff Creek will see drilling along its entire 1.2 km current strike length, as well as north and south of the currently defined mineralization. Benchmark will provide a 2020 program update at completion of drill planning.

Results from samples were analyzed at ALS Global Laboratories (Geochemistry Division) in Vancouver, Canada (an ISO 9001:2008 accredited facility). The sampling program was undertaken by Company personnel under the direction of Rob L’Heureux, P.Geol. A secure chain of custody is maintained in transporting and storing of all samples. Gold was assayed using a fire assay with atomic emission spectrometry and gravimetric finish when required (+10 g/t Au). Analysis by four acid digestion with 48 element ICP-MS analysis was conducted on all samples with silver and base metal over-limits being re-analyzed by atomic absorption or emission spectrometry. Rock chip samples from outcrop/bedrock are selective by nature and may not be representative of the mineralization hosted on the project.

It should be noted that the Cliff Creek Exploration Target has not been optimized or pit constrained and may include ounces that have been mined. In addition, further drilling is planned in 2020 in order to mitigate the effects of the unsampled historic intervals that intersect the Cliff Creek mineralization solids and to provide material for critical metallurgical studies that are currently ongoing. The potential quantity and grade of the exploration target is conceptual in nature. There has been insufficient exploration to define a mineral resource and it is uncertain if further exploration will result in the exploration target being delineated as a mineral resource.

The technical content of this news release has been reviewed and approved by Michael Dufresne,
M.Sc., P.Geol., P.Geo., a qualified person as defined by National Instrument 43-101.

Benchmark is a Canadian mineral exploration company with its common shares listed for trading on the TSX Venture Exchange in Canada, the OTCQB Venture Market in the United States, and the Tradegate Exchange in Europe. Benchmark is managed by proven resource sector professionals, who have a track record of advancing exploration projects from grassroots scenarios through to production.