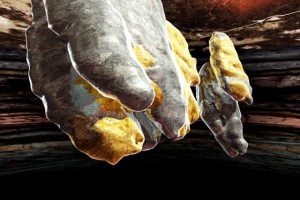 Bayfield recently completed a program of advanced geological, geotechnical and geochemical studies at the Company’s Burns Block and “B” Block properties. The main goal of the program was to increase confidence in the geometry, grade distribution and additional exploration potential of the up plunge and down plunge portion of the Intrepid shoot of gold-silver mineralization located in the eastern portion of the Burns Block property. While the Intrepid shoot was the main focus of the work program, the investigations also covered the high-grade gold-silver mineralized zones located in the western portion of the Burns Block as well gold and silver mineralization discovered on Bayfield’s 100% owned mineral rights “B” Block property to the northeast.

The results of the program are being used in gold-silver zone extension drilling in several areas of the Burns Block project including Intrepid zone extension exploration.

Highlights from this work program included:

A drill rig and crew by Rodren Drilling Ltd. are currently being mobilized to the Burns Block with drilling expected to resume around the middle of August.

Bayfield VenturesCorp. is exploring for gold and silver in the Rainy River District of north-westernOntario. The Company is fully funded to finish its planned 100,000 metre diamond drill program with drilling concentrated on the flagship Burns Block gold-silver project.