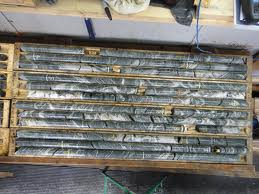 “Today’s results continue to demonstrate the broad widths and very high nickel-PGE tenure of the Horizon 3 sulphide zone and expand the discovery to depth where it remains open,” said Darin Wagner, President and CEO of Balmoral. “Results from an additional 8 holes are expected before year end and we look forward to an exciting year ahead as we continue the delineation of the Horizon 3 discovery and begin the process of evaluating the balance of the Grasset Ultramafic Complex (‘GUC’) for additional zones of nickel-copper-PGE mineralization.”

* All intercepts reported are down hole lengths, not true thicknesses. Insufficient drilling has been completed to date to define the orientation of the mineralized zone in space
# Upper portion of mineralized zone terminated by Porphyry Fault

Reported drill intercepts have now traced the Horizon 3 discovery to a vertical depth of 350 metres and for a similar distance along strike. The upper portion of the Horizon 3 sulphide zone in Hole GR-14-59 was terminated/removed by the Porphyry Fault. This hole confirms a southerly dip to the fault, as indicated on Figure 2, with the fault block hosting the bulk of the intercepts to date broadening at depth. Hole GR-14-55 may have intersected a fault, which is currently interpreted to terminate the lower contact of the mineralized intervals in holes GR-14-22 and -23 located to the northwest. Additional drilling will be required to evaluate this interpretation and the orientation and offset on this feature.

Drilling continues to intersect a number of intervals of anomalous to locally high-grade gold mineralization, developed in sheared and strongly altered volcanic rock in the hanging wall to, or within the uppermost portion of, the Grasset Ultramafic Complex (“GUC”) (see Table 2 below). Gold mineralization occurs in quartz+/-carbonate veins within a sequence of sericite-carbonate-fuchsite-silica altered mafic and felsic volcanic rocks immediately in the hanging wall to the GUC or in isolated quartz-carbonate-talc veins cutting the GUC. Results from the holes released include an intercept grading 14.12 g/t gold over 1.90 metres in drill hole GR-14-58. Similar high-grade gold mineralization occurs at the Company’s Fenelon gold zone located 6 kilometres to the west of the area currently being tested. The gold mineralization at Fenelon is also associated with quartz-carbonate veins hosted by, or proximal to, an ultramafic sill interpreted as part of the GUC.

* All intercepts reported are down hole lengths, not true thicknesses. Insufficient drilling has been completed to date to define the orientation of the mineralized zone in space

Drilling will resume at Grasset in early 2015 with a goal of further delineating the Horizon 3 discovery and testing a number of promising targets elsewhere in the GUC. The Company will provide additional details on its recently completed low-level Mag/EM survey over the entirety of the GUC and surrounding areas as results and interpretations are completed.