Ascot Resources Ltd (TSX: AOT) (OTCQX: AOTVF) is pleased to announce the discovery of new high-grade gold mineralization at the “Day Zone” at the Company’s Premier Gold Project. The high-grade intercepts are located 300m west from the planned underground development at Big Missouri (see Figure 2). Mineralization is open along strike to the north and the south. The Day Zone is located on the Big Missouri Ridge, approximately 5 kilometres north of the Premier Mill. Additionally, an update is provided on Premier West.

Highlights from the Day Zone include:

As weather conditions improved in August, exploration was shifted to higher elevation targets at the Big Missouri Ridge after initial drilling was completed at Premier West. This news release summarizes the results from three drill holes (for a total of 715m) at the Day Zone at Big Missouri and seven drill holes (2,183m) from Premier West.

Derek White, President and CEO of Ascot commented, “We are excited about the discovery of another strategically located high-grade zone that could be transformative for Ascot. The new drilling referred to as the Day Zone is west of our known resources at the Big Missouri deposit and is within striking distance of our planned underground development. The Day Zone consists of quartz breccia hosted high-grade mineralization similar to Big Missouri. Additional drilling will have to be conducted to show continuity between the Day Zone and Big Missouri. We also completed additional drill holes at Premier West which improved our understanding of the orientation and boundary of the high-grade mineralization there. We are awaiting results from higher elevation drilling at Silver Hill and are commencing additional drilling at lower elevation targets such as Woodbine.”

Exploration drilling at the Day Zone was prompted by anomalous soil geochemistry on the west side of the Big Missouri Ridge (see Figure 1) and sporadic drilling from the 1980s that indicated the presence of quartz breccia with associated gold mineralization. Drill pad Day-1 was established below the top of the ridge in order to test as much vertical extent as possible. A total of six drill holes were completed from this pad and results from the first three holes are listed in Table 1 (assays are pending for the three other holes).

All three drill holes intercepted gold mineralization at two different elevations with the best intercepts exceeding historical results in this area. These intercepts occur at a depth that appears to be equivalent to the well-established Big Missouri zone on the east side of the ridge (see Figure 2). The first two holes (2212 and 2213) intercepted impressive grades with visible gold in hole 2213 (see Figure 3). The drill core indicates that the area may be affected by structures that offset mineralization and possibly rotated structural blocks which may account for the different orientation compared to what is known from the eastern side of the ridge where mineralization dips gently to the west. Figure 2 shows a 300m gap between the Day Zone and the planned underground development at Big Missouri. Additional drilling will be necessary and is currently being planned to explore this area as well as the northern and southern strike extent of the high-grade zone. The potential for additional resources in this area appears to be very high.

Table 1 Summary of exploration drill results from the Day Zone

True width is uncertain as there is not enough information about the orientation of mineralization in this area. 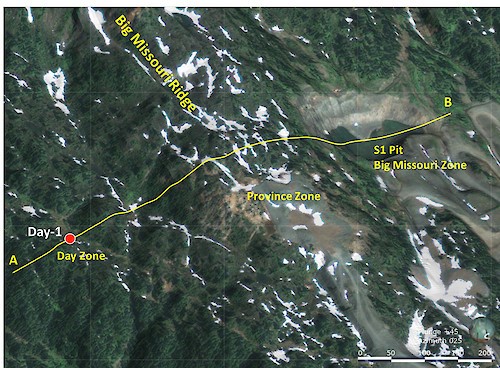 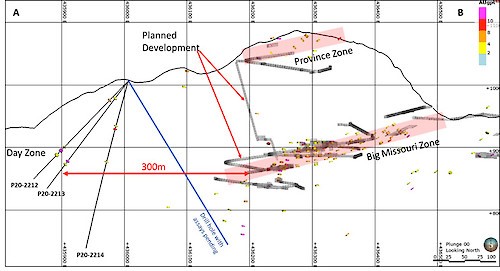 Figure 2 Image of a north looking cross section through the Big Missouri Ridge. The reported drill holes are located on the western side of the ridge while known resources at Province and Big Missouri occur at two different elevations further to the east. Three additional drill holes have been completed (assays are pending), two of these hole traces are off section, and parallel with hole P20-2213 while the third hole is shown in blue. Additional drilling is required to fully assess the potential of mineralization and its strike extent to the north and south. 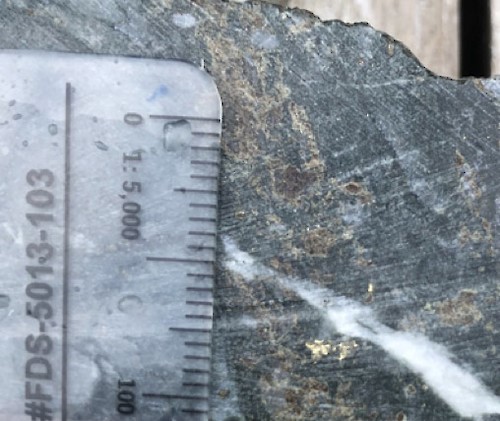 Figure 3 Image of visible gold grain in drill core from drill hole P20-2213 at a depth of 161.97m down the hole. The gold particle is associated with sphalerite, a zinc sulfide mineral, and quartz stockwork.

The Company reported drill results from drill pad PW-1 at Premier West pictured in news releases on July 29 and August 19. The results reported in those releases indicated the presence of high-grade mineralization to the west of Premier. The fences of drill holes from the one available drill pad followed the mineralization to the west by rotating the orientation of the drill holes. The westernmost drill holes suggest that the mineralized zone has a flatter dip than anticipated. The results summarized in Table 2 are believed to be from peripheral material to the established high-grade zone. Follow-up drilling will have to be conducted from a different drill pad that allows for drill holes perpendicular to the zone. The location of the planned drill pad PW-2 (see news release August 19) will have to be moved. Ascot is working to establish an alternative location and is hoping to conduct drilling before the end of the year.

True width is estimated to be 70-90% of reported intervals. The drill holes were targeted perpendicular to the expected zone orientation.

Lawrence Tsang, P. Geo., the Company’s Senior Geologist provides the field management for the Premier exploration program. John Kiernan, P. Eng., Chief Operating Officer of the Company is the Company’s Qualified Person (QP) as defined by National Instrument 43-101 and has reviewed and approved the technical contents of this news release.

Analytical work is being carried out by ALS Canada Ltd. (“ALS”). Ascot’s quality-assurance and quality-control program includes the use of analytical blanks to monitor for cross contamination, certified reference material standards to assess analytical accuracy, and duplicate samples to quantify sampling precision. This is in addition to the internal quality assurance program employed by ALS.

Samples are dried and weighed by ALS. They are then crushed to 75% passing 2mm, with 250g split and pulverized to 85% passing 75µm. Samples are processed at the ALS preparation lab in Terrace and sent to ALS in North Vancouver for analysis. There, all samples are digested using aqua-regia with an ICP-AES finish and fire assay with AA finish for gold. Samples over 100ppm silver are digested with aqua regia and then volumetrically diluted before an ICP-AES or AA finish (up to 1,500ppm). Samples over 1,500ppm silver are fire assayed with a gravimetric finish. Samples over 10ppm gold are fire assayed with a gravimetric finish. Identified or suspected metallic gold or silver are subjected to “metallics” assays. Sampling and storage are at the Company’s secure facility in Stewart.

Ascot is a Canadian-based exploration and development company focused on re-starting the past producing historic Premier gold mine, located in British Columbia’s Golden Triangle.  The Company continues to define high-grade resources for underground mining with the near-term goal of converting the underground resources into reserves, while continuing to explore nearby targets on its Premier/Dilworth and Silver Coin properties (collectively referred to as the Premier Gold Project).  Ascot’s acquisition of IDM Mining added the high-grade gold and silver Red Mountain Project to its portfolio and positions the Company as a leading consolidator of high-quality assets in the Golden Triangle.