The three new holes test part of the Northern Extension of the portion of the mineralized system that has was our 2021-2022 priority. The holes demonstrate the continuity of the mineral system, which remains open down dip and along strike towards undrilled portions of the patented claims leased in 2021.

All three drill holes intersected wide intervals of potentially “bulk tonnage” gold grades, that is grades within the parameters of grades currently being mined in the district.

Mr. Greg Hahn, V.P Exploration stated, “Recently completed surface mapping and sampling demonstrates continuity at surface of the quartz stockwork system with associated anomalous gold and silver values continuing northward from the locations of these core holes. The surface geochemistry is similar to what is evident at surface southward along the vein structure where drilling demonstrated increased thickness and grade with depth. Our interpretation is that we are at the very top of the boiling zone along the entire outcrop horizon of the mineral system.”

Mr. Mike Stark, President and CEO commented, “Arizona Silver has the treasury and technical resources in place to begin exploration in 2023, including drilling, immediately after we finalize contractual arrangements. I expect to release details in the very near future.” 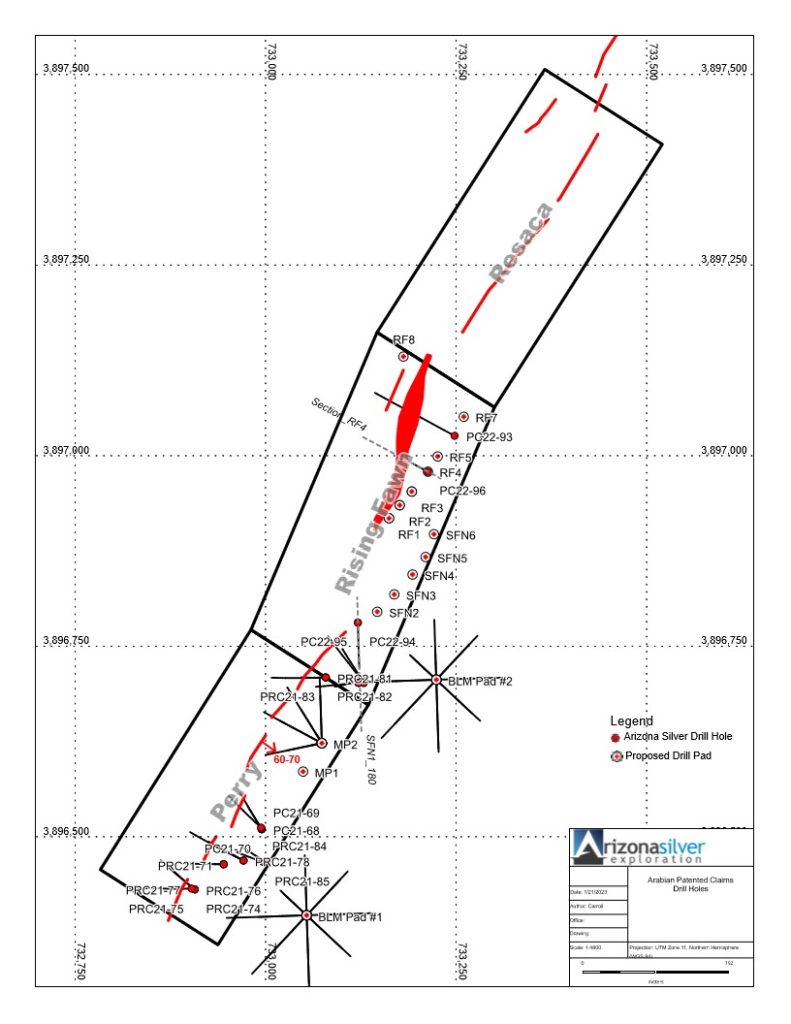 Core hole PC22-95 was drilled from a pad located approximately 50 metres north of previously completed RC and core holes PRC22-81 thru PC22-88.  It intersected the target from 79-140.5 metres (61.5 metres thick), within predominantly rhyolite breccia, grading 0.71 grams per tonne (“gpt”) gold (Au) and 11.46 gpt silver (Ag).  The FW vein breccia was intersected from 94.94 – 102.44 meters (2.5 metres thick) grading 5.10 gpt Au and 18.34 gpt ag within a thicker vein zone from 98.81-105.61metres (6.74 metres thick) grading 3.79 gpt Au and 16.18 gpt Ag, consisting primarily of yellow quartz clasts in a variably banded and bladed calcite matrix. Minor visible gold was identified in some of the yellow quartz clasts.  The balance of the mineralized intercept is composed of quartz and calcite stockwork in rhyolite breccia. 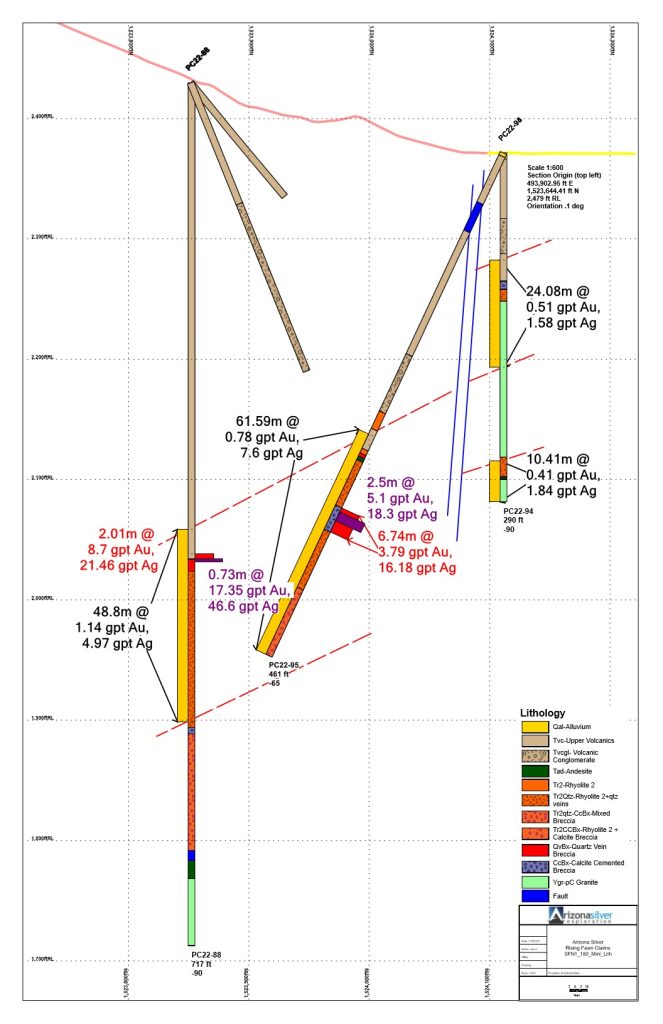 Core hole PC22-96, a vertical hole, was collared 225 metres north and west of hole PC22-95 and located to test the mineralized structure below a  1981 Meridian Gold reverse circulation drill hole.  PC22-96 intersected both the HW and FW vein within a package of strong to intense stockwork quartz with minor calcite from 38.7 – 93.6 metres (54.44 metres thick), in both rhyolite and granite breccia, carrying 0.71 gpt Au and 11.48 gpt Ag.  The HW and FW veins carried 3.6 metres at 2.4 gpt Au and 47.43 gpt Ag and 1.52 gpt Au and 8.4 gpt Ag respectively, The drill hole intersects mineralization approximately 116 metres below the surface where gold in stockwork quartz is exposed.  The intercept demonstrates that the mineral system continues and remains open both along strike and down dip from previous drill intercepts, which will be the focus of continued drilling in 2023. 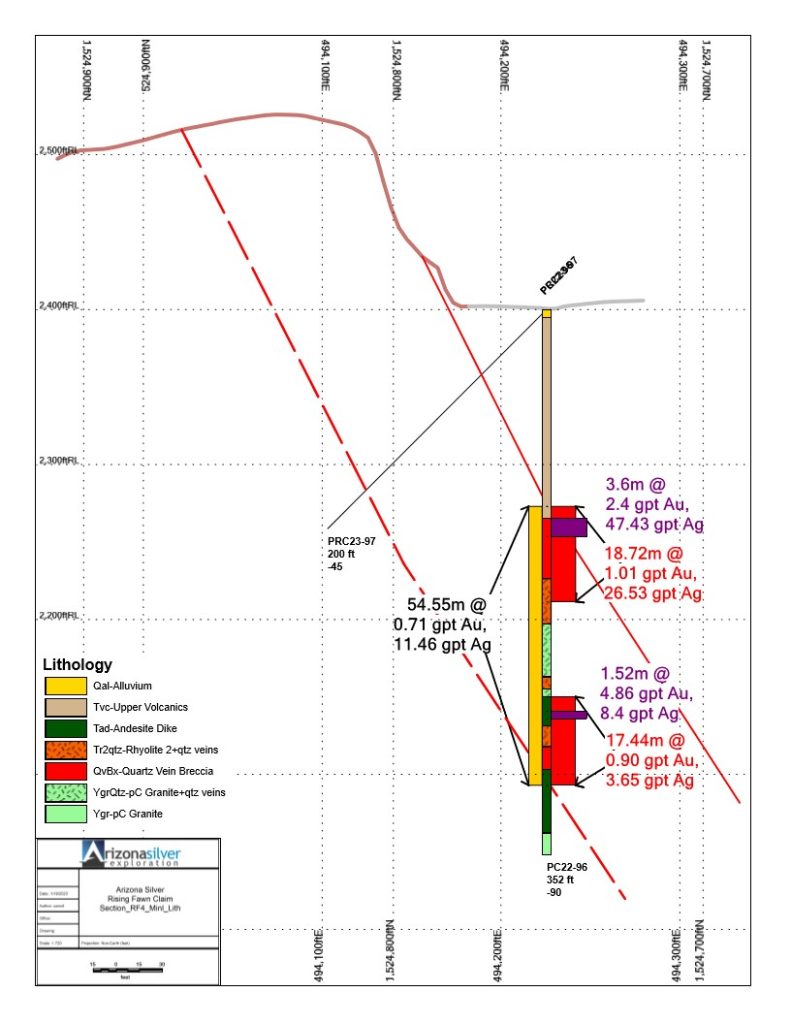 Core hole PC22-94 was a vertical hole drilled from the same pad as hole PC22-95, and intersected the mineralized zone high in the hole from 30.01-54.27 metres and lower down from 78.2-88.41 metres.  These intercepts are up-dip from the intercept in hole PC22-95 and at a shallower depth than the intercept in hole PC22-96, consisting primarily of weak stockwork quartz in predominantly granite with no evidence of the HW and FW veins present.  We interpret this intercept to be above the boiling zone given the absence of the high grade veins carrying boiling zone textures and the dominance of weak stockwork mineralization.

The Company maintains its own program of inserting Standard Reference material in the form of standards and blanks to the sampling stream, prior to being shipped to ALS’s preparation facility in Tucson, Arizona, in addition to the independent QA/QC protocols of ALS Global.

Gregory Hahn, VP-Exploration and a Certified Professional Geologist (#7122) is a Qualified Person under National Instrument 43-101 (“NI 43-101”) and has reviewed and approved the technical information contained in this news release.

Arizona Silver is a young exploration company focused on exploring gold-silver properties in western Arizona and Nevada. The flagship asset is the Philadelphia property and the subject of this news release.