Mr. James Sykes, Vice-President, Exploration and Development, comments: “We are very happy with the assay results of the Program as they’ve confirmed our visual assessments of the drill core. The Richard zone drill holes (RI-20-004 and RI-20-005) have confirmed that high-grade mineralization with grades consistently over 8 wt% TREO have been intersected over 145 m strike length along the WRCB zone (Wilson, Richard, Charles and Bell zones combined). The

WRCB zone outcrops at surface and starts as shallow as 10 m beneath the surface, representing an easily accessible high-grade monazite asset. The assay results have also proven that REE mineralization occurs within multiple sub-parallel trends of the System over 875 m strike length and down to 340 m vertical depth; both parameters currently defined by our drilling limits. These parameters prove the System is large and extensive, and is expected to grow with more exploration and diamond drilling efforts.”

The Company also wishes to announce that they have engaged the services of Dr. David London, a world-renowned pegmatite expert and authority, to help better understand the System. Identifying key components of the System, such as origins, mineralogical vectors, and structural influences, will provide for better exploration targeting for any additional high-grade REE zones that might exist on the Property. Dr. London is working closely with Dr. Irvine R. Annesley (advisor and consultant to Appia) and Mr. Sykes.

The Company is planning to be very active advancing the Property in 2021. Prior to the anticipated start of the Alces Lake summer exploration program, the Company plans to start metallurgical bench-scale testing at the Saskatchewan Research Council (“SRC”) facilities using rock samples from the WRCB zone to test physical separation of monazite from the host rocks, to separate and produce isolated uranium oxide (U3O8), to produce a mixed REE-carbonate, and to eventually produce Nd and Pr oxides. A microprobe study is currently underway at SRC to determine the mineralogical host for the high-grade gallium observed within the Alces Lake results. The Company believes the host is monazite, and if so, gallium oxide extraction will also be investigated at SRC during the uranium and RE oxide extraction processes.

The suite of airborne and ground geophysical survey data acquired on the property since 2011 are being re-analyzed and re-interpreted by three independent contractors and consultants. Each re-analysis is using different data sets, such as magnetic, electromagnetic gravity and audiomagnetotelluric geophysical results. The objective of the re-analyses is to constrain and model the geophysical data sets to the current geological model defined by diamond drilling and surface mapping in an attempt to better target high-grade mineralization.

Planned field activities for the Alces Lake property during the summer 2021, include i) an airborne magnetic, EM and radiometric geophysical survey over the entire Property, ii) additional ground radiometric surveying and geological mapping, iii) additional ground AMT surveying within the main geological hinge area that hosts the high-grade occurrences discovered to date, and iv) an aggressive diamond drilling program (at least 5,000 m) to explore the property regionally for additional sub-surface high-grade REO occurrences.

Since detailed exploration began at Alces Lake in 2017, a total of seventy-four (74) REE and uranium bearing surface zones and occurrences over 45km of the System have been discovered on the Property. To date, less than 1% of the Property has been explored with diamond drilling. The Property is also located in Saskatchewan, the same provincial jurisdiction that has planned to develop a “first-of-its-kind” rare earth processing facility in Canada, which is scheduled to become operational by 2022.

The Property encompasses some of the highest-grade total and critical rare earth elements mineralization in the world. CREE is defined here as those rare earth elements that are in short-supply and high-demand for use in permanent magnets and modern electronic applications such as electric vehicles and wind turbines, (i.e: neodymium (Nd), praseodymium (Pr) dysprosium (Dy), and terbium (Tb)). The Alces Lake project area is 17,577 hectares (43,434 acres) in size, and is 100% owned by Appia. The project is located close to an old mining camp with existing support services, such as transportation (i.e., 15 km from the nearest trail), energy infrastructure (hydroelectric power), a 1,200 m airstrip that receives daily scheduled services, and access to heavy equipment.

Due to an unrecognized nugget effect of mineralization, SRC had re-analyzed the samples from drill hole HN-20-001 three separate times, including scanning electron microscope analysis.

All lithogeochemical results reported herein have passed rigorous internal QA/QC review and compilation. The technical content in this news release was reviewed and approved by Dr. Irvine R. Annesley, P.Geo, Advisor to Appia’s Board of Directors, and a Qualified Person as defined by National Instrument 43-101.

Appia is a Canadian publicly-traded company in the uranium and rare earth element sectors. The Company is currently focusing on delineating high-grade critical rare earth elements and uranium on the Alces Lake property, as well as prospecting for high-grade uranium in the prolific Athabasca Basin on its Loranger, North Wollaston, and Eastside properties. The Company holds the surface rights to exploration for 57,048 hectares (140,968 acres) in Saskatchewan.

The Company also has a 100% interest (subject to a 1% Uranium Production Payment Royalty and a 1% Net Smelter Return Royalty on any precious or base metals payable, provided that the price of uranium is greater than US$130 per pound) in 12,545 hectares (31,000 acres), with rare earth element and uranium deposits over five mineralized zones in the Elliot Lake Camp, Ontario. The Camp historically produced over 300 million pounds of U3O8 and is the only Canadian camp that has had significant rare earth element (yttrium) production. The deposits are largely unconstrained along strike and down dip.

Appia’s technical team is directed by James Sykes, who has had direct and indirect involvement with over 550 million lbs. U3O8 being discovered in five deposits in the Athabasca Basin. 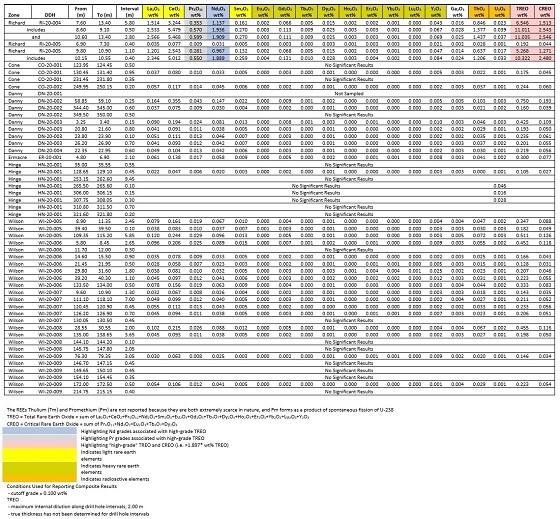 To view an enhanced version of Table 1, please visit:
https://orders.newsfilecorp.com/files/5416/72658_appia_image1.jpg