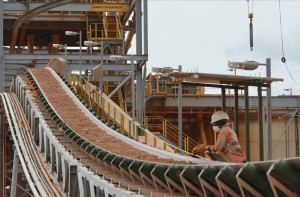 Americas Silver Corporation (TSX:USA)  (OTCQX:USAPF) is pleased to announce that, further to its press releases on May 24, 2016 and June 9, 2016, it has closed the concurrent private placement of 38,525,000 subscription receipts at a price of C$0.30 per Subscription Receipt, for total gross proceeds of approximately C$11.6 million. The additional proceeds from the Offering will be used to address the equity component of the overall financing package for San Rafael, with the remaining funding subject to advanced discussions with potential lenders and offtakers.

Combined with the original private placement, the Company has raised aggregate gross proceeds of approximately C$32 million. The net proceeds of the original private placement and Offering are expected to be used by the Company for capital programs at the Galena Complex and San Rafael Property, debt repayment, working capital and general corporate purposes.

The Offering was co-led by GMP Securities L.P. and Medalist Capital Ltd., on behalf of a syndicate of agents including Cormark Securities Inc. and Mackie Research Capital Corporation.

Each Subscription Receipt will be deemed to be exchanged upon satisfaction of the Release Conditions on or before September 19, 2016 without payment of any additional consideration, for one unit of the Company being comprised of one common share of the Company and one quarter of one Common Share purchase warrant of the Company. Each whole Warrant will entitle the holder thereof to acquire one Common Share at an exercise price of C$0.39 per Warrant Share until June 14, 2021.

All securities issued in the Offering are subject to a statutory four month hold period.

The Company is a silver mining company focused on growth in precious metals from its existing asset base and execution of targeted accretive acquisitions. It owns and operates the Cosalá Operations in Sinaloa, Mexico and the Galena Complex in Idaho, USA.