The cathode precursor material, produced by the Company’s pilot plant project and specialized cathode reactor, was analyzed with scanning electron microscopy to verify the spherical morphology requested by a tier-one battery manufacturer. American Manganese will be producing a range of precursor samples to be evaluated in collaboration with the tier-one battery manufacturer. 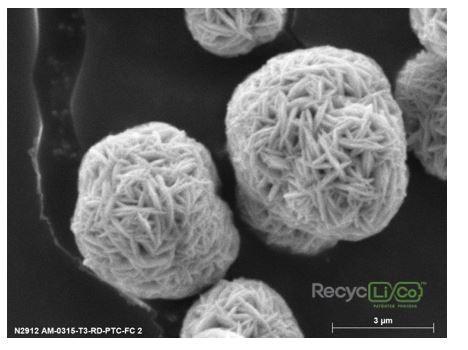 “American Manganese is advancing its RecycLiCo™ process with the aim to produce the highest value final product, the cathode precursor, with the fewest number of steps,” commented Larry Reaugh, President and CEO of American Manganese. “We believe our business strategy and patented technology provide the highest economic benefit and the most sustainable manner for recycling critical battery minerals from cathode waste.”

The Government of Canada has recently developed a list of 31 critical minerals for the sustainable economic success of Canada, which include battery minerals like lithium, cobalt, manganese, nickel, and aluminum. Battery technology will be essential for the global economy and Canada is poised to become a global leader in mining, battery manufacturing, electric vehicle manufacturing, and battery recycling. American Manganese believes its recycling patents and cathode precursor production know-how will be a valuable contribution to Canada’s thriving battery supply chain. The National Research Council of Canada Industrial Research Assistance Program (NRC IRAP) has provided support and funding to American Manganese for its technical feasibility project, formally known as Synthesis of Cathode Material Precursors from Recycled Battery Scrap.

Kemetco provides scientific expertise in the fields of Specialty Analytical Chemistry, Chemical Process and Extractive Metallurgy. Because Kemetco carries out research in many different fields, it can offer a broader range of backgrounds and expertise than most laboratories.

American Manganese Inc. is a critical metals company focused on the recycling of lithium-ion batteries with the RecycLiCo™ patented process. The RecycLiCo™ patented process was developed to offer a closed-loop and environmentally friendly solution for the recycling of cathode materials used in lithium-ion batteries. The recycling process provides high extraction and purity of cathode metals, such as lithium, cobalt, nickel, manganese, and aluminum. The RecycLiCo™ process was designed with the goal to produce recycled battery products that could be seamlessly and directly integrated into the re-manufacturing of battery cathodes using minimal processing steps.