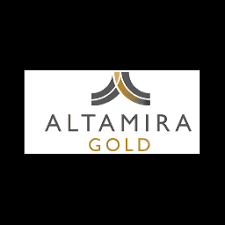 Altamira Gold Corp.’s (TSX-V: ALTA) (FSE: T6UP) (OTC Pink: EQTRF is pleased to announce that it has received assay results from the remaining five initial diamond drillholes holes (MBA005 to MBA009) which were recently completed at the Maria Bonita target within the Cajueiro project in Para state, Brazil.

The Cajueiro project is located approximately 75km NW of the town of Alta Floresta in the state of Mato Grosso (Figure 1) in central western Brazil and is easily accessible by road and has grid power. Cajueiro forms one of three key projects that Altamira controls in the region, the other two being Apiacas and Santa Helena (Figure 1).

Figure 1: Location of the Cajueiro, Apiacas and Santa Helena projects.

Several strong mainly untested gold-in-soil anomalies occur within a short radius of the Cajueiro resource area and include Maria Bonita, Sossego and Novo Sonho (Figure 2). Maria Bonita is the strongest of these peripheral gold-in-soil anomalies and is open to the west, with the current footprint of the geochemical anomaly covering an area comparable in size to the entire Cajueiro mineral resource area. 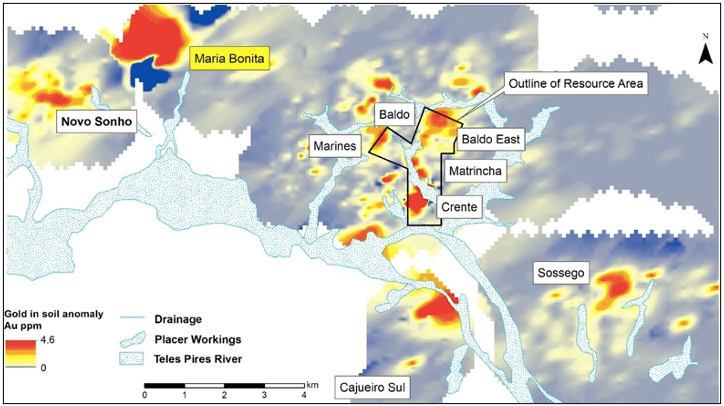 The Maria Bonita target is located approximately 7km northwest of the Cajueiro resource area (Figure 2) and is defined by a gold-in-soil anomaly which is at least 800 x 800m in size and open to the west. The central part of the anomaly returned gold values in excess of 1g/t gold in soils (Figure 3). 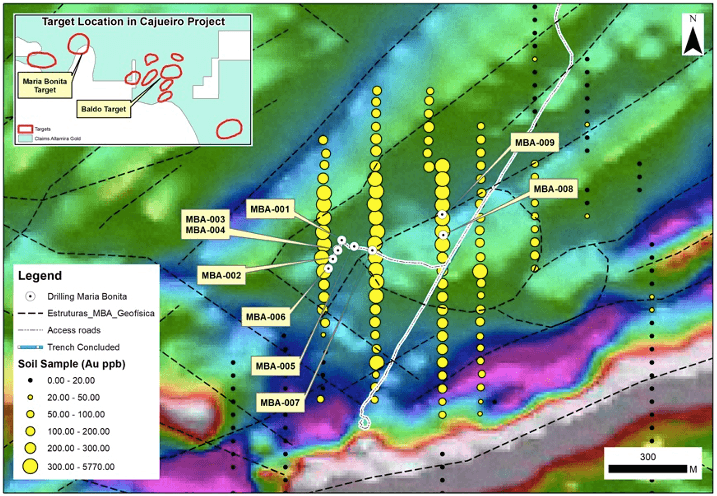 There is no outcrop in the target area and no prior hard-rock gold mining activity at Maria Bonita. The target has never been previously tested by drilling prior to the current drill program. Historic placer workings in the stream immediately south of the target suggest that there is a physical dispersion train of gold eroding from the area.

Results have now been received for all nine initial diamond drill holes. These holes were designed to determine the source of the extensive 800 x 800m soil anomaly which remains open to the west.

Core recoveries for the initial programme exceeded 99% in each drillhole.

Hole MBA005 was a step-out hole and was collared approximately 70m east of Holes MBA003 and MBA004 (Figure 4). It was drilled on an azimuth of 305º to a depth of 157m. The hole intersected pervasively altered quartz porphyritic rhyolite with some brecciated zones. The hole returned 69m @ 1.0 g/t gold from surface but gold values are strongly anomalous throughout with the upper 83.6m averaging 0.9g/t gold (Table 1, Figure 5). The remainder of the hole from 83.6m depth to the end of hole at 157m returned 73.4m @ 0.3g/t gold and the hole ended in mineralization. 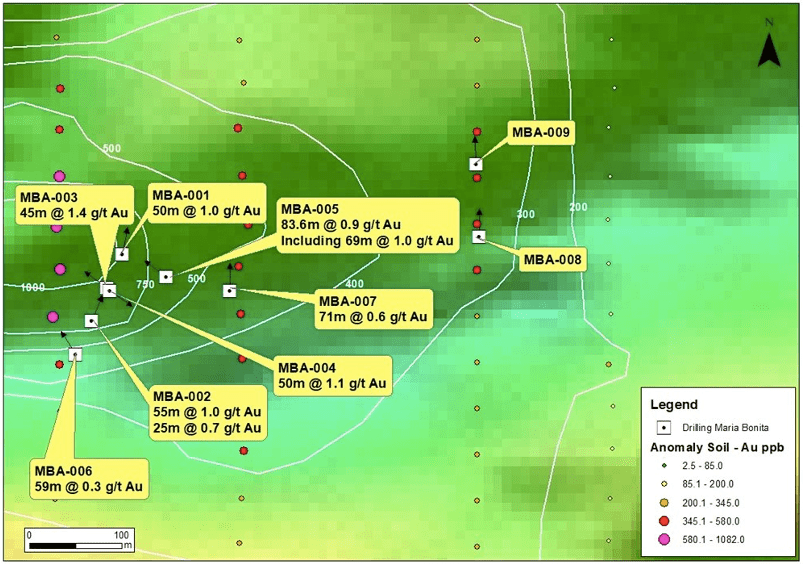 Hole MBA007 was a further step-out hole and was collared a further 50m east of MBA005 with an azimuth of 360°, an inclination of 55° (Figure 4). It reached a total depth of 179m. This hole intersected soil and saprolite to a depth of 25m downhole. The saprolite is developed in an interpreted younger medium-coarse felspar porphyry dyke which is un-mineralized. However, from 34m down hole, the hole cut altered reddish quartz porphyry rhyolite intrusive, similar to that found in holes MBA001-5. The hole returned 71m @ 0.6g/t gold from 34 – 105m. Below this depth, gold mineralization remains consistent, albeit at lower levels to a depth of 148m, returning 43m @ 0.5g/t gold (Figure 5, Table 1). 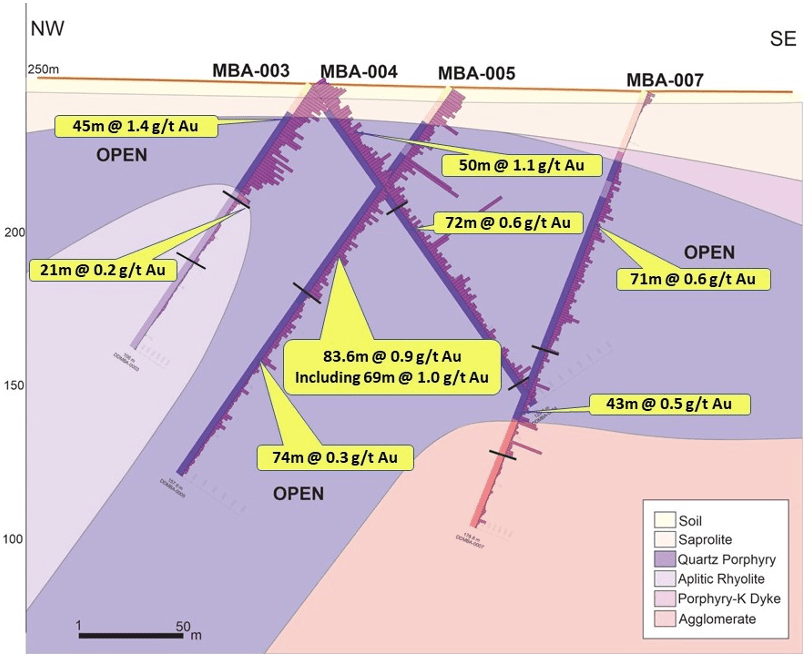 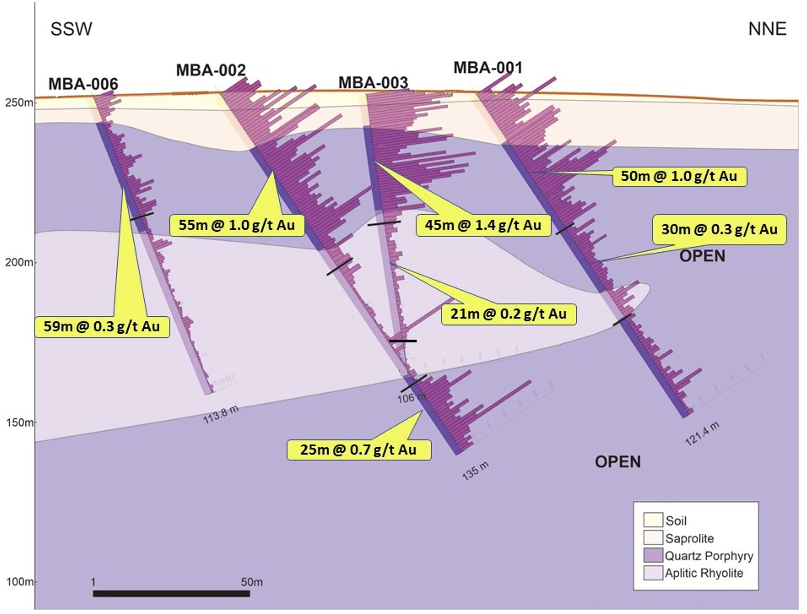 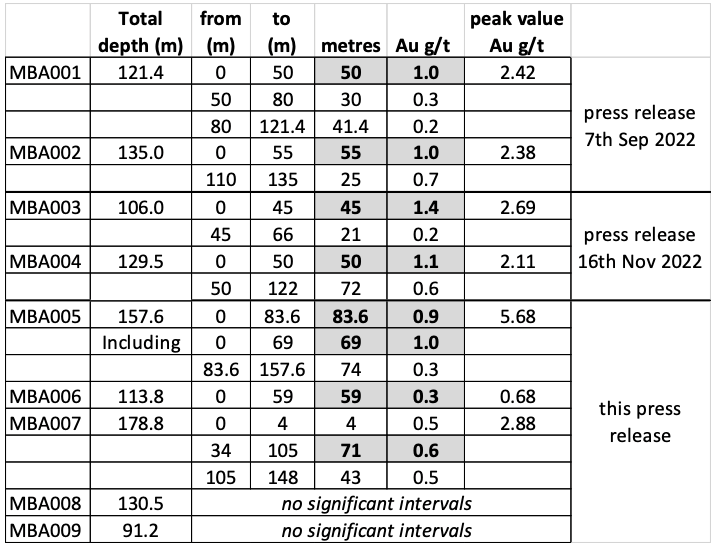 Hole MBA006 was collared 150m to the south of the original drillhole (MBA001) to test the southern area of the soil anomaly (Figure 4). The upper 59m contains an average of 0.3g/t Au, indicating the presence of a broad lower grade halo to the south of the main mineralized zone.

Holes MBA008 and 009 were drilled as significant 330m step-out holes to the east from the original drillhole. Both holes were drilled to test the ENE trend of a subtle magnetic feature shown in Figure 4 plus the gold-in-soil trend in the same overall orientation. The holes cut deep saprolite extending to 36m and 67m downhole respectively. Below this level, both holes cut medium grained volcanic agglomerates with intermittent, occasionally strong sericite/chlorite alteration.  The style of alteration differs from that of the western drillholes (MBA001-7) in not showing pervasive red (inferred potassic) alteration. Gold results were generally below 0.1g/t throughout, except for a veneer of up to 5m of soil and upper saprolite containing elevated anomalous gold in the range ~0.3g/t Au. These results imply that the soil anomaly in this location is reflecting surficial dispersion of gold laterally from the sub-cropping mineralization known to exist to the west.

At present the mineralized zone, hosted by rhyolitic quartz porphyry (intersected in holes MBA001-7) is interpreted to dip shallowly to the east from the sub-crop around drillholes MBA001-5. The coherent, near-surface mineralized zone remains unconstrained to the west.

The size of the mineralized zone at Maria Bonita remains unknown but the excellent results received from six of the initial nine reconnaissance drill holes at Maria Bonita suggest the presence of a significant discovery. As previously reported, there is no outcrop in the target area. Work has commenced on mapping the identified sub-cropping geology using a shallow auger. This is achieving holes up to 13m deep from which composite soil and saprolite samples will be collected to support future plans for additional drilling aimed at determining the size of the mineralized system.

Preliminary metallurgical testwork on two composite mineralized samples from holes MBA 001-004 was completed at TESTWORK Desenvolvimento de Processo Ltda in Nova Lima, Minas Gerais. The work was conducted under the observation of the Company’s consulting metallurgist Ian Gordon Hall Dun BSc (Eng), MSc. Results are anticipated in the next few weeks and should provide indications as to what proportion of the gold can be readily recovered by conventional technologies.

The Company proposes to make an application to the TSX Venture Exchange to extend the expiry dates from February 5, 2023 to November 5, 2023 of an aggregate of 10,000,000 outstanding share purchase warrants.

The Warrants were issued pursuant to a private placement that was completed on February 5, 2021 and were originally exercisable for two years from the closing date.  Each Warrant entitles the holder to purchase one common share in the capital of the Company at a price of $0.30 per share. All other terms of the Warrants will remain the same.

The extension of the Warrants remains subject to approval of the TSX Venture Exchange.

Altamira also announces that its shareholders approved the amended 10% rolling stock option plan at the annual meeting of shareholders held on November 23, 2022. The principal amendments to the stock option plan ensure compliance with the revised TSXV Policy 4.4 and include: (i) a provision that allows cashless exercise of stock options and net exercise of stock options; (ii) that share capital adjustments are subject to the prior approval of the TSXV, except where they relate to share consolidations or splits; and (iii) disinterested shareholder approval is required for any extension to stock options granted to individuals that are insiders at the time of the proposed amendment.