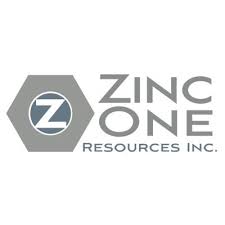 Zinc One Resources Inc. (TSX-V: Z) (OTC Pink: ZZZOF) (FSE: RH33) is pleased to report the final drill results from the high-grade zinc discovery in the Mina Chica zone located at the Bongará Zinc Mine project in north-central Peru. This high-grade zinc mineralization is approximately 200 metres long in a NW-SE direction and 120 metres wide in a NE-SW direction and is open to the west.

Jim Walchuck, President and CEO of Zinc One commented, “Results from the drill program at the Mina Chica zone surpassed our expectations and included a new high-grade zinc discovery. This is a spectacular exploration success and an excellent addition to the Zinc One story. Although the current drill permit precludes further drilling in the zone, there is potential to increase the size of the deposit. The Company will submit a drill-permit application to delineate this discovery in the near future.

The results of this overall program to date, and the coincident discovery, validate the positive results of our surface-sampling program. We will employ surface sampling as our primary targeting methodology to confirm and test the other prospective areas at the Bongará Zinc Mine project for the next round of drilling. At this time, we have only tested a relatively small portion of the six-kilometre mineralized trend.”

Mina Chica is one of three known zones of high-grade, near-surface zinc-oxide mineralization along a 1.4 kilometre mineralized trend that is being tested by this drill program. At Bongarita, which lies approximately 200 metres west of Mina Chica, all results from the 36 holes (587.2 metres) drilled have been reported. At Mina Grande Sur, which lies approximately 1.2 kilometres southeast of Mina Chica, results from 50 of 95 holes drilled, for a total of 803.6 metres, have been reported. Drilling at Mina Grande Centro has now commenced.

Geology and Discussion of Results

The zinc mineralization at the Bongará Zinc Mine project is classified as a Mississippi Valley-type deposit and is mostly hosted by strongly dolomitized brecciated limestones that are stratabound. The mineralization can also occur as tabular bodies with irregular boundaries, which is a characteristic of that mineralization encountered along the periphery of breccias. Hydrozincite (a zinc oxide mineral), smithsonite (a zinc carbonate mineral), hemimorphite (a zinc silicate mineral), and a zinc-aluminum-iron silicate are the primary zinc minerals that are hosted by soils, dolomitized breccias, heavily-weathered fractured and vuggy dolomitized limestones, and fine- to coarse-grained dolomitized limestones. At Mina Chica, the mineralization is typically zoned as either predominantly hydrozincite or predominantly smithsonite and hemimorphite, both zones with apparent variable amounts of iron. Drill holes MCH18004, 013, 014, 022, 035, and 041 define a core zone, approximately 100 metres x 100 metres, within the dolomitized breccia that host a near-surface zinc grade in excess of 30% (Figure 1.).

The results from these final holes at Mina Chica can be found below in Table 1. In addition, the map in Figure 1. shows the drilling and the general area of mineralization, as well as the high-grade core, at Mina Chica. 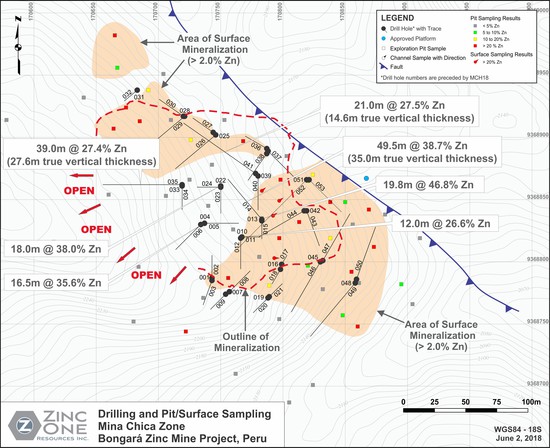 Zinc One follows a systematic and rigorous Quality Control/Quality Assurance program overseen by Dr. Bill Williams, COO and Director of Zinc One.

The sample from each core run is placed in a 60-centimetre long, plastic core box that has five columns. Core recovery, rock quality designation (“RQD”), and geologic features are logged and sample intervals, which are generally <2 metres, are chosen. Each core box is photographed and then sampled with a spatula (soil and heavily-weathered rock) or cut with a core saw, 50% of which is placed in a sample bag and stored on site in a secure location. The Company independently inserts certified control standards, blanks, and duplicates, all of which comprise at least 20% of the sample batch, to monitor sample preparation and analytical quality. The samples are stored in a secure area until such time they are shipped to the CERTIMIN laboratory in Lima, an ISO 9001 Certified laboratory, for preparation and assay. At the laboratory, samples are dried, crushed, pulverized and then a four-acid digestion is applied. This is followed by the ICP-AES analytical technique for 38 elements, including lead. The same method is used to assay zinc for values up to 20%. If zinc exceeds 20%, it is then analyzed using a titration method. The laboratories also insert blanks and standards as well as including duplicate analyses.

The technical content of this news release has been reviewed, verified and approved by Dr. Bill Williams, COO and Director of Zinc One, a qualified person as defined by National Instrument 43-101.

About Zinc One Resources Inc.

Zinc One is focused on the exploration and development of prospective and advanced zinc projects in mining-friendly jurisdictions. The Company’s key assets are the Bongará Zinc Mine Project and the Charlotte Bongará Zinc Project in north-central Peru. The Bongará Zinc Mine Project was in production from 2007 to 2008, but was closed due to the global financial crisis and concurrent decrease in the zinc price. Past production included 20% zinc grades and recoveries over 90% from surface and near-surface zinc-oxide mineralization. High-grade, zinc-oxide mineralization is known to outcrop between the mined area and the Charlotte Bongará Project, which is nearly six kilometres to the NNW and where past drilling intercepted various near-surface zones with high-grade zinc. Zinc One is managed by a proven team of geologists and engineers who have previously constructed and operated successful mining operations.