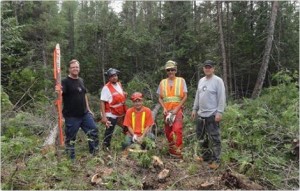 Zenyatta Ventures Ltd. (TSX VENTURE:ZEN) (OTCQX:ZENYF) is pleased to announce that the recent warrant exercise has yielded gross proceeds of $12,674,000. The warrants were priced at $1.00 and expired on June 24, 2013.

Aubrey Eveleigh, President and CEO stated “Some of the proceeds will be used to fund continuing drilling, resource estimate, metallurgical studies, graphite characterization and a preliminary economic assessment. The budget for this program is approximately $7.5 million. The Company is now in a great position to carry out the exploration and development program on our graphite deposit for the foreseeable future without a need for a capital raise.”

Zenyatta is developing a very rare hydrothermal or ‘vein-type’ graphite deposit it discovered in 2011 in northeastern Ontario, Canada. It is the largest and only known graphite deposit of this type under development in the world. Globally, the only graphite mines of this type are located in Sri Lanka, which have been in production since 1847. The current high grade, underground mining operations produce only 5,500 tonnes annually from narrow (5-10cm) veins. Despite the lack of volume, Sri Lankan ‘vein-type’ graphite has enjoyed great demand due to its unusually high purity and unique physical properties. Graphite veins are quite rare and in many industrial applications offer superior performance due to higher thermal and electrical conductivity.

Zenyatta’s Albany graphite deposit is located 30km north of the Trans Canada Highway, power line and natural gas pipeline near the communities of Constance Lake First Nation and Hearst. A rail line is located 70km away and an all-weather road approximately 4-5km from the graphite deposit. The deposit is near surface, underneath glacial till overburden and a thin veneer of Paleozoic sedimentary cover rocks.

Graphite is a natural form of carbon with the chemical formula C, which it shares with diamond and coal. The outlook for the global graphite market is very promising with demand growing rapidly from new applications. It is now considered one of the more strategic elements by many leading industrial nations, particularly for its growing importance in high technology manufacturing and in the emerging “green” industries such as electric vehicle components. The application for graphitic material is constantly evolving due to its unique chemical, electrical and thermal properties. It maintains its stability and strength under temperatures in excess of 3,500 degrees C and is very resistant to chemical corrosion. It is also one of the lightest of all reinforcing elements and has high natural lubricating abilities. Some of these key physical and chemical properties make it critical to modern industry.