Yorbeau Resources Inc. (TSX: YRB) is pleased to report that its partner IAMGOLD Corporation released assay results from its its 2021 exploration diamond drilling program completed on the Lac Gamble zone at the Rouyn Gold project. The project is located 4 km south of Rouyn-Noranda, Québec, and approximately 45 kilometers southwest of IAMGOLD’s Westwood operation.

The Company is reporting assay results from seven diamond drill holes, totaling 1,826 metres completed as part of the winter 2021 drilling program. Drilling activities are also currently progressing on the Augmitto and Cinderella areas, located approximately 1 to 3 kilometres west of the Lac Gamble zone, and results will be reported when received, validated and compiled.

The assay results reported herein are provided in Table 1, below, and include the following highlights (a longitudinal section illustrating the drilling program on the Lac Gamble zone is attached to this news release):

In a separate press release on the current results, Craig MacDougall, Executive Vice President, Growth, IAMGOLD, stated: “Our drilling program at Lac Gamble earlier this year specifically targeted some selected areas for possible extensions, as well as to complete some initial geotechnical drill holes to assess rock quality in the context of a potential underground mining scenario. The results continue to strengthen our understanding of the deposit geology and geotechnical rock quality appears in line with our expectations from the initial assessment. Despite the recent challenges faced by a shortage of available drilling rigs in the region, we continue to make solid progress in our project evaluation.”

The diamond drilling program on the Lac Gamble zone had two main objectives: 1) complete an initial geotechnical drilling campaign to collect preliminary data to assess rock quality of the host rock units with respect to an underground mining method; and, 2) test for potential extensions down plunge along the western boundary of the zone.

The geotechnical drill program consisted of four (4) holes for 720.5 metres and the data obtained appears to be in line with the anticipated geotechnical conditions to support a potential underground mining development scenario.

The expansion drilling program targeted potential down-plunge extensions to the west for which three diamond drill holes totaling 1,105 metres were completed. Unfortunately, due to the late start of the drilling program caused by a regional lack of drill rig availability, a planned larger program could not be completed during the optimal winter season.

All drill holes successfully intersected the targeted sheared Cadillac-Piché corridor, which hosts the mineralized Lac Gamble zone. The zone is associated with alteration varying from several metres to greater than 10 metres in width, exhibiting variable carbonatization, fuchsite, silicification, crosscut by a network of white quartz and brown tourmaline stockwork veins and breccias. Gold mineralization occurs as small specks of visible free gold associated with minor sulphides in quartz-tourmaline veinlets. Hole GA-21-782 has demonstrated the zone could extend further in its western extensions at depth.

The ongoing global COVID-19 pandemic continues to impact the local availability of exploration services. However, exploration drilling has resumed at the Rouyn Project in June and a planned 9,000 metre diamond drilling program is in progress to evaluate the resource potential of other selected targets, including the Cinderella and Augmitto areas located further west of the Lac Gamble zone and if timing permits to the east at the Astoria east zone.

The assay results from the drilling programs will be integrated with the existing geological, geochemical and structural information to support the development and refinement of preliminary deposit models on the property to support a future potential maiden resource estimate.

About the Rouyn Gold Project

The Rouyn Gold Property is located about 4 km south of Rouyn-Noranda, Quebec. With a long history of mining, the city of Rouyn-Noranda offers many advantages for mining and exploration, including political and social stability, good access and infrastructure, skilled mining personnel, and one of the most mining-friendly jurisdictions in the world.

The property covers a 12-kilometre stretch of the Cadillac-Larder Lake Break and contains four known gold deposits along the 6-km Augmitto-Astoria corridor situated on the western portion of the property. Two of the four deposits, Astoria and Augmitto, benefit from established underground infrastructure and have been the subject of technical reports that include resource estimates that were previously filed in accordance with Regulation NI 43-101.

IAMGOLD holds a purchase option with Yorbeau for the Rouyn Project. Under the terms of the purchase option agreement, IAMGOLD can acquire a 100% interest in the project by completing remaining scheduled cash payments totaling C$1.5 million and remaining exploration totaling approximately C$3.7 million by December 2022 (as of June 30, 2021). By the end of the expenditure period, the Company must complete a resource estimate in accordance with NI 43-101, after which the Company, at its election, can purchase a 100% interest in the project, subject to a 2% net smelter return, by paying Yorbeau the lesser of C$15 per resource ounce or C$30 million. 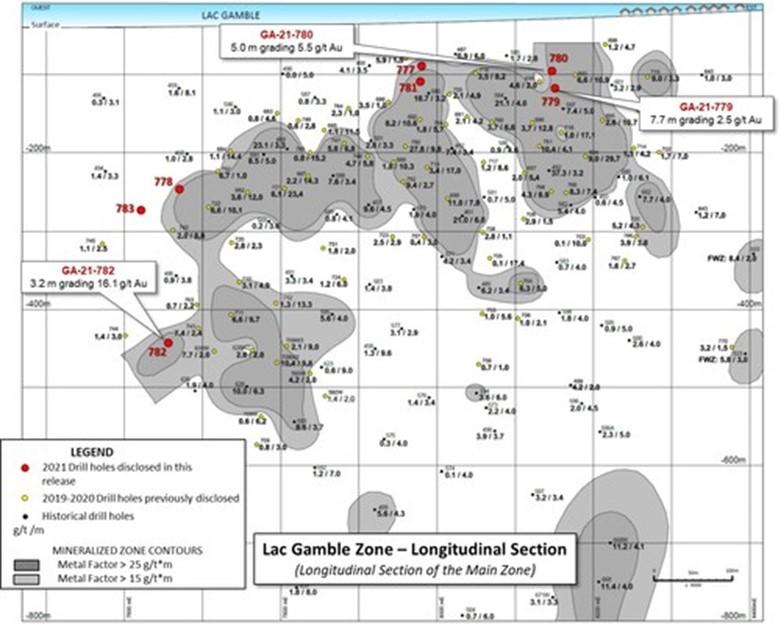 The Rouyn Property, wholly-owned by the Company, contains four known gold deposits in the 6–km–long Augmitto-Astoria corridor situated on the western portion of the property. The Company signed a definitive agreement in December 2018, whereby IAMGOLD has the option to acquire a 100% interest in the Rouyn property, and a major drilling program is underway. Two of the four deposits, Astoria and Augmitto, benefit from substantial underground infrastructure and have been the subject of technical reports that include resource estimates and that were filed in accordance with Regulation 43-101. In 2015, the Company expanded its exploration property portfolio by acquiring strategic base metal properties in prospective areas of the Abitibi Belt of Quebec that feature infrastructure favourable for mining development. The newly acquired base metal properties include the Scott Project in Chibougamau, which bears important mineral resources (see the press release dated March 30, 2017) and on which a positive Preliminary Economic Assessment was recently completed.