The Brett epithermal gold property covers 20,000 hectares and 17 mineral occurrences located 30 kilometres west of Vernon, in southern B.C.   Drilling at the Brett project has been delayed due to the effects of last year’s wildfire.  The program for 2022 will now include a drone-based airborne magnetic survey and a helicopter LIDAR survey.  These new surveys are being done to provide base information for exploring extensions to the Main and parallel zones. 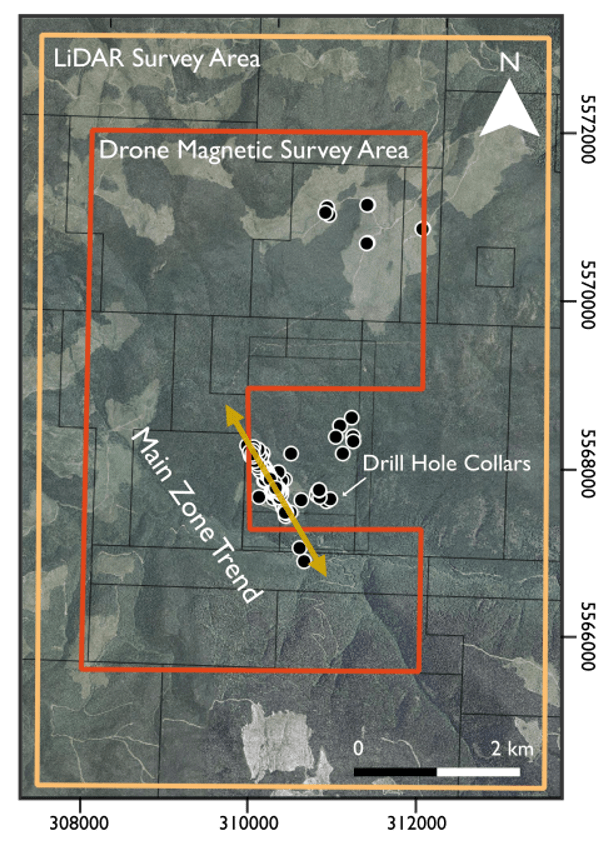 The magnetic survey will include 487 line-km to be flown at 50m spaced flight lines using a DRONE-MAG system, which consists of a multi-rotor UAV platform with a GSMP-35U potassium vapor magnetometer magnetometer, and GSM-19 Over Hauser base stations.

The LIDAR survey will consist of 54 km² of lidar and orthophoto data to be collected with a Phoenix Ranger Lidar scanner via a manned helicopter.

The magnetic results will be used to map the distribution of rock types beneath cover and identify possible de-magnetized zones associated with mineralization.  The LIDAR will be used for lineament analysis and as a detailed topographic base.