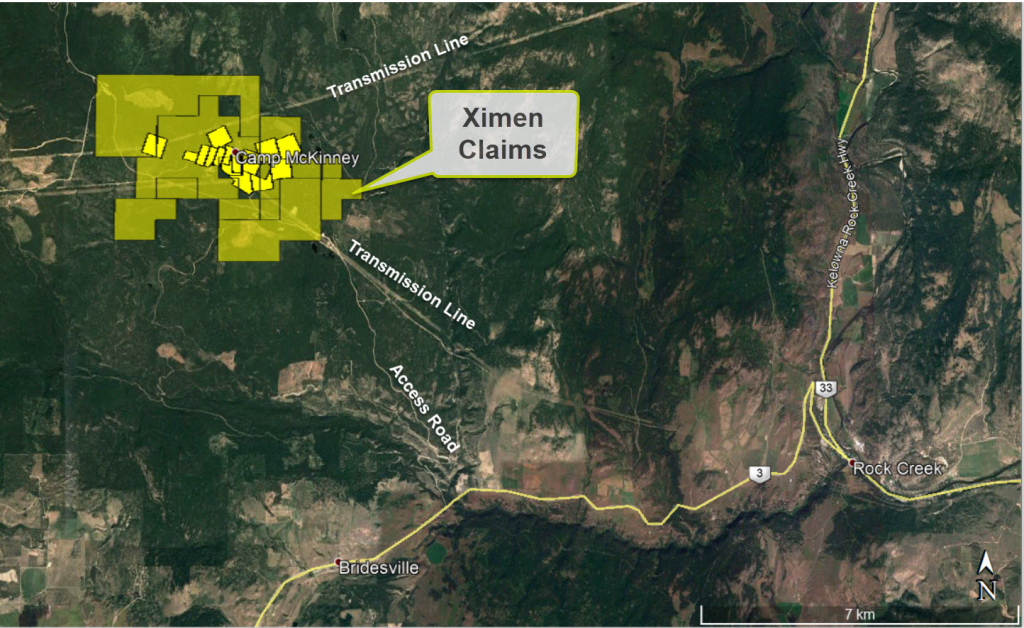 The new acquisitions include 9 mineral tenure claims acquired from Turnagain Resources Inc. for a cash sum of Thirty Three Thousand, plus one new mineral claim staked by Ximen. The area covered by these new claims is 1522 hectares, bringing the total area claimed by the Company in the McKinney Camp to 1718 hectares. The newly acquired properties cover gold-quartz vein, polymetallic silver lead zinc (gold) vein and porphyry molybdenum type mineral occurrences, including possible extensions of the Cariboo-Amelia vein system.

Earlier this year, the Company acquired 15 Crown-granted mineral claims covering the historic Cariboo-Amelia gold mine and other mineral occurrences (see news release dated June 4, 2019). The Cariboo-Amelia was British Columbia’s first dividend-paying lode gold mine and the mine produced 81,602 ounces of gold, 32,439 ounces of silver, 113,302 pounds of lead and 198,140 pounds of zinc during intermittent operations between 1894 and 1962. The average recovered gold grade was 24.68 grams per tonne gold (from BC Minfile).

The main quartz vein has a surface trace of 2.4 kilometres along strike. It was mined over a strike length of 754 metres and to a depth of between 107 and 171 metres. The width of the vein varies from 0.25 to 3.5 metres. It is composed of white quartz and pyrite with lesser sphalerite, galena, chalcopyrite and rare tetrahedrite and pyrrhotite. Visible native gold is locally prominent and higher gold grades are reported to occur where the vein hosts bands of sulphides including sphalerite and galena.

Priority targets for exploration on the Company’s new land package in Camp McKinney include potential extension of gold mineralization at depth below the historic mine workings, strike extensions in fault offset segments along strike, parallel veins, and possible porphyry related molybdenum-copper mineralization.

The company further announces that as per the news release of July 11 2019, Ms Sophy Cesar commences her IR services today July 15th for a monthly cash sum which is a lessor amount of $8000 / month, for a term of one year and she is also granted one hundred thousand stock options at an exercise price of 75 cents.

Ximen Mining Corp. owns 100 percent interest in all three of its precious metal projects located in southern BC. Ximen`s two Gold projects are The Gold Drop Project and The Brett Epithermal Gold Project. Ximen also owns the Treasure Mountain Silver Project adjacent to the past-producing Huldra Silver Mine. Currently both the Gold Drop Project and the Treasure Mountain Silver Project are under option agreements. The option partners are making annual staged cash and stocks payments as well as funding the development of these projects. The company has recently acquired control of the Kenville Gold mine near Nelson British Columbia and The Amelia Gold Mine in the center of the McKinney Gold Camp