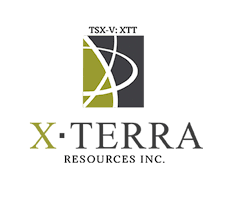 X-Terra Resources Inc. (TSX-V: XTT) (FRANKFURT: XTR) is pleased to announce it has received metallurgical and drill results from its Rim vein target, located near Saint Quentin, Restigouche County, New Brunswick. The inaugural drill program over this target has successfully identified a 9.5-metre cluster or stockwork of gold bearing veins at 50 metres under the RIM surface vein showing. In addition, the bench scale bulk sample and metallurgical recovery test done on 129 kilograms of the vein material at surface returned an average grade of 79 g/t Au and a concentrate grade of 35,317 g/t Au generated by the vibrating table.

The drill program consisted of 472.5 metres over four holes to test a 400 metre section of isolated gold bearing anomalies. This included the Rim vein surface discovery, where two holes, RIM-20-03 and RIM-20-04, targeted the Rim vein structure at depth and intersected multiple quartz veins in succession ranging from 10 cm to 1 metre in width. The veins all exhibited crack and seal and breccia with thicknesses varying from a few millimetres to 0.5 metre inside a stockwork style structure. The gold results are closely associated with fine disseminated sulphides along with stylolites throughout the quartz veins. Hole RIM-20-02 located about 200 metres northwest of the Rim vein also intersected a group of quartz veins and stockworks over the last 20 metres of the hole at a depth of 80 metres.

It is important to note that while the metallurgical results highlighted an average grade of 79 g/t Au over 129 kilograms of only Rim vein material and not any newly identified gold bearing veins, NQ drill core recovered a much smaller amount of material for assay, thus highlighting the possibility that continued drilling along this newly identified structure has the potential to result in increased gold grades.

At surface, the Rim vein is a unique outcropping panel plunging 45 to 60 degrees towards the west and is exposed for about 150 metres and varies in thickness from 15 centimetres to 1.5 metres. No other gold bearing quartz veins identified via drilling are exposed at surface, making the Rim vein target unique. The structure is interpreted to be related to a parasitic fold hinge of kilometric influence trending north which has been identified via the regional magnetic survey. This north-east structure flank was cross-cut by drilling where quartz veining and gold values are associated with a siltstone-sandstone contact. It is noteworthy that the largest part of the fold hinge is located approximately 500 metres north of the drill area which is not outcropping and has never been subjected to any type of exploration. X-Terra plans to follow up in this area as soon as possible.

This is an important step forward for the Rim vein target, as it remains open in all directions and only four drill holes have been completed on this target to date. X-Terra is now looking forward to expanding the work and drilling program at Rim very early in 2021 to test the siltstone/sandstone contact, which appears to be controlling the gold mineralization as well as the dominant fold hinge located 500 metres north of this area.

X-Terra is currently awaiting the drill results from the Grog target, which are expected shortly.

In addition, X-Terra has begun to receive portions of its geochemical results, MMI and Humus from its Troilus East property which will be used to determine the next phase of work, that being the IP ground geophysics which will be used to establish the properties first-ever drill targets. These results will be published once the information is compiled by X-Terra’s technical team.

Jeannot Théberge, P. Geo registered in the Provinces of Québec and New-Brunswick, a consultant to X-Terra Resources and a qualified person under National Instrument 43–101 Standards of Disclosure for Mineral Projects, has reviewed the technical contents of this news release and has approved the disclosure of the technical information contained herein. Robert Gagnon, P. Geo, president of ExploLab completed the Metallurgical test.

X-Terra Resources is a resource company focused on acquiring and exploring precious metals properties in Canada.