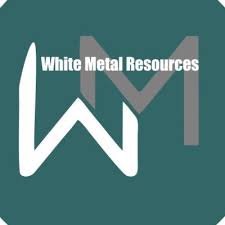 White Metal Resources Corp. (TSX-V: WHM) (FSE: CGK1) (OTC Pink: TNMLF) is pleased to announce the results of the remaining seven diamond drill holes from the Phase 2 drilling program at its flagship Tower Stock Gold Project. The drilling program was very successful in delineating several new gold zones that the Company will be following-up on in the coming weeks with a Phase 3 drilling program. The Company is also in the process of completing a trenching and sampling program on the H Zone, the K Zone, Papa Zone, and the A Zone. Sampling and mapping of these zones will be completed shortly with all samples being submitted to Activation Labs in Thunder Bay. The Phase 2 drilling program totalled 3,760 m in 18 drill holes (TM-21-98 to 116) with 11 drill holes reported to date.

Michael Stares, President and CEO of White Metal, commented, “The Company has been working on the Tower Stock Gold Project for just over one year and has clearly demonstrated the extensive gold system that is present on the Property. We have completed over 7,000 m of drilling, made several new discoveries, and have expanded known zones of gold mineralization. Prospecting and mapping have also proven quite successful with the discovery of the Star Zone, the C & M Zone and the Papa Zone. I am excited to start the Phase 3 drilling program as we are now beginning to understand the structure and controls on gold mineralization. We still have a lot of work to do but we are moving in the right direction in advancing the Project.”

*drill hole intervals are not true widths and are being reported as drill core lengths.

*drill hole intervals are not true widths and are being reported as drill core lengths.

TM-21-108: designed to test for the east extension of the main A Zone horizon (Figure 1). Successful in intersecting the A Zone, returning 23.8 m grading 3.94 g/t Au (from surface 3.7 m), including 7.5 m grading 8.77 g/t Au (from 8.0 m). Although the A Zone was previously worked by Inco Limited and Noranda Exploration Inc., only sparse work and data was reported.

TM-21-110: designed to test a high-priority DasVision 3D-IP chargeability anomaly, approximately 250 m southeast of the southern extent of the Bench Zone (Figure 1), resulted in the discovery of a new gold zone. The entire length of the hole (143.0 m) returned anomalous gold (average 0.44 g/t Au) with the main part of the zone returning 52.0 m grading 0.75 g/t Au (from 2.5 m), including 7.5 m grading 1.02 g/t Au (from 47.0 m). It should be noted that the style of mineralization in the 110 Zone is unlike any mineralization found on the Property to-date in that it is wholly-hosted within an intrusive monzonite body with less than 1% pyrite and trace chalcopyrite in quartz-carbonate fractures. 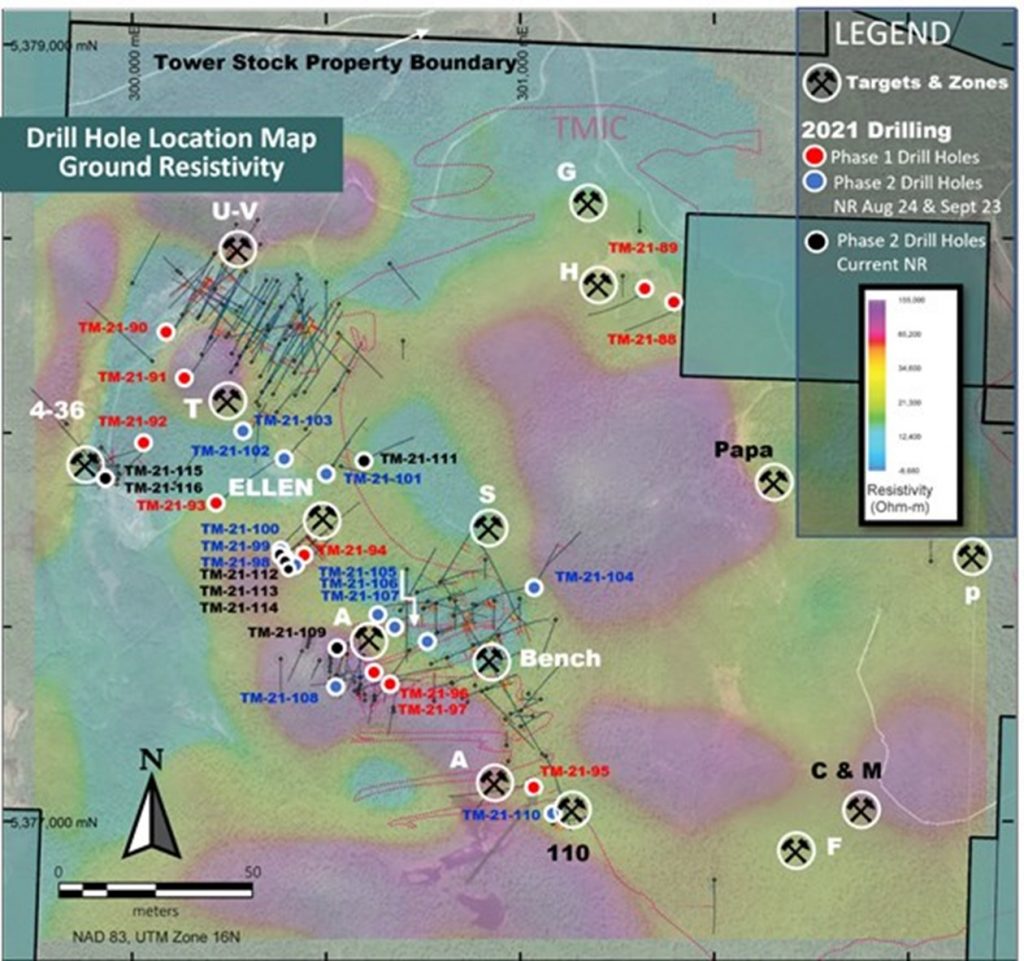 Located 720 m east of the 110 Zone discovery area, two surface samples from this newly-discovered zone, returned 2.33 g/t and 5.27 g/t Au (Figure 2). This zone is hosted within fractured monzonite with less than 1% pyrite and trace chalcopyrite. Its similarity with the 110 Zone suggests a significant l target region, interpreted to be up to 800 m across. The area has very poor exposure with about 95% overburden.

Located 600 m to the west of the 4-36 Zone, in a previously unmapped area, this newly-discovered zone hosts widespread gold mineralization with anomalous gold concentrations ranging from 86 ppb to 2.8 g/t Au over a minimum strike length of 400 m and up to 100 m wide (Figure 2). Mineralization is hosted within an extensive zone of felsic pyroclastic volcanic rocks exhibiting extensive and pervasive hydrothermal alteration plus well-developed fracturing and deformation. This area of widespread anomalous gold mineralization shares similarities with the 04-36 Zone and if connected presents an exploration target with as much as 600 m of strike length.

Located about 700 m northeast of the eastern edge of the Bench Zone, two rock grab samples, taken over a 10-square-metre area, assayed 3.05 g/t and 2.94 g/t Au (Figure 2). This zone is hosted within fractured monzonite with 1%-3% pyrite and located in an area largely covered by overburden. The Company is currently trenching this area to get a better understanding of the extent and controls on gold mineralization. 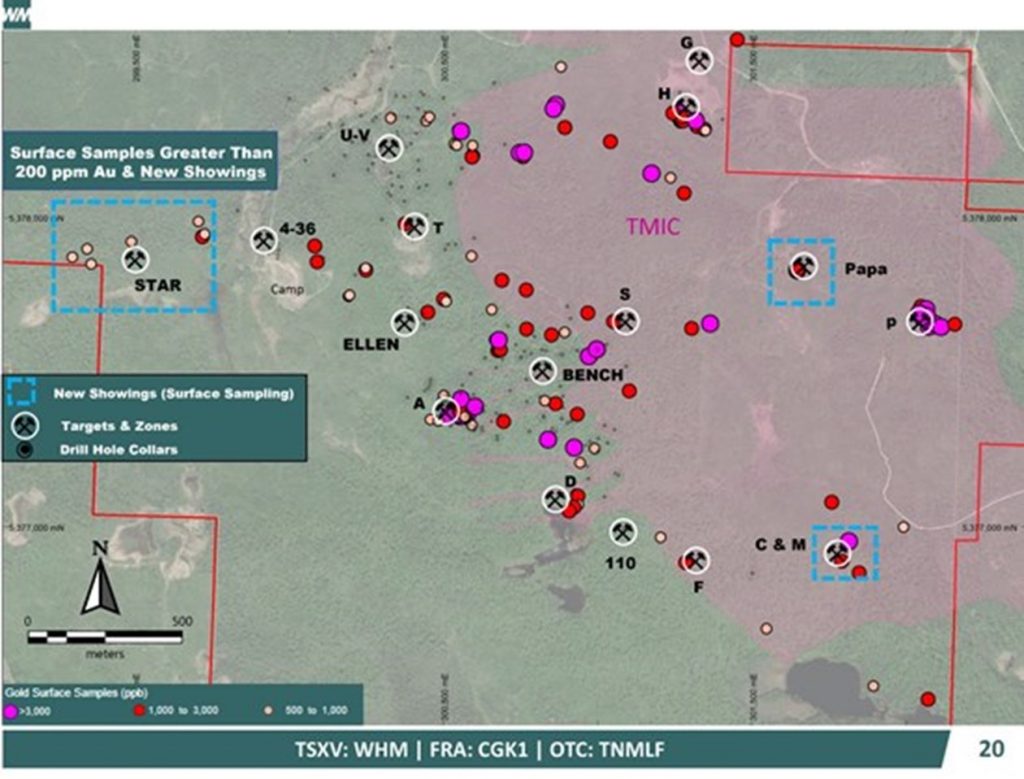 The Phase 3 drilling program will focus on:

Trench mapping and sampling will help to guide drill holes that are planned to test:

A Qualified Person, as described by NI 43-101, has not done sufficient work to verify the historical assay results and technical information reported herein. Rock grab samples are selective samples by nature and as such are not necessarily representative of mineralization hosted across the Property.

Company QA/QC standards and blanks were inserted into the sample stream for all sample types (surface rock grab samples and half drill core samples) and submitted for analysis by Activation Laboratories Ltd. in Thunder Bay, Ontario. Samples were transported under the direct supervision of senior White Metal personnel and delivered from the Property to the laboratory receiving facilities. Samples were analyzed for Au by Fire Assay with an AA finish and Au – Fire Assay with Gravimetric finish. Actlabs is an independent commercial laboratory that is ISO 9001 certified and ISO 17025 accredited.

Technical information in this news release has been reviewed and approved by Dr. Scott Jobin-Bevans (P.Geo.), Vice President Exploration and a Director of White Metal, who is a Qualified Person under the definitions established by NI 43-101.