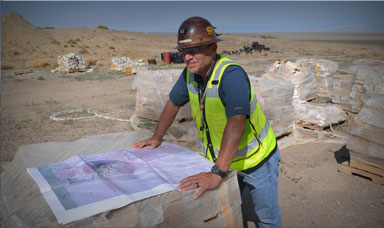 West Kirkland Mining Inc. (TSX-V:WKM) is pleased to announce that the US Bureau of Land Management has decided to review the company’s Three Hills Mine Plan of Operations under an Environmental Assessment. Achieving a permit to construct a mine under an EA typically takes less than a year.

The BLM confirmed this decision in writing on May 7, 2015 following the recent National Environmental Policy Act kick-off meeting held in Tonopah, Nevada. This decision allows the mine plan and timeline for the Three Hills and Hasbrouck gold deposits to be finalized in the prefeasibility study being produced by independent engineers Mine Development Associates. The prefeasibility study will model the timeline for the permitting and development of the Three Hills mine first. While Three Hills is producing, a separate permitting and development program for the larger Hasbrouck mine will be planned.

Three Hills qualified under an EA because of its small footprint of less than a square mile and the absence of “significant impacts” as determined by the BLM. An EA is a significantly faster and less costly process than an Environmental Impact Statement. West Kirkland plans to operate the Three Hills mine for at least two years, allowing time to permit and build the Hasbrouck mine. Hasbrouck’s capital costs are projected to be significantly funded by cash flow from Three Hills.

Permitting work at Hasbrouck under an EIS may begin as early as Q3, 2015. West Kirkland expects to announce the result of a prefeasibility study of the Hasbrouck Project, encompassing the operation of both mines, to be produced by MDA, in May 2015.

The EA process will identify environmental impacts, if any, that the project might have on the environment, together with appropriate mitigation measures. Once the EA is complete, a Finding of No Significant Impact and a Decision Record can be issued by the BLM, effectively permitting the project to proceed to construction.

About the Hasbrouck Project

Located near Tonopah, Nevada, the Hasbrouck Project consists of two oxidized gold-silver deposits eight kilometers from each other, Three Hills and Hasbrouck. West Kirkland has a 75% controlling interest in the project and a large mineral rights position near Tonopah, Nevada. West Kirkland has the option to make an offer for the remaining 25% interest.

West Kirkland was formed in 2010 to focus on gold exploration along major geological trends in North America. The Company has consolidated significant mineral rights positions within the known gold trends of Nevada and Utah, including the Hasbrouck and Three Hills properties in southern Nevada. The founders, management and Board members of West Kirkland have successful and extensive experience in gold discovery, mine development and mine operations in Nevada, and other gold producing jurisdictions in North America and globally.