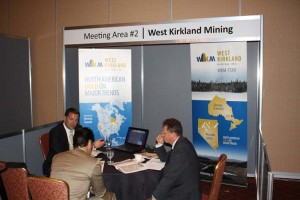 West Kirkland Mining Inc. (TSX-V:WKM) announces today that it has completed a thorough project plan on its recently acquired Hasbrouck and Three Hills properties and will immediately start exploration and initiate a prefeasibility study.

West Kirkland recently raised $33.1 million in related financings and acquired a 75% interest in the Hasbrouck Project for a purchase price of US$20 million. Following the announcement of the Hasbrouck Project acquisition agreement in January, 2014, West Kirkland announced a mineral resource estimate increase of approximately 10%, which incorporated the results of subsequent drilling completed since the most recent mineral resource estimate disclosed in 2012 by the property vendor and the completion of a technical report dated February 21, 2014 titled “Technical Report for the Hasbrouck Project Esmeralda County, Nevada, USA, West Kirkland Mining Inc.” authored by Scott E. Wilson, C.P.G., which has been filed under the Company profile on SEDAR at www.sedar.com.

The Company has previously stated that in keeping with the recommendations of the Technical Report, it would complete a preliminary economic assessment of the Hasbrouck Project. However, the Company has recently completed a detailed review of the three dimensional deposit models, incorporating the recent mineral resource estimate increase referred to above, and conducted internal engineering, planning and interaction with the community and permit regulatory bodies, and now has sufficient confidence to proceed directly to the prefeasibility stage on the Three Hills and Hasbrouck surface oxide gold deposits.

The Hasbrouck Project includes two all-oxide deposits with at-surface and near-surface mineralization having minimal pre-strip and a low overall stripping ratio. Both deposits are well-drilled with over 600 bore holes. In addition, extensive metallurgical test work has been done indicating approximately 60% recovery at Hasbrouck and 80% recovery at Three Hills by heap leaching with moderate cyanide and lime consumption.

Both deposits have easy access from the state highway system and grid power is available nearby. The deposits are above the water table which simplifies operations, permitting and closure. The expected project approach to the Prefeasibility Study will be to look at two open pits with low-strip ratios and no pre-strips with heap leach extraction. The initial design concepts will focus on an initial operation at Three-Hills with a lower scale and environmental profile. The second phase of the design concept will then focus on Hasbrouck which has a longer potential permit time line. Initial feedback on this two-staged approach from local interests and state and federal regulators has been positive.

The new deposit model completed and announced by WKM has provided obvious exploration targets, including targets immediately adjacent to the Three Hills deposit and the Hasbrouck deposit. A 2,000 meter drilling program is expected to commence in July, 2014. The drilling program will involve resource infill, and step-outs, groundwater characterization, metallurgical samples, condemnation holes for infrastructure areas, water source and geotechnical studies.

West Kirkland intends to complete the Prefeasibility Study by Q1 of 2015 using a team of leading, Nevada-based consultants, including:

Exploration drilling will be completed by reverse circulation methods and be focused primarily on areas immediately adjacent to the Three Hills and Hasbrouck deposits on specific mapped and modelled structures associated with the control of mineralization.

Pre-application meetings with the Bureau of Land Management (BLM) and the Nevada Division of Environmental Protection have commenced the formal permitting process. Surveys required by the BLM include sensitive species and cultural resources and are currently being conducted. Rock characterization studies are required by NDEP for a Water Pollution Control Permit. Permitting work will initially focus on the Three Hills deposit which has a small footprint and short life of mine (approximately two years). These factors may result in a simpler and shorter permitting process.

The Prefeasibility Study, engineering drilling, permitting work and the immediate exploration program is budgeted to cost $5 million, in line with previous plans and milestones.


West Kirkland was formed in 2010 to focus on gold exploration along major geological trends in North America. The Company has consolidated significant mineral rights positions within the known gold trends of Nevada and Utah, including the recently acquired the Hasbrouck and Three Hills properties in southwestern Nevada. The founders and Board members of West Kirkland have successful experience in gold discovery, mine development and mine operations in Nevada and other gold producing jurisdictions in North America.