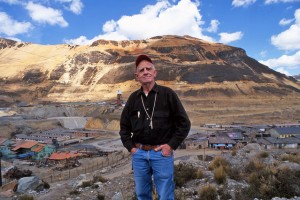 As part of the RTO, the Company changed its name to “Lowell Copper Ltd.”. The Company anticipates that its common shares will commence trading on a post-consolidation basis on the TSX Venture Exchange (“TSXV”) on or about Monday, July 15, 2013 under the stock symbol “JDL”.

Lowell Copper Inc. was founded by its President and CEO, J. David Lowell, who is regarded as one of the world’s most successful geologists, with a career that includes the discovery of over 15 large scale mine discoveries, including La Escondida, the world’s largest copper mine. The previous two public companies founded by Mr. Lowell were Arequipa Resources Ltd. (acquired by Barrick Gold for approximately $1.1 billion) and Peru Copper Inc. (acquired by Aluminum Corporation of China or CHINALCO for $850 million).

Marcel de Groot, Chief Executive Officer of Waterloo commented, “We are pleased to have completed these transactions and to be a part of J. David Lowell’s and his team’s third entry into the Canadian public markets. We look forward to participating in David Lowell’s continued success in creating value in the public markets.”

26,034,078 of the 42,857,143 Shares issued as part of the RTO are subject to an escrow agreement among the Company, Computershare Investor Services Inc. and certain securityholders of the Company (the “Escrow Agreement”). In addition, convertible securities held by such securityholders are also subject to the Escrow Agreement. Such escrow securities shall be released from escrow over a period of five (5) years, such that 10% of the escrowed securities will be released in tranches every six months following the date of the final TSXV bulletin. Such escrow restrictions will remain in effect unless certain conditions are met, as more particularly described in the Joint Supplement of the Company and Lowell Copper Inc. dated April 15, 2013.

Additions to the Board of Directors

Mr. Lowell has been appointed as the Chairman, CEO and a director of the Company. The Company also welcomes the addition of David De Witt and Catherine McLeod-Seltzer to the Company’s Board of Directors.

Each Unit is comprised of one Share and one-half of one common share purchase warrant. Each Warrant will entitle the holder thereof to acquire one additional Share until July 9, 2018 at a price of $0.72. The Shares, Warrants and any Shares issued upon the exercise of the Warrants are subject to a hold period and may not be traded until November 10, 2013. 1,687,000 Shares and 843,500 Warrants issued under the Offering are subject to the Escrow Agreement.

Tempest Capital received a cash commission of $122,296.50, representing 5% of the gross proceeds of the Brokered Offering. The Company paid an aggregate of $33,962.92 in finders’ fees as consideration for certain finders introducing purchasers to the Company.

It is anticipated that the net proceeds from the Offering will be used by the Company to further the exploration of its mineral properties and for general working capital purposes.

Shannon Shaw and Gregory Smith, directors of the Company, participated in the Offering by purchasing an aggregate of 87,000 Units for gross proceeds of $46,980. Their participation in the Offering constitutes a “related party transaction” as defined in Multilateral Instrument 61-101 (“61-101”). The Offering is exempt from the formal valuation and minority shareholder approval requirements of MI 61-101 as neither the fair market value of the Units issued to, nor the consideration paid by, the related parties exceeded 25% of the Company’s market capitalization.

The Company did not file a material change report more than 21 days before the expected closing of the Offering as the details of the financing and the participation by the related parties were not settled until shortly prior to closing and the Company wished to close the Offering on an expedited basis for sound business reasons.