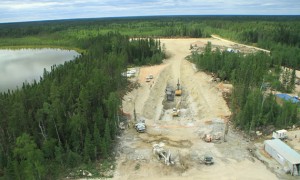 VMS Ventures Inc. (TSX-V:VMS) is pleased to update shareholders on the progress made in the month of April at the Reed Copper Project, near Flin Flon, Manitoba. VMS Ventures owns 30% of the project and is carried to production. HudBay Minerals Inc. (TSX:HBM)(NYSE:HBM) owns 70% and is the Operator.

Considerable progress was made at the Reed Copper Project in the month of April, including:

The focus during the month of May is the continued development of the underground ramp and the vent raise, along with ongoing construction activities.

COO Neil Richardson states: “We were pleased with the improvements to the advance rates of the ramp and ventilation raise during the month of April, which are key components to the Reed project’s development. Reed continues to develop as planned and remains on budget. It is noteworthy to mention that mine and camp construction have now proceeded for 412 days with no lost time accidents”.

On May 1, 2013, Hudbay reported that approximately $37 million of the $72 million capital construction budget for the project has been invested as of the end of the first quarter of 2013 with an additional $13 million committed as of that date.

VMS Ventures Inc. is focused primarily on acquiring, exploring and developing copper-zinc-gold-silver massive sulphide deposits in the Flin Flon-Snow Lake VMS Belt of Manitoba. The Company’s VMS project property portfolio consists of the Reed Copper Project, which is subject to a 70-30 JV with HudBay Minerals and, subject to receipt of required permits, is scheduled for production in Q4-2013, Copper Project, McClarty Lake Project, Sails Lake Project, Puella Bay Project and Morton Lake Project. Outside of the Snow Lake camp, the Company holds massive sulphide prospective properties near the past producing Fox Lake and Ruttan copper-zinc mines, near the communities of Lynn Lake and Leaf Rapids in northern Manitoba. These properties are located in the mining friendly province of Manitoba, Canada. The Company also has optioned two properties in the Sudbury mining camp. They are Terra Incognita and Black Creek.