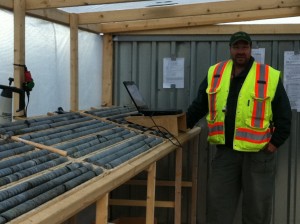 “North American Nickel Inc. is pleased to announce that the deepest sulphide intersection to date at Imiak Hill has returned high-grade nickel-copper-cobalt assays demonstrating that the mineralization has continuity and remains open at depth. Imiak Hill is one of three mineralized norites comprising the Imiak Hill Conduit Complex (IHCC), which also includes the Imiak North and Spotty Hill norites.

The IHCC is located in the northern part of the Company’s 100% owned Maniitsoq Nickel – Copper – Cobalt and PGM project in southwest Greenland (figures 1 and 2).

The mineralization in MQ-13-028 corresponds to Zone 30, one of three mineralized zones so far discovered in the Imiak Hill norite

As can be seen from the longitudinal section in Figure 4 and cross section in Figure 5, the mineralization in MQ-13-028 occurs 35 to 75 meters down plunge from previous high-grade intersections in holes MQ-13-026 (25.51m grading 3.25% nickel, 0.48% copper and 0.11% cobalt) and MQ-13-024 (14.90m grading 2.67% nickel, 0.39% copper and 0.09% cobalt). The Company’s 2013 drilling, and corresponding assay results, confirm that the sulphide mineralization at Imiak Hill is high-grade, has continuity and remains open at depth. The company is awaiting further assays from other prospects at Maniitsoq.

NAN COO, Neil Richardson, states: “Hole 28’s high grade core contains similar values to hole 26 which support our magma conduit model of high grade nickel-copper-cobalt mineralization at Imiak Hill. We were interested to see the much higher copper grade in hole 28, reflected in more chalcopyrite in the near solid sulphide mineralization we reported earlier this fall. At 180 meters vertically below surface MQ-13-028 is the deepest intersection to date at Imiak. It has a true width of approximately 11.2 meters, and importantly, remains open at depth.”

Richardson continues: “The 2014 drill program will focus on expanding the known mineralized zones and exploring for additional mineralization within the IHCC. Specifically, we will be looking for geological environments suitable for the accumulation of large quantities of nickel-copper-cobalt sulphide mineralization. Our main targets will be the footwall contacts of the norite bodies, embayments along these contacts and other parts of the conduit system where the velocity of nickel-rich norite magma may have been locally reduced. Also, the possibility that mineralization may extend beyond the norite bodies into the surrounding country rocks will be tested.”

As in previous holes drilled at Imiak Hill, the mineralization in MQ-13-028 is hosted within dark green-grey, massive, weakly magnetic norite with occasional clasts of coarser grained norite.

Drill core assay results are evaluated as part of a Quality Assurance and Quality Control procedure that includes the use of multi-element, certified standards with known precious and base metal values, blank standards and control charts to determine accuracy and precision of analytical results. Core sample analysis was completed by ALS Scandinavia AS of Ojebyn, Sweden. Three methods of analysis were used to determine element concentrations in the rock samples submitted to ALS. These were 1. A multi-element scan, subsequent to a four-acid digestion and ICP/ICP-AES finish; 2. Au, Pt and Pd lead fire assay on a 30 gram sample with ICP-AES finish; and 3. Samples with greater than 1.00% Ni or Cu were re-analyzed by ICP-AES calibrated for ore grade detection limits. Samples with greater than 0.50% S were re-analyzed by Leco furnace and infrared spectroscopy.

All technical information in this release has been reviewed by Dr. Mark Fedikow, P.Geo, who is the Qualified Person for the Company and President, North American Nickel Inc.”

VMS Ventures Inc. is focused primarily on acquiring, exploring and developing copper-zinc-gold-silver massive sulphide deposits in the Flin Flon-Snow Lake VMS Belt of Manitoba. The Company’s VMS project property portfolio consists of the Reed Copper Project, which is subject to a 70-30 JV with HudBay Minerals and, subject to receipt of required permits, is scheduled for production in Q4-2013, Copper Project, McClarty Lake Project, Sails Lake Project, Puella Bay Project and Morton Lake Project. Outside of the Snow Lake camp, the Company holds massive sulphide prospective properties near the past producing Fox Lake and Ruttan copper-zinc mines, near the communities of Lynn Lake and Leaf Rapids in northern Manitoba. These properties are located in the mining friendly province of Manitoba, Canada. The Company also has optioned the Black Creek property in the Sudbury mining camp.