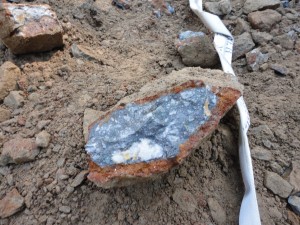 GREAT ATLANTIC RESOURCES CORP. (TSXV.GR) is pleased to announce that it has commenced a VLF-EM/magnetometer survey over the Porcupine base metal-silver project.  The purpose of this survey is to outline mineralized structures in addition to those discovered during last fall’s trenching program at Porcupine.  The trenches were established on coincident IP/base metal soil geochemistry targets and during the course of this work it was evident that the massive Pb/Zn (Lead/Zinc) vein mineralization and the IP anomalies were occupying two separate but intersecting structures.  The VLF-EM work will be conducted with a VLF base station with readings taken using several frequencies in order to best delineate the mineralized structures from the non-mineralized structures.  Several untested soil geochemical anomalies exist to the north and west of the discovery area and if a geophysical signature indicative of the base metal filled structures is found to be coincident with the untested soil anomalies, then these targets will be considered as prime areas for further trenching or diamond drilling.

Great Atlantic currently holds a 100% interest in the property and is seeking partners to continue to develop the property.  Approximately $300,000 in exploration has been spent in the last two years which has defined drill ready targets.  If interested, please call Christopher Anderson at 604 488-3900.

The trenching program on the Porcupine North base metal and silver block has been completed and a mineralized zone has been exposed in the Line 4W trench.  The maximum observed zone width is 4.5 meters and within a few meters along strike this narrows to 1.5 meters.

A total of three channel samples were taken from the shear zone and sent to Activation Laboratories, Ancaster, ON and the rocks were run by ICP/OES following a four acid digestion. (inductively coupled plasma/optical emission spectroscopy). The narrow portion of the shear zone returned 11.1g/t Ag, 0.16% Cu, 0.88% Pb and 1.88% Zn/1.4 meters.  The wider portion of the zone, approximately 10 meters east along strike returned 7.86 g/t Ag, 0.23% Cu, 0.67% Pb, 0.75% Zn over 4.6 meters.  Of note is that during the course of stripping this zone, abundant large boulders of sheared felsic volcanics were seen to occur at the contact of the till and the bedrock surface within a lodgement till phase.  While these boulders are visually similar to those uncovered in the trenching, geochemically they are quite different – particularly in their Bismuth (Bi) content.  The bedrock sampling showed the exposed zone to contain 10 – 20 ppm Bi whereas the “float” samples contain between 130 and 210 ppm Bi, indicating a similar but separate source for the float material.  Assays of two of the Bi enriched boulders, announced in a news release on August 29, 2012, returned 122 g/t Ag, 2.40% Cu, 20.7% Pb, 6.89% Zn and 58.7 g/t Ag, 0.94% Cu, 6.69% Pb and 1.52% Zn.  The occurrence of these mineralized boulders wedged into depressions in the bedrock surface initially led to the conclusion that the boulders were actually broken bedrock from the immediate area.  When the exposure was washed and the till more closely examined, it became apparent that the more strongly mineralized float was carried by the ice from a location to the west.

A summary of the channel samples is listed below;