Vizsla Resources Corp. (TSX-V: VZLA) (OTCQB: VIZSF) (Frankfurt: 0G3) is pleased to announce a third new discovery with the Company’s first step-out drill results along the Napoleon Vein Corridor at the Panuco silver-gold project  in Mexico. A total of three holes have been completed to date at the Papayo Zone, located over one kilometre north of the initial Napoleon discovery with results from the first hole reported in this release.  The Papayo Zone has never previously been drilled and has high-grade outcropping samples along a jog in the vein similar to the initial Napoleon discovery.

Vizsla President and CEO, Michael Konnert, commented: “I am very pleased to announce that we have made a new, high-grade discovery a kilometre north from the original discovery at Napoleon. To have hit a high-grade discovery on the first hole at Papayo is a clear demonstration of the scale and potential of both the Napoleon Vein Corridor and the Panuco district. The Papayo zone has been defined over 90 metres of strike length in the current holes and drilling will continue to step-out to define the full extent of the mineralization, which is open in all directions. Vizsla is well-funded and we are rapidly progressing our exploration drilling program across the project with 3,175m completed in July and three of the four rigs now focused on new discoveries.”

The Papayo Zone was targeted as it has the same characteristics as the initial discovery at Napoleon with high grades sampled at surface, small scale mining and a northwest jog of the vein creating a dilation zone to host mineralization.

Mineralization is hosted in a wide complex fault zone hosted by andesite tuff.  The zone contains milled breccias within a clay matrix and narrower zones of clay gouge interspersed in larger zones of crackle brecciation.  The breccias show an early massive white quartz event that is cut by a later grey quartz veining event that entrains variable amounts of the white quartz clasts.

The veins in each hole have similar textures with the quartz breccia veins containing 3 to 5% fine grained disseminated pyrite as well as minor fine-grained galena, sphalerite and probable acanthite scattered across the interval.  The pyrite content is greater within the main vein in hole NP-20-19 than NP-20-18.

All three completed holes have intersected veining at approximately 80-110m below surface and the total distance is over 90m between hole NP-20-19 and NP-20-21.  The drilling plan is to continue expanding the footprint of mineralization to understand the size potential of the mineralized veins and the controls on vein widths and silver grades.

Table 1:  Downhole drill intersections from the holes completed at the Papayo Zone on the Napoleon Vein Corridor.

Vizsla has an option to acquire 100% of the newly-consolidated 9,386.5 Ha Panuco district in southern Sinaloa, Mexico, near the city of Mazatlán.  The option allows for the acquisition of over 75 km of total vein extent, a 500 tpd mill, 35 kms of underground mines, tailings facilities, roads, power and permits. 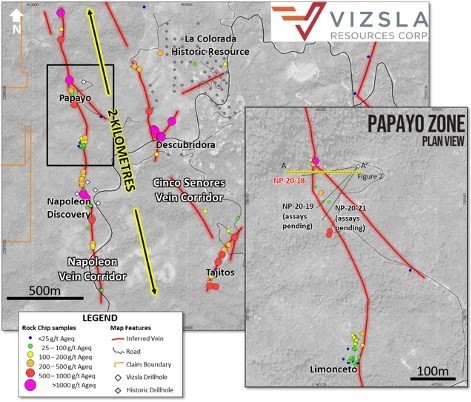 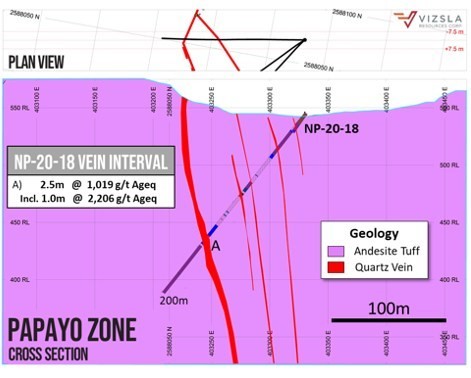