Vizsla President and CEO, Michael Konnert, commented: “Drilling at Papayo continues to deliver high grade results that expand the strike length to 300m and mineralization remains open in all directions.   The Company is rapidly expanding the early drill successes at Panuco to prioritise those with potential to host large volumes of mineralization and move on from smaller zones.  Expanding Papayo will remain a focus while the Company is moving away from San Carlos where very wide, but lower grade vein intervals have been intercepted to date.  This rig has commenced drilling new targets along the Cordon del Oro vein corridor.” 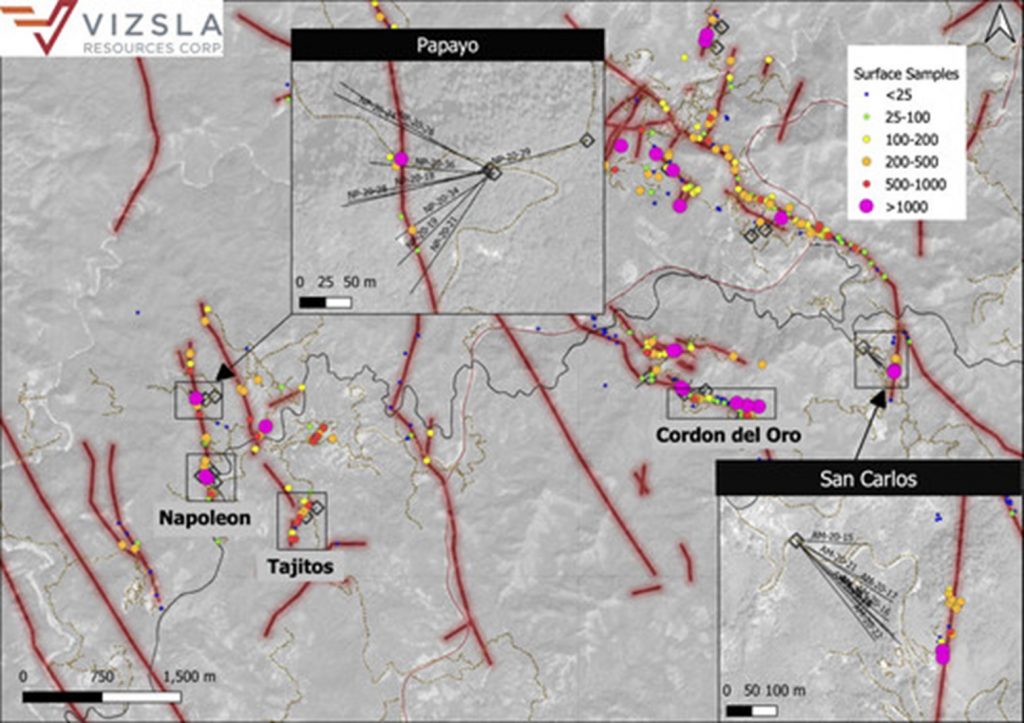 Drilling has continued to expand the known extents of mineralization at Papayo.  The Company is systematically stepping out from the better intercepts and the mineralization remains open.  Recent drilling has been expanding the vein below and on both sides of the discovery hole area and have identified and defined a second parallel vein of similar geology and grade. The drill program will continue to test the extents of the structure around the significant grade intersections in NP-20-19 and NP-20-21.

The Napoleon structure is hosted in weakly magnetic microdiorite and trends roughly north – south for over 2,000m of strike.  The structure hosts two main quartz veins that are separated by 10 to 20m, and dips steeply to the east.  Between the two main veins are a series of smaller splay veins with variable orientations, that are related to opening along the structure under strike slip movement.  The two main veins have a variable true width of 0.4 to 15.3 m and are usually hosted next to the main fault structure, though occasionally also occur outside of the fault.

The two main veins are multi-episodal quartz veins, with sections of massive white to grey quartz as well as local brecciation with clasts of grey quartz, white vein quartz and/or wallrock fragments.  The grey quartz is discoloured due to the presence of very fine-grained argentite.  A later breccia cuts these earlier phases that is grey quartz supporting polymictic clasts of grey and white quartz along with strong chlorite and fine to medium grained pyrite, sphalerite and galena.  Other smaller quartz veins have been cut in both the hanging wall and footwall that appear to be splays with less continuity. 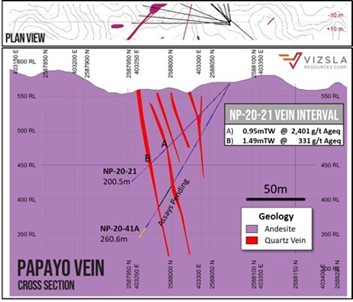 Table 1:           Downhole drill intersections from the holes completed at the Papayo. *Note NP-20-18 was previously reported and is repeated here with true widths

Drilling has continued around discovery hole AM-20-16 to expand the known mineralization. The San Carlos structure is wide lower grade bulk tonnage target with an average width of 11.5m and a range from 3.35m to 22.8m.

The San Carlos segment of the Animas Vein Corridor is a roughly north-south trending vein that dips approximately 50 degrees to the west.  This represents a significant change in orientation compared to the general northwest trend of the Animas corridor and is likely related to a north – south trending structure that offsets the main trend and localizes mineralization at San Carlos.  The geological sequence includes an intrusive diorite unit that structurally overlies an andesitic lapilli tuff unit.  The lower contact of the lapilli tuff appears to have been intruded by another diorite unit, and the entire package has been intruded by various andesite to rhyolite dikes.

The mineralized zone of San Carlos is bounded by faults, which typically have clay fault gouge and are themselves bounded by crackle breccia zones away from the mineralization.  The mineralized zone is commonly quite wide (up to 30m) and consists of white quartz hydrothermal breccias with variable amounts of host lithic clasts or locally re-brecciated quartz vein clasts.  Multiple pulses of veining have occurred with the best grade material having a grey quartz matrix supporting white or grey vein clasts that cuts the main white quartz breccia zone.  The grey quartz has very fine-grained argentite and fine-grained disseminated pyrite, while the white quartz material has lesser irregular amounts of both argentite and pyrite.  Locally there are patches with amethyst that is likely a later fracturing event.  Once past the footwall fault, there is a zone of decreasing crackle breccia with quartz fill giving way to calcite fill and with weak chlorite alteration of the host diorite or andesite.

Table 2:           Downhole drill intersections from the holes completed at the San Carlos. *Note; AM-20-16 was previously reported and is repeated here with true widths.