Vizsla President and CEO Michael Konnert commented: “As we rapidly approach the deadline for drilling to be incorporated into the maiden Panuco resource estimate, anticipated in Q1 2022, new results from the Napoleon Vein continue to demonstrate the exceptional size and grade of the underlying system.  Large step-outs have now expanded the zone’s greater mineralized footprint to over 1,800 metres along strike with a notable higher-grade precious metals rich subzone developing over 1,000 metres to the south and below the discovery hole. This near-surface high-grade subzone hosts multiple intercepts over 1,000 g/t AgEq and reamains open to the south and at depth “

Napoleon drilling continues to highlight one long continuous panel of mineralization, now traced over 1,820 metres of total strike length. A higher-grade footprint, developing to the south of discovery hole NP-20-07, is marked by multiple intercepts grading over 1,000 g/t AgEq. Newly reported holes within this area further emphasise a shallowly plunging panel of higher-grade mineralization dipping ~20o to the south.

The higher-grade footprint is a relatively wide, precious metals rich, subzone extending from the original discovery area to the south (Figure 2).  This near-surface higher-grade footprint has an average vein width of 3.9 metres with an uncut, undiliuted weighted average grade of 453 g/t AgEq (148 g/t silver, 2.90 g/t gold, 0.46% lead and 1.4% zinc).  The high-grade footprint currently spans ~1,000 metres along strike to an average depth of 400 metres. However, locally, mineralization has been traced down to 450 metres below surface marked by previously reported hole NP-21-189B.  Mineralization remains open to depth and to the south.

To the north of the original discovery area, towards Papayo, medium grade mineralization is observed to be relatively narrow compared to the higher-grade footprint (1.8 mTw vs 3.9 mTw), extending to the far north of Napoleon (Figure 1).  In total, the greater Napoleon Vein resource area, including the higher-grade footprint, now covers an area ~1,820 metres long by 300 meters deep with an average vein width of 3.36 metres and an uncut, undiltuted weighted average grade of 421 g/t AgEq (142 g/t silver, 2.62 g/t gold, 0.46% lead and 1.39% zinc). The greater Napoleon Vein ore density is estimated at 2.72 tonnes/cubic metre based from results of 49 samples analysed.

The newly consolidated Panuco silver-gold project is an emerging high-grade discovery located in southern Sinaloa, Mexico, near the city of Mazatlán. The 6,754.1-hectare, past producing district benefits from over 75 kilometres of total vein extent, a 500 ton per day mill, 35 kilometres of underground mines, tailings facilities, roads, power and permits.

Note: Two new claims have been acquired adding 149.9 hectares of new area. 4,103.5 hectares previously reported as part of the Panuco project have been removed from the total hectares due to 4 claims being located at a significant distance from the project. These hectares remain as 100% owned by Vizsla Silver. 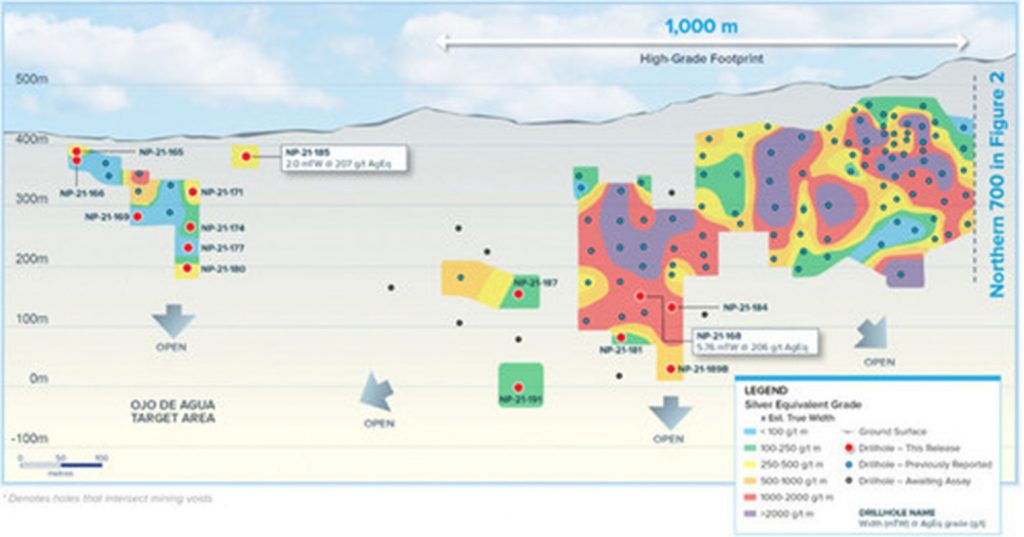 Longitudinal section from the southern half of the Napoleon prospect with all holes labelled and selected intersections shown. Scale bar identifies extent of the higher-grade panel of mineralization. (CNW Group/Vizsla Silver Corp.) 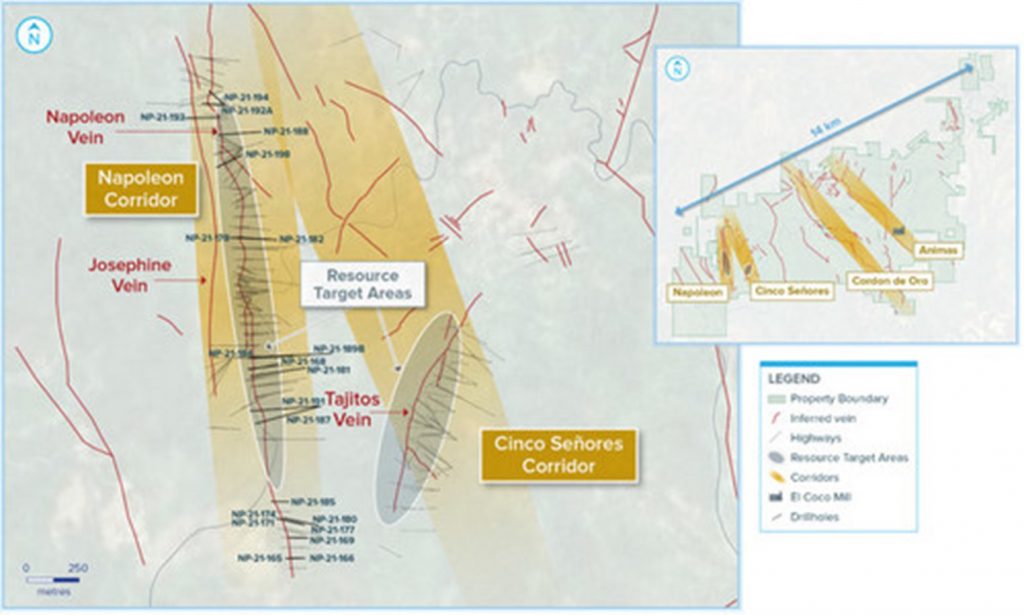