Vizsla expands Napoleon further towards surface, to depth and to the north at Panuco Project, Mexico

Vizsla expands Napoleon further towards surface, to depth and to the north at Panuco Project, Mexico

Vizsla Resources Corp. (TSX-V: VZLA) (OTCQB: VIZSF) (Frankfurt: 0G3) is pleased to provide results from ten new holes at the Napoleon prospect at the Panuco silver-gold project in Mexico.  These results continue to expand the discovery and it remains open to the north and beneath wide intercepts at depth.

Vizsla President and CEO, Michael Konnert, commented: “We continue to grow the area of mineralization at the Napoleon discovery in all directions with drilling. We are particularly encouraged with the wide zones remaining open in the deepest drilling.  The greater Napoleon corridor has significant potential, and the Company continues to expand both the Napoleon zone and the Papayo zone and is adding rigs to systematically explore the entire 2.7 kilometre long vein corridor. Vizsla is well-funded as it continues its aggressive exploration of the Panuco district.” 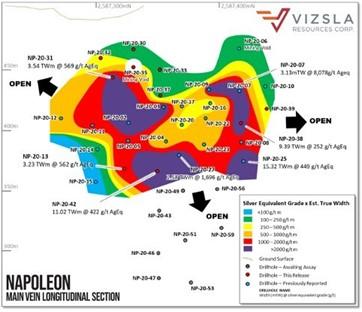 Figure 1: Longitudinal section from Napoleon prospect with all holes labelled and selected intersections shown. All figures including a plan map can be found at the Company’s website here www.vizsla.com.

Step-out holes have also been completed at the northern end of the zone and towards depth where mineralization remains open.

Deeper drilling is continuing at Napoleon as the Company seeks to define the extent of economic mineralization.  Assays remain outstanding for deeper holes and drilling has recommenced in 2021 with two rigs – one continuing the deeper drilling and another expanding the zone towards the north.

Table 1: Downhole drill intersections from the holes completed at the Napoleon Discovery.