Vizsla Resources Corp. (TSX-V: VZLA) (OTCQB: VIZSF) (Frankfurt: 0G3) is pleased to provide results from eight new holes at the Napoleon prospect at the Panuco silver-gold project in Mexico.  These results demonstrate high precious metals grades down to 320m below surface, a 180-metre step down from previously reported results.

Vizsla President and CEO, Michael Konnert, commented: “Intersecting over ten kilograms per tonne silver equivalent in such a large step-out significantly expands the size potential of the Napoleon shoot.  Mineralization remains open and recent drilling is confirming robust vein widths down plunge.  These very high grades of precious metals occur with massive sulphide within the veins at Napoleon, Papayo and Tajitos and the Company is trialling ground EM in mid-February to search for similar zones along the entire lengths of the Napoleon and Cinco Senores vein corridors.” 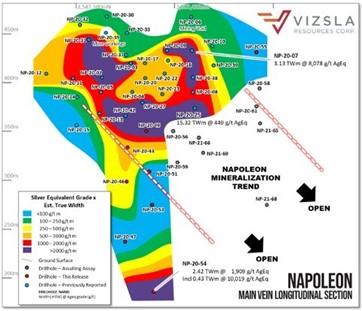 Figure 1: Longitudinal section from Napoleon prospect with all holes labelled and selected intersections shown.  All figures including a plan map can be found at the Company’s website here www.vizslaresources.com.

These recent results at Napoleon expands the mineralization by 170 metres vertically.  A wide vein continued beneath previously reported holes, however, a post mineral fault is interpreted to have impacted the vein in deeper holes (NP-20-47, NP-20-51, and NP-20-53). Hole NP-20-54 tested beneath this interpreted structure and returned a robust vein with very-high grades of mineralization.  At depth it appears the Napoleon shoot is dipping back towards the west.

Mineralization remains open to the south, north and at depth and drilling continues to define a strong plunge steeply to the north.  Holes NP-21-65, NP-21-69 and NP-21-68 confirm a competent vein continues down plunge and assays remain outstanding for these recently completed holes. 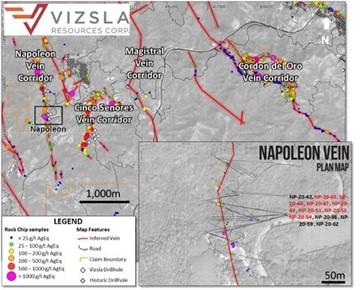 Intervals of massive sulphide associated with high grades of precious and base metals have been drilled at Napoleon, Papayo and Tajitos.  This mineralization is interpreted to represent a very fertile pulse in the formation of these veins.  The Company is commencing a trial ground electromagnetic (EM) survey in these three areas because if the bodies of massive sulphide are continuous, they may represent strong geophysical targets.  If the program is successful, the Company has a tool for the Napoleon and Cinco Senores zones to specifically target high-grade targets along the broader vein corridors.

The Company will also commence a detailed drone magnetic survey in February to improve mapping and vein interpretations.  Magnetic susceptibility measurements and historic data indicates veins form linear demagnetised corridors through the host rocks which the survey will map with high resolution.