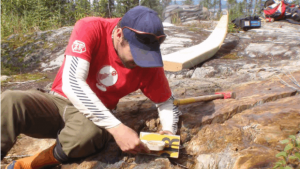 Virginia Mines Inc. (TSX:VGQ) announces the conclusion of a new acquisition agreement with Arianne Phosphate Inc. on the Opinaca (165 claims) and Black Dog (23 claims), properties in James Bay, province of Quebec. As per the agreement, Virginia acquires a 100% interest in both properties in consideration of the issuance to Arianne of 15,000 common shares of the capital stock of Virginia. Ressources Vantex Ltee owns a 1.5% NSR on the Black Dog property.

The Opinaca and Black Dog properties are located within the Achaean Eastmain volcano-sedimentary belt. Virginia has been active in this sector for several years, on its large Anatacau-Wabamisk project, located just west of these properties. Work carried out by Virginia on its Anatacau-Wabamisk project led to the discovery of an important pluri-kilometric network of auriferous quartz veins, comprising in particular the Mustang Vein, which returned up to 23.28 uncut (11.14 cut) g/t Au over 4.6 metres in channels and 22.65 g/t Au over 2.25 metres in drilling.

This agreement enables Virginia to increase its already held, dominant position in the region of the Eastmain River. Several exploration campaigns are planned in the next years to test the potential of the area.

Virginia also entered into an agreement to acquire from Rio Silver Inc. jointly with Altius Resources Inc. a wholly-owned subsidiary of Altius Minerals Corporation, the Kan property located on the Nunavik Territory, in Northern Quebec.

Under this agreement, Virginia and Altius acquire a 100% interest in the Kan property in consideration of Virginia’s issuance of 3,571 common shares of its capital stock and a cash payment of $25,000 to Rio Silver, and a cash payment of $75,000 by Altius to Rio Silver. This agreement also provides Ressources Tectonic Inc. with a 2% NSR on 209 claims included in the Kan property, half of which (1%) can be bought back by Virginia and Altius for $500,000 on or before April 2, 2015 or for $1,500,000 thereafter.

The Kan property is a large gold and base-metal exploration project covering a surface of more than 30,000 hectares in the Labrador Trough, 85 kilometres southwest of Kuujjuaq. A silicate-carbonate iron formation, of regional extension, represents an important auriferous metallotect on the property. Work conducted in the 1990’s led to the discovery of numerous significant gold showings within this iron formation with drill results reaching 5 g/t Au over 6 metres (Ferricrete showing) and 9.46 g/t Au over 2 metres (Kan showing). Recent work carried out by Rio Silver in 2011-2012 yielded 3.12 g/t Au over 13.9 metres in channels and 1.2 g/t Au over 10.4 metres in drilling on the Pump Pad Ridge showing. Interesting gold anomalies were also detected from soil geochemistry above the iron formation and several of them remain totally unexplained. The Kan project also offers an interesting potential for base metals, highlighted by the presence of massive sulphide showing, which yielded 5.2% Zn, 2.6% Pb, and 96 g/t Ag over 1.2 metres as well as 10.8% Zn, 7.36% Pb, 270 g/t Ag and 0,76 g/t Au over 0.3 metres. Rio Silver’s recent work led to the discovery, 5 kilometres south of this showing, of an erratic massive sulphide boulder, which yielded 12.23% Zn, 2.29% Pb, 80 g/t Ag and 0.35 g/t Au.

Virginia and Altius are planning an exploration campaign in the summer of 2014 on the Kan project.

Technical data included in this press release has been revised and approved by Paul Archer, Vice-President Exploration and Acquisitions of Virginia, a qualified person as defined by National Instrument 43-101.

Virginia conducts its exploration activities over the vast, unexplored territories of Northern Quebec in order to create value for its shareholders while protecting the quality of life for both present and future generations. With a working capital position of $40.4 million as at November 30, 2013, and a large area of mining claims in Quebec North, Virginia is among the most active mining exploration companies in Quebec. Strengthened by the discovery of the Eleonore project and more than 20 years expertise on the territory, Virginia’s exploration team is recognized as one of the best in Canada. Virginia also holds a 2.2% to 3.5% royalty in the Eleonore property.